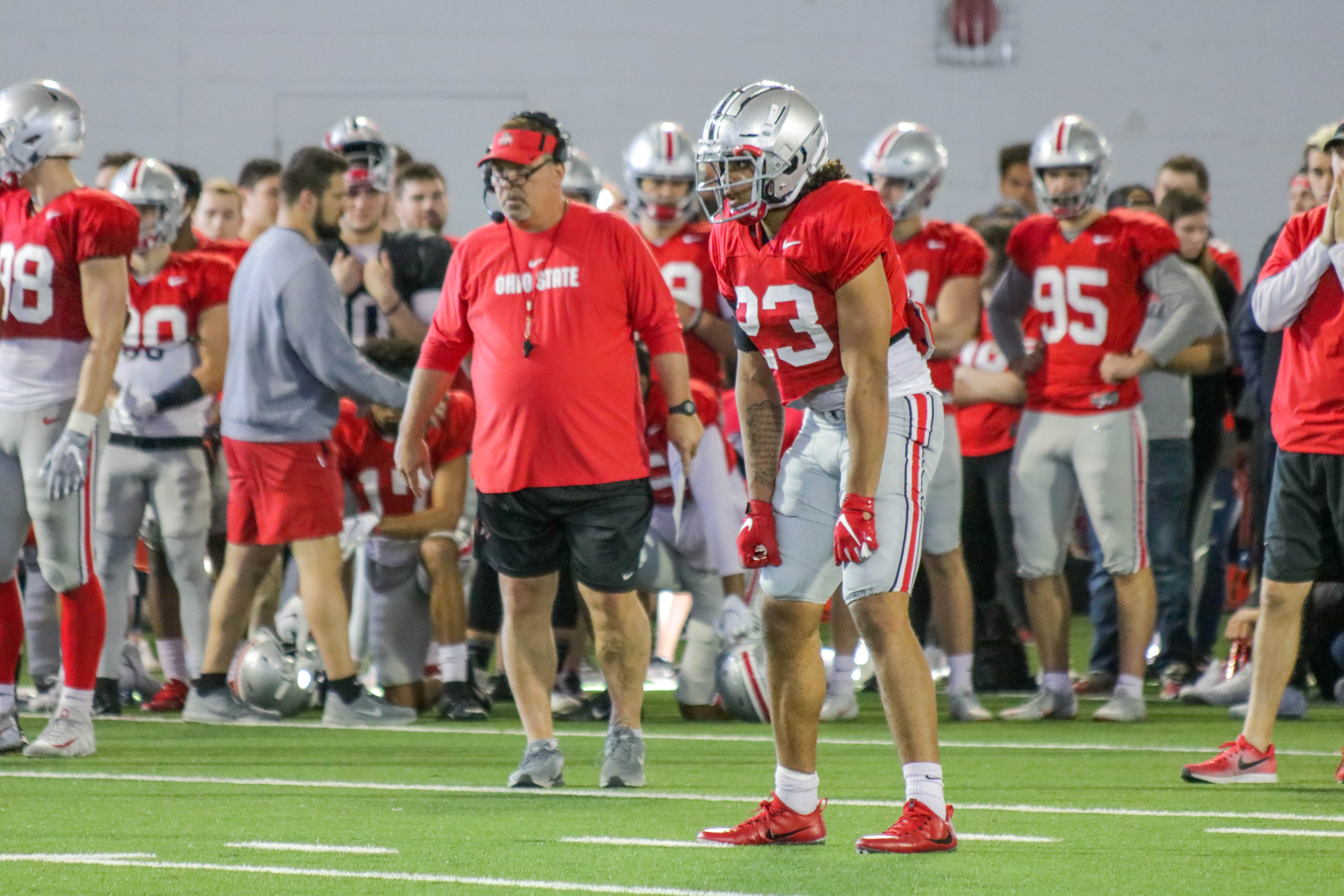 In the months after he flipped his commitment from Miami (Fla.) Nov. 4 and signed with Ohio State’s 2019 recruiting class Dec. 19, Marcus Crowley hit the ground running Jan. 7 when he enrolled early and started his Buckeyes career with spring camp March 6.

Through 15 practices, the four-star recruit from Jacksonville (Fla.) Trinity Christian Academy — the 247Sports composite’s No. 371 overall prospect, No. 26 running back and No. 44 player in Florida — flashed his immediate-impact potential while he rounded out OSU’s reloaded position group.

“He’s swimming, he’s swimming — as he should be,” Alford said March 21 after OSU’s fourth practice of spring camp at the Woody Hayes Athletic Center. “But the good thing that we’re doing is we have thrown him into the fire, so to speak, and he’s responding. He’s going to make mistakes.

“These are very prideful guys. When they make mistakes, it bothers them — as it should. But that’s what he needs — he needs to get thrown in that fire. But he’s got some skills. All of a sudden, he’ll flash and do something, like, ‘OK, here he goes.’ But he’s a tough kid.”

The 6-1, 205-pounder primarily played with the second-team offense throughout the early spring and into the end of camp — capped by the April 5 scrimmage inside the Woody Hayes Athletic Center and April 13 game at Ohio Stadium — but capitalized on an uptick in reps.

While the Buckeyes return their leader in junior J.K. Dobbins, they moved junior Demario McCall from H-back and looked for redshirt freshman Master Teague to step up.

Alford came away from camp hopeful for McCall (5-9, 195) and impressed by Teague (5-11, 220), who follow Dobbins (5-10, 217) in the post-spring depth chart, but Crowley also turned heads as he learned the offense throughout his first taste of Ohio State football.

“I feel like he’s doing good,” Teague said. “He’s really acclimated to the position and I think he has a bright future. Just got to keep working and learn from the older guys. I learned how to come out and be a Buckeye running back every single day. It’s about how you work and how you prepare.”

While sophomore Xavier Johnson (6-2, 212) and several other walk-on players complete OSU’s position group before Roswell (Ga.) Blessed Trinity Catholic four-star signee Steele Chambers (6-2, 215) arrives from the 2019 class for summer enrollment in June, Crowley is among its most important players — regardless of how much he plays throughout his freshman campaign.

“To say in the fall, who knows? That’s why we’re practicing right now in the spring,” Alford said of the 2019 potential for Crowley, who recorded a touchdown and 50 yards on 10 carries (5.0 average) in the spring game. “The thing is — learn the offense, which he’s doing, and then how fast will you go play? And you don’t (just get it).

“Listen, you’re going to make mistakes. We got it. That’s our whole mantra of 4 to 6, A to B. Mistakes are going to be made, but don’t have me question your effort and your want to and the speed of which you play. That we cannot have any question about. And he’s doing a nice job of that, thus far.”