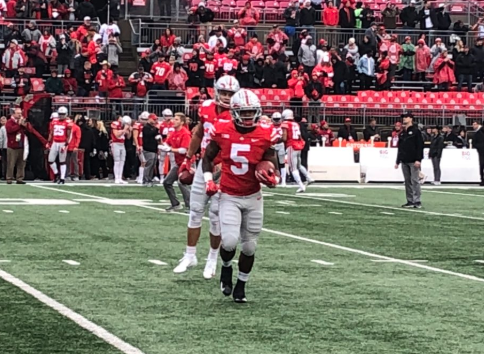 Running back Mike Weber joined defensive tackle Dre’Mont Jones as Ohio State’s second player to declare for the NFL draft, doing so Sunday night when he took to Twitter and announced his decision.

But like Jones, a fellow fourth-year junior, Weber won’t sit out the Buckeyes’ postseason game.

No. 6 OSU (12-1) plays No. 9 Washington (10-3) in the Jan. 1 Rose Bowl, and both Weber and Jones have cited unfinished business instead of getting started on training for the NFL scouting combine running from Feb. 26 through March 4 at Lucas Oil Stadium in Indianapolis. The draft itself takes place in Nashville, Tenn., from April 25-27.

When he was asked about his future Dec. 12 in front of reporters at the Woody Hayes Athletic Center, Weber said his mind hadn’t been made up as he approached the looming decision process.

“It’s just through my family, and talk to my family and see what’s best for me and my teammates, and stuff like that,” Weber said. “I’m just focused on winning this (Rose Bowl) game and doing everything I can personally to help the team win.”

Weber redshirted as a freshman that year, but he made his debut and splashed onto the scene in 2016. As a redshirt freshman, Weber shouldered 182 carries for 1,096 yards (6.0 average) and nine touchdowns with 23 receptions for 91 yards in 13 games.

After he injured his hamstring in July 2017, right as training camp began, Weber’s sophomore season was slowed. As he got healthier throughout the campaign, his leg recovered to 100 percent in November and Weber managed to take 101 carries for 626 yards (6.2 average) and 10 touchdowns with 10 receptions for 94 yards in 12 games. He broke out Nov. 11 that year with his nine carries for 162 yards and two touchdowns in OSU’s 48-3 rout of Michigan State, giving an inconsistent offense the spark it desperately needed as the fall ended in five straight wins.

Splitting touches with sophomore J.K. Dobbins into 2018, a healthy Weber amounted to Ohio State’s two-headed attacked at running back. Dobbins (5-10, 214) has led the way with 223 carries for 1,029 yards (4.6 average) and nine touchdowns in addition to 23 catches for 248 yards and two touchdowns in 13 games, but they both have expressed their preference to share the load when times have gotten tough.

“It helped me a lot,” Weber said. “The Michigan State game (a 26-6 win Nov. 10), I was pretty beat up after that game and that was a 22-carry game (for 104 yards and a touchdown). I thought we got used to having two backs in. That’s what a lot of programs are going to. A lot of big-time programs are doing that now, the way the game is evolving. The Big Ten is a rough conference and you need a couple backs to rely on.”

In 12 games, Weber has 157 carries for 858 yards (5.5 average) and five touchdowns with 20 receptions for 104 yards and a touchdown out of the backfield. He picked up right where his sophomore surge ended in 2017, rushing 20 carries for a career-high 186 yards and three touchdowns in Ohio State’s 77-31 blowout against Oregon State on Sept. 1 to open the 2018 campaign.

“I felt (my junior year) was OK, decent,” Weber said. “I did what I could with the opportunities I had and I just want to finish strong. You start it, got to finish it.”

“Every day is an opportunity,” Weber said. “I just have to take advantage of it.”