Ohio State Sophomores Stepping Up As Leaders Of Young Squad 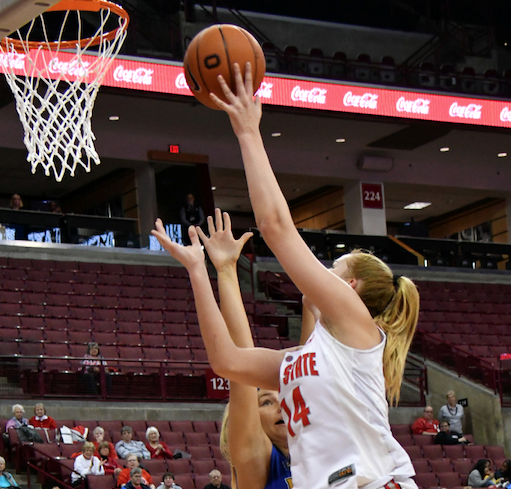 The Buckeyes are coming off a 14-15 season, where each student-athlete in the sophomore trio played important roles as true freshmen. The sub-500 season was in stark contrast from the back-to-back Big Ten-title seasons, where the Scarlet and Gray posted 28-7 ledgers.

Head coach Kevin McGuff brought in a group of highly touted freshmen for the 2019 class to complement Crooms, Juhász and Patty in building for the future. The true freshmen include the five-star trio of Kierstan Bell, Rikki Harris and Jacy Sheldon, the four-star duo of Madison Greene and Kaelynn Satterfield along with the European tandem of Aixa Wone Aranaz and Rebeka Mikulášiková.

McGuff has been impressed with how the team has built a bond since the freshmen arrived on campus in June.

“We had a really good summer; the chemistry really came together,” McGuff said. “They spent a lot of time with each other. With so many young people, we had a lot of people in the dorms, so they’re around each other all the time. That’s been something that’s been really good; I’m hoping that can be a real strength of ours this year.”

When asked about the sophomores stepping up as leaders, McGuff expressed how it is paramount for them to guide the incredibly young team with seven true freshmen.

“Janae, Dorka and Aaliyah are only sophomores, but they played a lot of minutes last year, so I kind of look at them as leaders as well,” McGuff said of his sophomore trio. “They can’t really be sophomores. They’ve got to be more like juniors and seniors, because we just don’t have a lot of upperclassmen. They’ve done a really good job.”

Crooms said she enjoys leading the new Buckeyes and showing them the ropes. She averaged 8.8 points and finished second on the team in assists as a freshman, and said she’s looking forward to running in transition with her new teammates.

“It’s fun, honestly,” Crooms said. “Just trying to be a leader to them because I have experience from last year. So, just try to tell them to keep the energy high, communicate and all the little intangibles.”

Patty averaged 8.8 points and finished second on the team in assists as a freshman, She was asked how she envisions her role on the young Buckeye squad.

“Being more vocal, that’s a big role,” Patty said. “I would also say, stepping up and showing them what the game is really like in terms of how fast it is, how physical it is, how different it is and how mentally dialed in you have to be.”

Juhász, who led the team with 11.7 points and 9.0 rebounds as a freshman, said that even though she is young, she is accustomed to a leadership role and enjoys doing what she can to help her teammates.

“I really like this role,” Juhász said. “I’m young, but I’m kind of used to it because back in Europe with my U18 and U20 teams, I was always the leader. I feel like I had those traits that I can use now. It’s different; it’s a different country, but I feel like one year was enough for me to know more about like Coach McGuff wants from us.