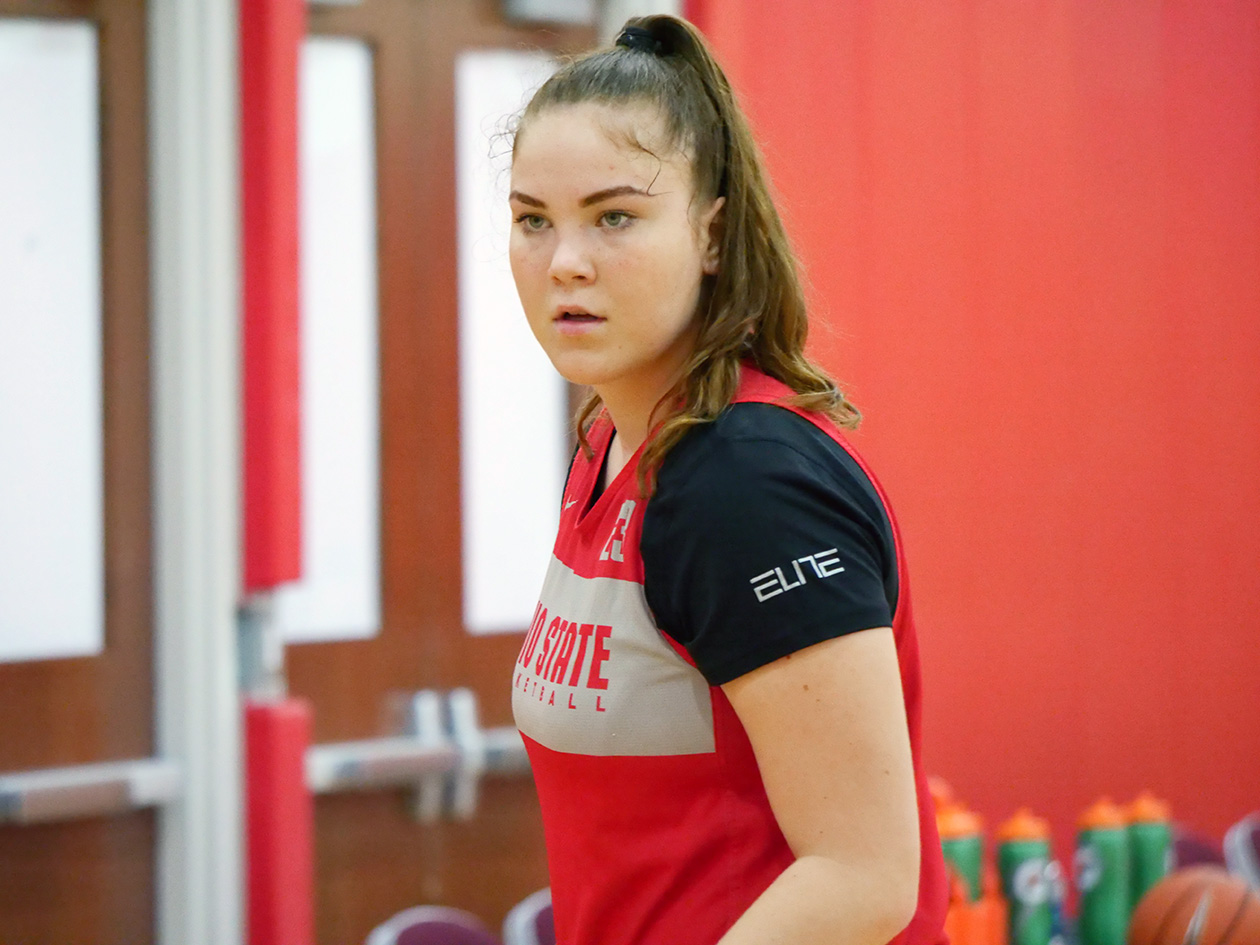 The Fresh Seven is a seven-part series about the seven freshman players entering their first season for Ohio State women’s basketball. Week three is on Rebeka Mikulasikova.

Rebeka Mikulasikova has been one of the youngest players on her team for the majority of her playing career.

Coming from Nitra, Slovakia, Mikulasikova started playing basketball at 10 years old when her friend told her: “You should try it, you’re tall.” The now-6-4 guard listened, slowly stopped gymnastics because she was “really, really tall” for it, and immediately was playing basketball with teenagers.

“It was a challenge, like a big challenge, but I guess that made me a better player,” Mikulasikova told Buckeye Sports Bulletin.

While with her club team Piestanske Cajky, she averaged 8.5 points and 6.5 rebounds per game while shooting close to 50 percent from the floor in her final season, all while being the second-youngest player on the team.

Now, she has found her way to Ohio State with six other players that are coming in just as new as she is to collegiate basketball. But Mikulasikova is not new to the level of talent.

Ohio State head coach Kevin McGuff said there is a whole lot to appreciate with Mikulasikova’s game, and that she should fit in perfectly with the Buckeyes.

“She’s a really talented young person, she’s got a very unique game because she’s about 6-4, and she’s got strength that she can be successful around the basket, but she also shoots the ball really well from the perimeter,” McGuff told BSB. “She’s a unique player and I think she’s got a chance to be really special.”

But because he only saw limited play time of Mikulasikova in Europe, McGuff needed to rely on some other resources to make sure that she was the player that he wanted on the program.

That led to one of the biggest factors in Mikulasikova’s move from Europe to the United States: Ohio State sophomore forward Dorka Juhasz. Juhasz, a Hungarian native, had played against the Slovakian Mikulasikova various times, with the most recent game coming three years ago, according to Juhasz.

This allowed McGuff to use Juhasz for extra info on Mikulasikova during recruiting, including on if she would fit well with the Buckeyes and the level of talent that Juhasz had seen out of her in Europe.

“We were definitely talking to Dorka about her, because you just don’t see them, we didn’t get a chance to see her as much as kids we would see in the states,” McGuff said. “We just kind of wanted to confirm about what we thought, and Dorka said ‘Yeah, she’s a really good player and would be a great fit here.'”

Mikulasikova has been dealing with a broken foot injury that has sidelined her for the past month, but she expects to be recovered within the next two weeks as the recovery has went “faster than our athletic trainer predicted.”

When she is ready, the team is getting a versatile forward with size that could significantly help Juhasz in the middle.

With three European forwards in Juhasz, Mikulasikova and Aixa Wone Aranaz from Spain, the team has new depth in the middle that Mikulasikova said is expecting growth from year to year, but is also expecting to see some results in year one.

“I think the good things about it are we all start at the same level, and we can move forward, getting better each practice,” she said. “I think maybe after this, our second year, we can be, even now we can be a really good team, because we have a lot of talent, so we just need to work hard, and we’ll see how it goes during the season.”

For the full story on Mikulasikova, as well as the rest of the freshmen at Ohio State women’s basketball, sign up for the weekly print edition of BSB. For four free issues, no card required, sign up at the link here: http://www.buckeyesports.com/subscribe-4issue-trial/