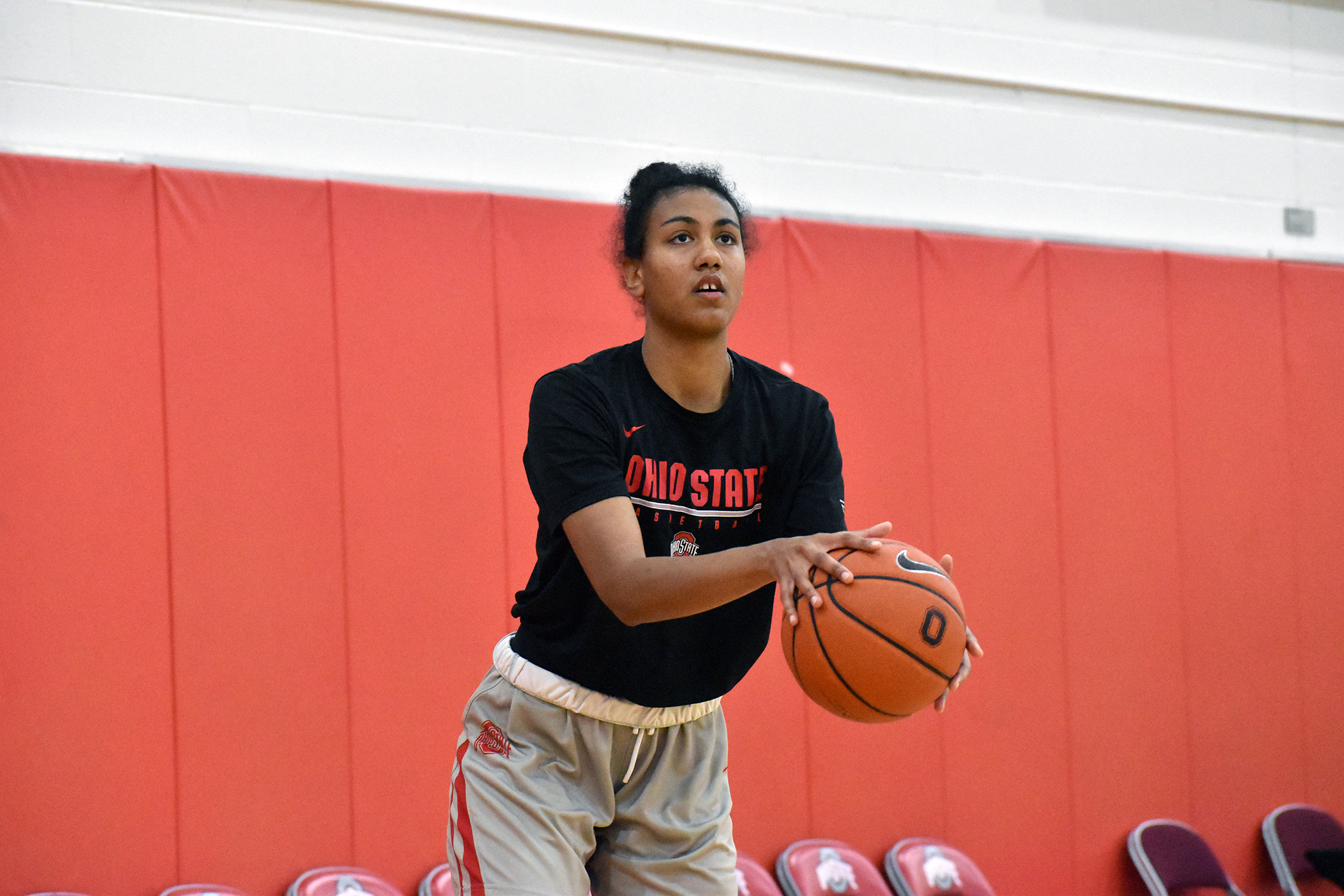 The Fresh Seven is a seven-part series on the seven freshman players joining the Ohio State women’s basketball team in the upcoming season. Week six is on three-star forward Aixa Wone Aranaz.

Aixa Wone Aranaz was supposed to have this story written about her last season.

The three-star forward out of Pamplona, Spain was committed to Ohio State a year ago and was ready to travel to a new continent and start her basketball career in the western hemisphere.

Instead, due to issues with forms and paperwork, Wone Aranaz was forced to wait a full season to make the move to Columbus.

“Originally we recruited her that she would be a sophomore now, but just sometimes with international recruiting, it takes a while to get everything,” Ohio State head coach Kevin McGuff told Buckeye Sports Bulletin. “We ended up pushing it back a year, and so it’s been a long process, but we’re really happy to have her right now.”

Wone Aranaz said the year of extra time she had in Spain was both difficult, but also was helpful in getting her ready to make such a big leap into moving across the globe.

“At first it was hard because I have in my mind that next year I’m going to Ohio State,” she said, “but it also was like I have one year for preparing myself to say ‘OK, I’m going, and it will be better, and I have more time to prepare for this year.'”

Now that she’s here, Ohio State is bringing in a player that has been on Spain’s FIBA World Championship teams since before she was a teenager, when Wone Aranaz made the U13 squad.

But it was only shortly before that happened that Wone Aranaz seriously picked up the sport in the first place.

“I think that started when I was 10 years old,” Wone Aranaz told BSB. “I wanted to do a sport, but I didn’t know what sport, so they told me ‘You’re tall, you can try basketball.’ So I said, ‘OK, we will try basketball,’ and I loved it.”

Wone Aranaz, now 19 years old, won the FIBA championship in 2016 on her U16 team, earned a silver last year and got a bronze this season on the U20 group.

Eventually, she chose to leave Europe, which led her to Ohio State after an official visit in May 2017 that she said helped make her decision. What also helped was an atmosphere the Buckeyes had with their coaching that Wone Aranaz thought would improve her game.

The addition of Hungarian forward Dorka Juhasz was another factor that assisted in the Spanish forward getting accustomed to life outside of Europe.

“I didn’t have any Spanish girls here, so it was like ‘OK, one European can help me because she will understand how the game in Europe is and how the transition is,’” Wone Aranaz said. “It’s so helpful because she really knows how you feel in some situations and she can tell you ‘It’s not that bad, it will be better,’ or ‘you can do this.'”

McGuff echoed that sentiment, saying that having Juhasz on the roster has helped with both Wone Aranaz, as well as freshman forward Rebeka Mikulasikova, who has come in from Slovakia.

“I think it is just a level of comfort that when other students then come that they know that we’re conscious of what they go through to come from another continent and that we are aware of that and ready to embrace that and make sure they’re comfortable and successful,” McGuff said. “I mean it’s probably as much off the court as anything, they really support each other knowing that they’re going through a different thing than the rest of the players.

According to McGuff, Wone Aranaz has the type of play that will work well within both the team Ohio State has, as well as in general for games at the college level.

“She plays really hard, she runs the floor, she plays with toughness, she defends, she rebounds,” McGuff said. “Just really, really liked her intensity and how hard she played.”

As far as her outlook on the season goes, Wone Aranaz said she doesn’t want to make any assertions before seeing what any of her collegiate opponents look like.

“I think that it will be hard because we are new people, new faces, and we really don’t know how the competition is,” Wone Aranaz said. “I think that at first, it will be hard, but if we work hard and we are a real team or we’re good teammates, then we can do a lot.

“We should be the best that we can be, because I really don’t know the competition, so I can’t tell you it’s going to be like this or that.”

For the full story on Aixa Wone Aranaz, as well as the other seven freshmen on Ohio State, subscribe to the print edition of Buckeye Sports Bulletin.