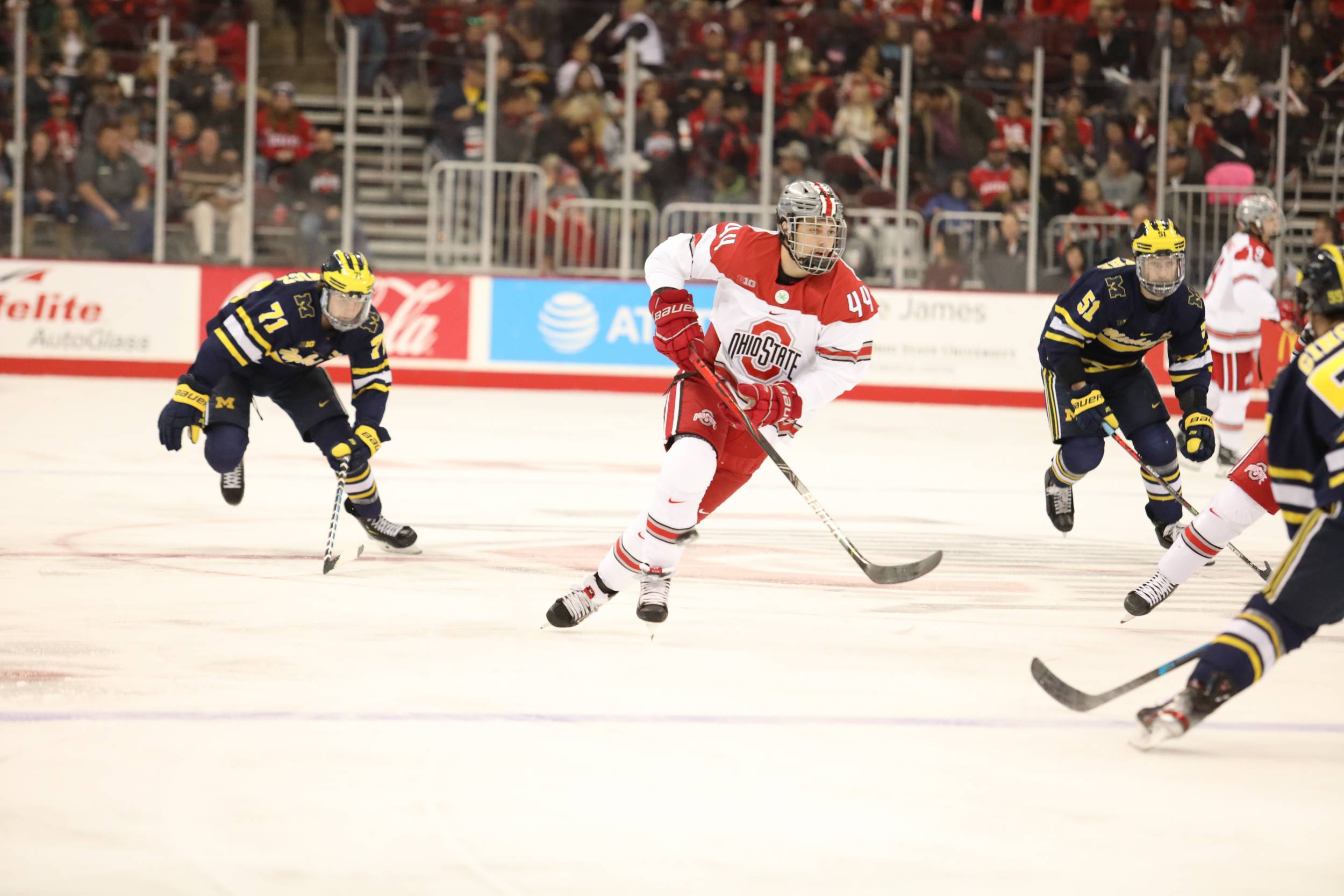 As the seasons turn fully into fall and even towards winter, Ohio State’s sport seasons shift too, away from soccer and other outdoor sports into hockey, wrestling and mire cold friendly affairs. This week in Ohio State Olympic sports saw the Buckeyes put up a 6-4 record, spearheaded by sweeps from both hockey teams. It also saw the end of the regular season for both soccer teams and a Big Ten tournament bid securing win for field hockey.

The women’s golf team ended the fall season on a tough note, putting up a 12th place (of 14) finish at the White Sands Invitational. Ohio State was led by Aneka Seumanutaf, who shot 3-under and finished tied for 11th. The Buckeyes shot +19 overall on the tournament. They will play next on Feb. 9, at the Northrup Grumman Regional Challenge in Palos Verdes, California.

It was a bitter end to a promising season for the men’s soccer team, as it suffered a 5-1 loss to a top Indiana team and a 1-0 battle with Wisconsin to end the season. After a season that saw the Buckeyes win just one game in 2018, a 6-10-1 season is certainly frustrating for Ohio State given the way it ended with six straight losses, but improvement is improvement regardless.

The Buckeyes face No. 9 seed Rutgers in the Big Ten Tournament on Nov. 9.

“The end of a season is always hard and very abrupt,” Lori Walker-Hock, Ohio State head coach, said. “The preparation is long and meticulous building and growing every day. Then it all just suddenly ends. This time is hardest for our three special seniors. Marike, Haley and Selina have each touched our program in so many ways over these last four seasons. We celebrate their collective body of work and appreciate all they have given of themselves to our team. Thank you, seniors.”

The volleyball team managed to snap their weekend losing streak, knocking off Maryland in straight sets on Nov. 2 to improve to 12-12 on the season. It couldn’t, however, continue its weekday win streak, dropping a match to Maryland on Oct. 30 in five sets. Beating the No. 6 ranked Golden Gophers would’ve served as a massive victory for the young Buckeyes, but they’ll have to settle for another 1-1 week.

The Buckeyes play next on Nov. 8 when they host Wisconsin.

The women’s hockey team swept Bemidji State over the weekend. Ohio State started off the series with a 4-3 overtime win, led by goals from Jincy Dunne, Liz Schepers and two from Jenn Gardiner.

“Bemidji is a strong team and a very similar style to us where they don’t quit and they’re very relentless,” head coach Nadine Muzerall said. “Even though we took the lead a few times they always come back, so you can’t get comfortable with them. It was just a dire need to win and so they found a way and I’m proud they got it done.”

The second was less close, as the Buckeyes rode goals from Schepers, Tatum Skaggs and Emma Maltais to a 3-1 win. Ohio State sits at 7-3-2 on the season and will face off with Minnesota Dultuh for the next weekend series in two weeks.

“I think our conditioning came into play today,” head coach Nadine Muzerall said. “We were all over them and held them to only eight shots through 40 minutes of hockey, so that’s quite impressive that we did that. We just knew the urgency and the importance of getting the sweep on the road.”

The Buckeyes pulled off a massive sweep over the weekend, sending Michigan back to Ann Arbor with nothing to show for its trip to Columbus. The Buckeyes came from behind to win game one, 3-2.

“I liked our guys’ jump from the start,” head coach Steve Rohlik said. “I thought they played hard tonight and I could see that from the drop of the puck. Even when we went down 2-0, all I heard on the bench was ‘We’ve got this. We’ve just got to keep playing the same way.’ I give our guys a lot of credit. It’s not easy to win in this league, especially when you spot a team two goals like that.”

“Any time you win two on a weekend it’s huge,” Rohlik said on sweeping Michigan. “But, as we all know, it’s such a great rivalry between two good programs. It feels pretty good.”

The Buckeyes are up to 6-1-1 on the season. You can read full recaps of all Ohio State men’s hockey games from the BSB beat reporter, Craig Merz.

The field hockey team saved its season with a a 3-0 win over Michigan State on Nov. 2. Ohio State needed a win to make the Big Ten tournament and got just that, thanks to great showings from Sarah Charley, Mackenzie Allessie and Whitney Harris.

“Good shutout win against Michigan State today,” head coach Jarred Martin said. “We created some really good goal scoring opportunities. Their goalkeeper made some big saves, but overall I was pleased with how fast we were able to generate attack and use our speed to our advantage. To finish the regular season the way we did is something to be proud of as we head into postseason play. This conference tournament is going to be a great weekend of high-level hockey and now we need to prepare and rest for Thursday’s quarterfinal matchup. It’s a new season in the postseason and everyone starts fresh. We will be ready to make the most out of our opportunity.”

The Buckeyes finished the regular season at 9-8 and will face the No. 2 seeded Iowa Hawkeyes on Nov. 7.