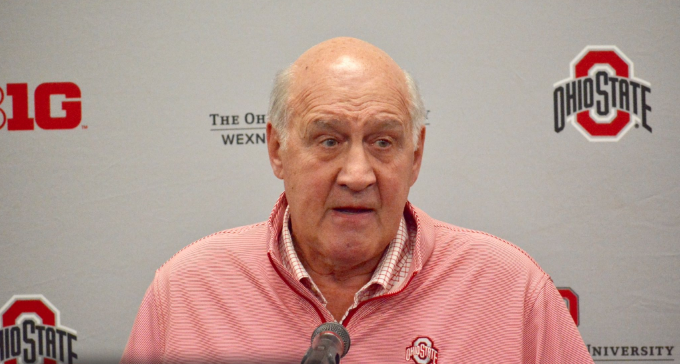 When Ryan Day went from second-year offensive coordinator/quarterbacks coach to first-year head coach Jan. 2, he had a vision for what his Ohio State defense should look like in 2019.

After the Buckeyes regressed in 2018 with big plays atop the unit’s long list of weaknesses, Day’s defensive staff saw an overhaul as four new assistants arrived in Columbus.

The first domino fell Jan. 7 when OSU announced Greg Mattison and Jeff Hafley as co-defensive coordinators, bringing cohesion to the unit with a blend of old and new.

In his 48th year of coaching, Mattison has seen defensive schemes evolve from high school to college football and the NFL, bringing perspective as he and Hafley lead the Buckeyes’ turnaround.

“All of those (schemes) depend, really, on the type of players you have,” Mattison said. “It’s never been schemes that have won. It’s what you teach the players to run and then who’s running them. And I’ve been really, really impressed with our players. They are so willing to do whatever you’re asking them to do and they’re so into trying to be the best they can be. I don’t think there’s any comparison to anything. I think there’s a set (of) things. If you looked at NFL teams, if you looked anywhere, you’d say, ‘Yeah, they do this, they do this, they do this. Good teams do this.’ And that’s what we’re trying to do.”

After a 2018 campaign in which the Buckeyes’ defensive staff never seemed to stay on the same page with midseason reports of friction and tension, Mattison leads a fresh start.

“I’m a very fortunate person because I have the ability to work with a great staff,” Mattison said. “When you walk in the door every day and you’ve got one of, if not the best, defensive line coach in your meeting room, coaching the guys that you need him to coach, Larry Johnson. You’ve got Jeff Hafley, who’s got tremendous experience in the back end. And then you’ve got Al Washington, who is a really, really intelligent, great young coach. And then you’ve got Matt Barnes, who’s been a coordinator as such at another Big Ten school prior. So we have a great staff and the staff is not a staff made up of a bunch of egos, and that’s what really, really kind of hurts staffs. This staff here is truly a staff that wants Ohio State football and the players we’re dealing with to be the very, very best they can be — and you feel that every day you come in, and I love it.”

Mattison has spent time with Washington and the linebackers while Hafley has split duties in the defensive backfield as secondary coach next to Barnes, remaining cognizant of ideas from all staff members — including Johnson — when meetings take place.

As competition continues across OSU’s final three practices Monday, Wednesday and Friday before the spring game Saturday at noon from Ohio Stadium, Mattison makes progress on the defense Day wants to see come Aug. 31 in the season opener against Florida Atlantic.

“He definitely wanted us to be able to play the defense that he’s seen me be associated with,” Mattison said. “And again, it’s pretty evident with Larry is that it always started up front. You want to be a very physical team against the run and you want to be a pressure team, whether it’s a pressure with a four-man rush or it’s a pressure with blitzing or whatever. But you want to not let quarterbacks sit back there and feel pretty good about themselves. I know he’s seen that. We’ve been against each other. He’s seen us on film. He knew that’s what I believed in. And then with Coach Hafley being so ahead of time with the secondary and understanding all that, it was a really good mix and it looked like, to me, it was a great deal.”