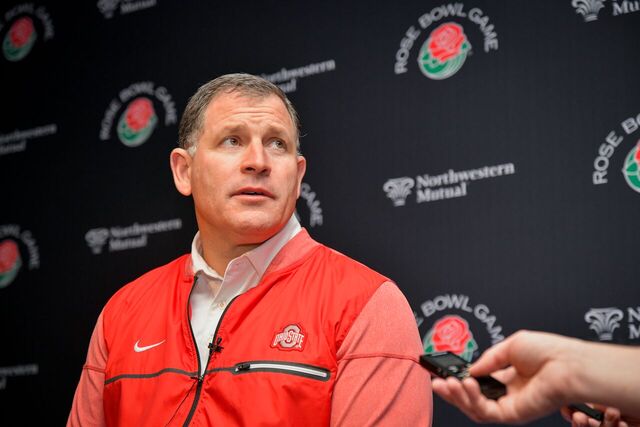 With the offseason in full swing, the first few dominos of Ohio State’s coaching staff changes have fallen Monday, according to reports.

Defensive coordinator Greg Schiano is not expected back with the Buckeyes for a fourth year in 2019, Buckeye Grove’s Marc Givler first reported. The 52-year-old Schiano spent 2016 and 2017 running OSU’s defense and coaching its safeties, transitioning solely to coordinator in 2018 as co-defensive coordinator/safeties coach Alex Grinch joined for one season before Oklahoma hired Grinch for its vacancy at defensive coordinator last Friday.

Related to Schiano, Ohio State appears to have found its potential replacement in that department with Michigan defensive line coach Greg Mattison. With defensive line coach Larry Johnson slated to return for a sixth year in Columbus, Wolverines Wire’s Isaiah Hole first reported that Mattison had accepted a job among Buckeyes head coach Ryan Day‘s assembling assistants — possibly as a position coach and/or co-coordinator, although the role remains undetermined.

If Mattison becomes co-defensive coordinator, it appears Jeff Hafley will join him. Pete Thamel of Yahoo Sports first reported that the 39-year-old Hafley, who has been in the NFL for the past three years as the San Francisco 49ers’ defensive backs coach from 2016-18, was slated to be OSU’s co-defensive coordinator — Day was the quarterbacks coach when he and Hafley worked together in San Francisco under former 49ers head coach Chip Kelly, who spent 2017 out of football before becoming UCLA’s head coach in 2018.

Ohio State has also reportedly been targeting U-M linebackers coach Al Washington. Washington, whom Michigan hired in 2018 after he spent his 2017 season as Cincinnati’s defensive line coach under longtime Buckeyes coach (1999, 2002-16) and current Bearcats head coach Luke Fickell, is a Columbus native whose father Alvin played linebacker for OSU from 1976-80.

Mattison arrived in Ann Arbor, Mich., for the 2011 season under former Wolverines head coach Brady Hoke and spent four years from 2011-14 as the team’s defensive coordinator. U-M fired Hoke and hired Jim Harbaugh as its head coach in 2014, keeping Mattison on the staff to coach the defensive line through the 2018 season with an expiring contract.

The 69-year-old Mattison began his football career as the high school head coach of Muscoda (Wis.) Riverdale from 1971-73 and La Crosse (Wis.) Logan before leaping to college in 1976 as a graduate assistant at Illinois. He first joined Michigan as its defensive line coach from 1992-94 under Gary Moeller (1990-94) and was additionally promoted to defensive coordinator from 1995-96 under Lloyd Carr (1995-2007).

Between those later stints with Florida and Michigan, Mattison went to the NFL from 2008-10. Under head coach John Harbaugh (2008-present), Jim’s older brother, Mattison was the Baltimore Ravens’ linebackers coach in 2008 before he was promoted to his two-year post as defensive coordinator from 2009-10.