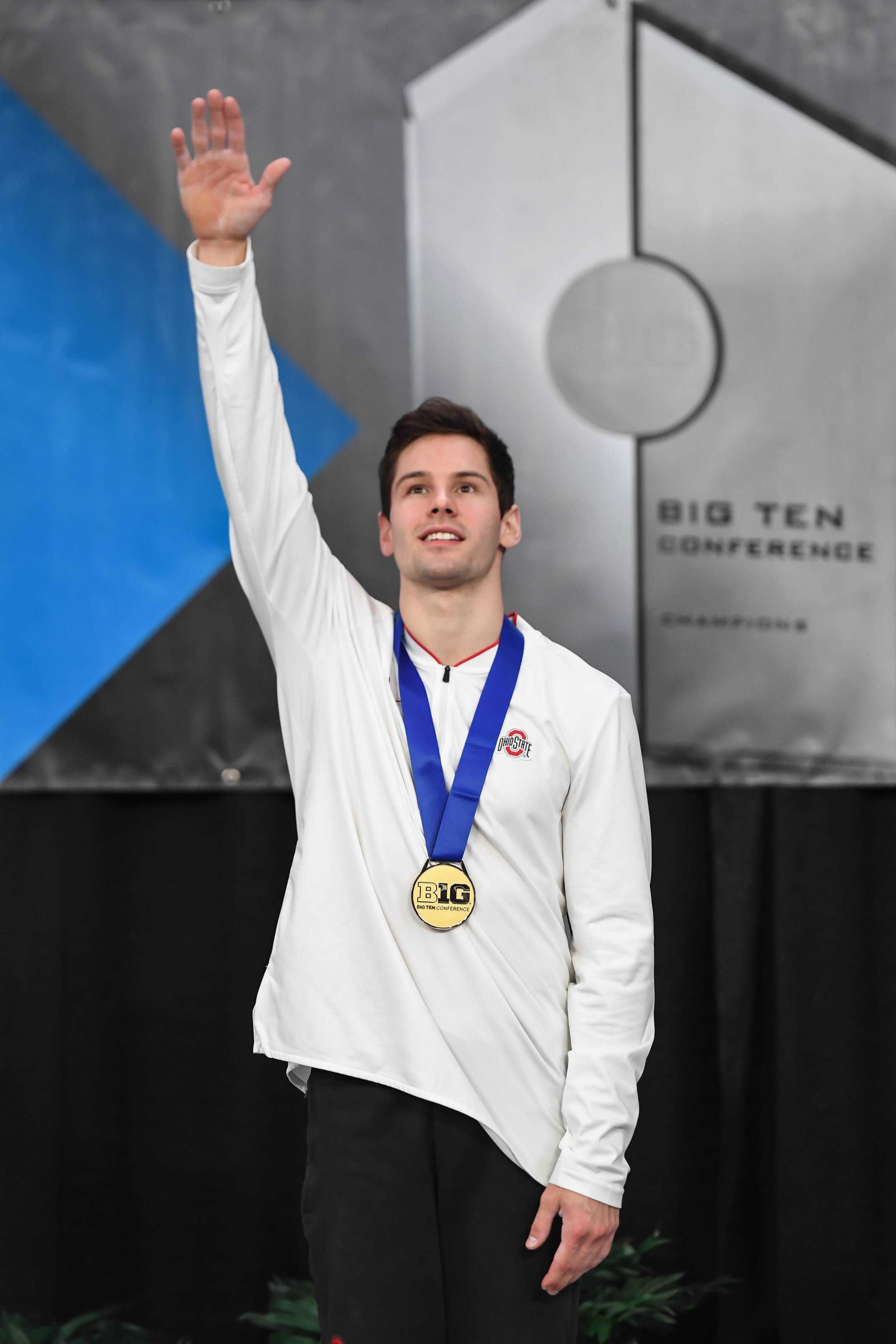 Ohio State boasts a plethora of talented student-athletes and athletic teams, many of whom are historically quite successful. While the men’s tennis team is becoming a national power, the men’s golf and men’s volleyball team put together bounce-back efforts after undergoing tough stretches. A lot happened this past week across Ohio State’s Olympic sports, including a Buckeye gymnast winning gold. What follows are brief recaps of the past week’s events with links to the press releases included.

The No. 1 men’s tennis team defeated Nebraska, 6-1, at the Dillon Tennis Center in Lincoln, Neb., on April 5.

The Buckeyes only lost two games combined between the three doubles matches in route to claiming the first point. Martin Joyce and JJ Wolf rolled 6-0 on court one, while Hunter Tubert and John McNally posted a 6-1 win on court three. Kyle Seelig and Alex Kobelt were leading 5-1 when the point was decided.

The No. 1 Buckeyes knocked off Iowa, 4-1, in Iowa City on April 7. Ohio State improved to 22-2 and 7-0 in the Big Ten with this win against the No. 48 Hawkeyes. The victory marks win No. 18 for the Scarlet and Gray against ranked opponents this season.

The No. 21 Ohio State women’s tennis knocked off Wisconsin, 6-1, inside the Varsity Tennis Center on April 5. The Badgers dropped to 13-3 on the season and 5-1 in the Big Ten, marking their first conference loss.

The Scarlet and Gray defeated Minnesota, 5-2, in an outdoor match at the Varsity Tennis Courts on April 7. The Buckeyes improved to 17-3 on the season, winning 14 of their last 15 matches, and 6-1 in the Big Ten.

Shiori Fukuda, Isabelle Boulais and Danielle Wolf all won in singles and doubles for the Buckeyes for the second time on the weekend.

The Scarlet and Gray fell, 13-5, against Northwestern in its Big Ten home opener at Nick Swisher Field at Bill Davis Stadium on April 5. The Wildcats capitalized on four errors by the Buckeyes, including two miscues in the eighth to surrender the lead. After the game was tied at 5, Northwestern scored two runs in the seventh, two in the eighth and six runs in the ninth to spoil the Buckeyes’ Big Ten home opener.

The Ohio State baseball team fell, 10-4, against Northwestern at Nick Swisher Field at Bill Davis Stadium on April 7. The Wildcats rallied with four runs in the seventh and five runs in the eighth to sweep the Buckeyes. The Buckeyes dropped to 16-16 overall and 2-4 in the Big Ten, while the Wildcats improve dto 14-14 overall and 4-2 in conference play.

Emily Clark hit a go-ahead two-run homer in the ninth inning, leading to Ohio State’s 5-2 win against Pittsburgh at Vartabedian Field on April 3.

Ohio State defeated Rutgers, 2-0, to open its three-game weekend series against the Scarlet Knights on April 5. The pitching of Lauren Rice and Morgan Ray led the way for Buckeyes, and clutch hitting in the fifth inning helped give Ohio State the win.

Rutgers knocked off Ohio State, 8-6, in a back-and-forth game that went to extra innings on April 6.

In shutout No. 10 of the season, the Ohio State softball team defeated Rutgers by run rule, 8-0, in five innings to clinch the series on April 7. The Buckeyes improved to 23-11 on the year and 7-2 in the Big Ten, while the Scarlet Knights fell to 17-19 overall and 1-8 in the conference.

The No. 7 Ohio State men’s lacrosse team fell 13-8 to No. 1 Penn State in a hard-fought match at Panzer Stadium in State College, Pa on April 7. The Buckeyes are now 7-2 on the season and 0-2 in the Big Ten, while the Nittany Lions improve to 9-1 and 2-0 in the conference. Junior Tre LeClaire led the Buckeyes with a game-high four goals.

Track and Field (Men’s and Women’s)

The Ohio State track and field team (both men’s and women’s) competed in the Battle of the Bayou, hosted by LSU. The men’s team concluded the meet with a second-place finish with 122 points, just seven points behind the victors, Kansas. The women’s team scored a combined 104 points to take fourth.

The Ohio State men’s golf team got back on track at the Irish Creek Intercollegiate as four players shot career or season lows to lead the team to its best score of the season with a ten-under, 842. Four Ohio State players finished inside the top-10 for the first time since 2012, when four players finished inside the top-6 at the Wildcat Invitational.

Fellow senior Will Grimmer returned to form this weekend, matching Ramirez at five-under to finish tied for fourth in the tournament.

Senior Will Voetsch was excellent himself, finishing right behind Ramirez and Grimmer at four-under par to tie for seventh place and set a new career low.

Senior Daniel Wetterich also finished the tournament under par, finishing at three-under to tie for tenth place and shoot his best score of the season at 210.

Although the Ohio State men’s gymnastics team did not win the Big Ten Championships as a team, senior co-captain Alec Yoder stepped up and won the 2019 Big Ten pommel horse title. Yoder also put together a solid routine on the parallel bars and earned second place. In addition to Yoder’s accomplishments, Sean Neighbarger placed fourth in the vault, and senior co-captain Joey Bonanno earned the Big Ten Sportsmanship Award.

The Ohio State women’s lacrosse team’s win streak came to an end against Penn State, falling 21-5 at Panzer Stadium in University Park. Ohio State junior goalie Jill Rizzo made 15 saves and sophomore Lindsay Epstein scored two goals to lead the team. The Buckeyes fell to 8-5 overall and 0-3 in the Big Ten, and Penn State improved to 5-6 and 1-3 in the competitive conference.

The Ohio State rowing team won four races and finished 9-6 overall at the Big Ten/ACC Dual. The Buckeyes raced against Duke, Syracuse and Virginia, and both the First Varsity Eight and First Novice Eight finished undefeated through both sessions.