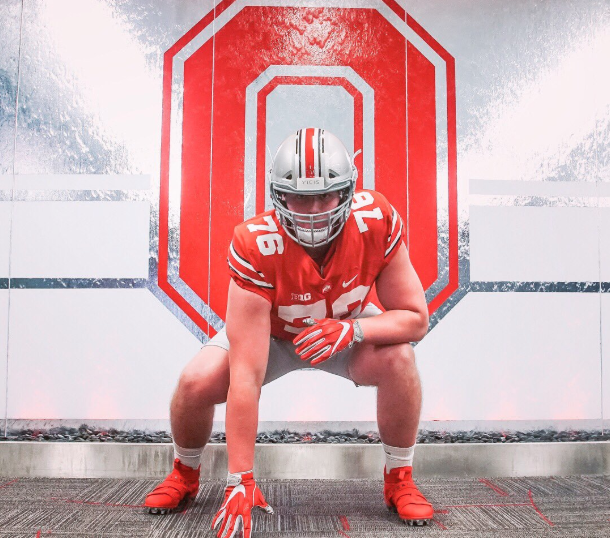 From the suburbs of Atlanta to the middle of the Caribbean, Harry Miller has spent the past three months thousands of miles away from Ohio State spring camp, but he hasn’t let those circumstances dictate his preparation for the next chapter.

While the Buckeyes are 11 practices through the spring without him, the five-star center signee from Buford, Ga., might as well be in Columbus with the way he’s gotten ready.

Every day after OSU completes its drills at the Woody Hayes Athletic Center and breaks out for positional meetings, Miller dissects film with Greg Studrawa on FaceTime, video chatting with his future offensive line coach as he approaches summer enrollment in June.

“(Miller) watches everything we do,” Studrawa said Monday after Ohio State’s ninth practice of camp. “Every time we meet, I got those guys in here on FaceTime video. So as we’re meeting, they’re on FaceTime, watching it. And then he watches all the practices. We talk on the phone or we talk on FaceTime, we’re in the meetings and we go over it. So when he gets here, he hits the ground running, knows exactly what to do.”

Given the circumstances, Studrawa has been happy with his offensive line throughout the course of spring camp.

Despite the departures of four starters from graduation to the NFL draft, a lower-back injury for junior left tackle Thayer Munford (6-6, 310) that ended his spring before it could even start and a bout of the flu that’s dropped the offensive linemen like flies, the Buckeyes have done what they can to build their depth.

While the June arrival of Rutgers graduate transfer center/guard Jonah Jackson (6-4, 305) for summer enrollment will give OSU a much-needed boost with a likely starter along its interior, head coach Ryan Day and Studrawa see Miller’s immediate-impact potential while evaluating the offensive line during camp.

“Harry can absolutely come in and compete right away,” Day said Monday. “First off, he’s very intelligent and he’s spent a lot of time FaceTiming with Coach Stud — two and three times a week, trying to pick up the offense. He’s in Nicaragua right now on a mission, but he’s still looking over his stuff, even in another country.”

With an offseason workout regimen handed down from strength coach Mickey Marotti, Ohio State has been closely monitoring Miller’s physical progress since he inked his letter of intent Dec. 19 as the 247Sports composite’s No. 30 overall prospect, No. 2 center and No. 6 player in Georgia for 2019.

“He’s really been working hard in terms of lifting and getting himself physically ready with Coach Mick and videoing himself working out, and that’s kind of part of our deal here,” Day said of Miller. “We expect him come in here and play right away, and that was part of the conversation in the recruiting process.”

Studrawa echoed those sentiments, raving about Miller’s ability from the weight room to the film room.

“I have a gut feeling that he can (compete right away),” Studrawa said of the 6-4, 310-pound Miller. “That’s all I can say. He’s mature. He’s strong. I think they did a bench test and they sent it into Mick — he did 225 (pounds) 26 times. I watch some guys at the (NFL scouting) combine and guys that work out (at Ohio State) that don’t even get that.”

“So that’s another thing that tells me,” Studrawa said. “He’s really smart. The fact that he’s down there (in Georgia and Nicaragua) rating the plays, studying the film, calling me at night, ‘Coach, what happened on play 19 in period six?’ That tells me he’s got a chance (to immediately compete).”

In the time since then, Jacoby has been immersed with the offensive line, gaining experience at guard and tackle as an early enrollee after the spring semester started Jan. 7.

While the offensive line takes shape, Miller rounds out a diverse set of bodies in the trenches as he brings his all-around skillset with him.

“In terms of recruiting offensive linemen, there’s a lot that comes into it,” Day said. “There’s certain body types there. There’s guys who are just tackles and they kind of have those body types, long levers and they’re athletic, which is kind of what we look for in our tackles. Then there’s the swing guys — they can play multiple positions. Usually, those guys are in the 6-5 range — they can move inside, they can go outside. (Fifth-year senior guard/tackle) Branden Bowen (6-7, 315) a good example, I think, of somebody like that.

“The guards are more of the thicker guys. (Sophomore guard) Wyatt Davis (6-4, 315) is a great example of that, kind of a road-grader in there. He can move a three-technique, he can power in there, he can block a nose guard and knock back the quarterback’s lap. And the centers are usually more athletic. They’re kind of built lower to the ground, not as tall. Mike Jordan was kind of different. He was an outlier there. We usually have guys like (second-year Cincinnati Bengals center) Billy Price (6-4, 308) and (sophomore center) Josh Myers (6-5, 310). Those kind of guys are built more lower to the ground where they can move quickly and get their hands on you.”