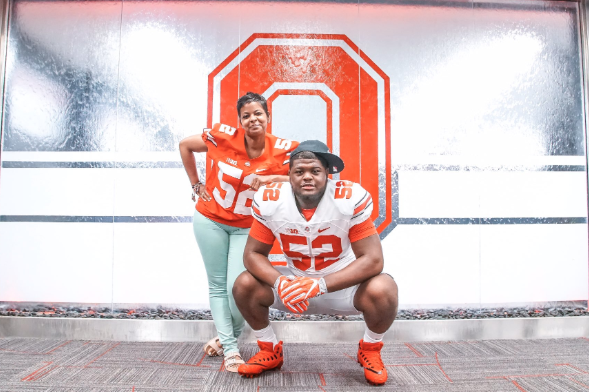 Hundreds of high school football players head to Massillon (Ohio) Washington for the weekend as the national circuit continues with Sunday’s camp at The Opening Regional Canton.

Among the athletes on camp roster, plenty of Ohio State recruits — top targets, priority prospects and offer candidates — are slated to take the field and compete for a spot in The Opening Finals at The Star in Frisco, Texas, from June 30-July 3.

Before the all-day regional camp kicks off in the morning and runs deep into the afternoon, BSB examines each position with a rundown of the names to know on the Buckeyes’ recruiting radar.

OSU has its quarterback for 2020 in Scottsdale (Ariz.) Chaparral four-star commitment Jack Miller, who earned QB MVP at The Opening Regional Los Angeles as he punched his ticket to the Elite 11 Finals. But look at Ohio State’s scholarship situation with its current signal callers and realize the Buckeyes may need to take two for the upcoming cycle, which makes Evan Prater worth watching at The Opening Regional Canton.

The three-star recruit from Wyoming, Ohio, is the younger brother of junior wide receiver Garyn Prater and has quietly been racking up offers as the 247Sports composite’s No. 511 overall prospect, No. 13 dual-threat quarterback and No. 15 player in Ohio for 2020. Prater (6-5, 190), who reports 20 offers with breakthrough scholarships coming March 5-6 from Oklahoma State and Miami (Fla.), is Ohio’s No. 2 signal caller behind Pickerington Central three-star Demeatric Crenshaw (6-2, 205).

An interesting addition to the camp roster for 2020 is Surprise (Ariz.) Willow Canyon four-star Darvon Hubbard (6-0, 200), formerly of Akron (Ohio) Buchtel and Scottsdale Chaparral, who has family in the Akron area. Hubbard originally committed July 25 before he reopened his recruitment Feb. 21.

Loaded with recruits on Ohio State’s radar in some capacity, wide receiver’s range runs from 2020 to 2022. Muskegon, Mich., three-star athlete Cameron Martinez (5-11, 175), Rockwood (Mich.) Carlson three-star Ian Stewart (6-3, 200) and Bay City (Mich.) Central three-star Devell Washington (6-4, 200) have each added an offer from the Buckeyes for 2020 over the past year — although OSU appears to have cooled on Washington, who last visited in the fall, among the bunch since the calendar flipped to spring.

A pair of three-star prospects from Ohio — Pickerington North’s Chris Scott (6-2, 175) and Columbus Walnut Ridge’s Qian Magwood (6-0, 175) — are talents to know despite lacking an offer from Ohio State. Scott started to hear from Ohio State in September before his offers started rolling in, with Michigan (Dec. 6) among the nine scholarships when he was recruited by then-Wolverines linebackers coach Al Washington — who has since joined the Buckeyes’ staff of assistants — while Magwood has made multiple visits to campus with the latest coming Dec. 15.

Among the underclassmen, two in-state recruits — Pickerington Central 2021 target Lorenzo Styles (6-1, 170) and Westerville South 2022 athlete Kaden Saunders (5-10, 165) — are emerging priorities for OSU in each class. Styles earned an offer Dec. 7 and since visited twice — Feb. 2 and March 23 — while Saunders should surge in 2022 after early scholarships from Michigan State (Feb. 17) and Penn State (March 16).

As an underclassman, Justin Rogers (6-2 1/2, 311) dominated The Opening Regional Canton last May — he held his own against Lewis Center (Ohio) Olentangy Orange 2019 five-star recruit and current Ohio State freshman defensive end Zach Harrison — and expressed high interest in the Buckeyes after he received his July 2017 offer. Rogers — the 247Sports composite’s No. 23 overall prospect, No. 1 offensive guard and No. 1 player in Michigan for 2020 — remains atop OSU’s board at the position for the current cycle.

Two of Ohio State’s four offensive linemen committed for 2020 are penciled in here — both in-state tackles — between Cincinnati St. Xavier five-star Paris Johnson (6-7 1/2, 295) and Norwalk three-star Trey Leroux (6-8, 320). Despite visits elsewhere, Johnson has remained committed to the Buckeyes since June 18 while Leroux followed suit March 11 — three days after he visited and added his offer.

Like wide receiver, defensive line is littered with Ohio State recruits from targets to prospects — particularly in 2020. In possession of an offer since Feb. 19, 2018, Cincinnati Princeton four-star defensive end Darrion Henry (6-6, 260) headlines the list after he made his latest visit March 29 and caught up with head coach Ryan Day on the field after the the Buckeyes’ eighth practice of spring camp at the Woody Hayes Athletic Center.

OSU only has one offer out to The Opening Regional Canton’s linebackers — West Lafayette, Ind., 2021 outside linebacker Yanni Karlaftis (6-3, 203), who picked up a scholarship Jan. 14. The position group still brings intrigue, particularly in 2020 with Cincinnati Princeton four-star outside linebacker Jaheim Thomas (6-5, 218) — who remains without an Ohio State offer despite multiple visits to Columbus throughout the past year and a list over the 30-scholarship plateau.

Offer candidates for 2020 include two linebacker prospects to have visited in the past year — Akron (Ohio) East’s Bangally Kamara (6-2, 200) and Baltimore St. Frances Academy’s Nikhai-Hill Green (6-3, 230). Kamara has surpassed the 20-offer mark with his latest March 27 from Nebraska after he made several Columbus visits in the fall, while the three-star Hill-Green — formerly of Pittsburgh North Catholic — has also amassed 20 scholarships since he made his July 31 visit.

A four-star duo from Michigan headlines Ohio State’s defensive back targets in contention at The Opening Regional Canton, with Oak Park athlete Enzo Jennings (6-1, 185) and West Bloomfield safety Makari Paige (6-3, 182) in possession of offers since last May. Beyond the two, Monroeville (Pa.) Gateway safety Derrick Davis (6-0, 176) became one of the Buckeyes’ earliest offers Feb. 19, 2018, when they were the second Big Ten team to extend their scholarship.