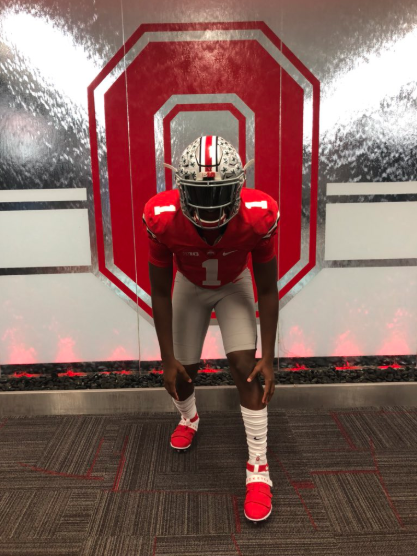 Nikhai Hill-Green already has a handful of offers to his name after he emerged onto recruiting radars throughout the past seven months, including an appearance on Ohio State’s board of targets.

In fact, the four-star outside linebacker from Cranberry Township (Pa.) North Catholic outside of Pittsburgh took an unofficial visit July 31 when the Buckeyes hosted him on his first trip to campus.

Hill-Green, who is the 247Sports composite’s No. 321 overall player as well as the No. 23 outside linebacker and No. 3 prospect in Pennsylvania for the 2020 recruiting class, came in contact with OSU during the spring evaluation period.

On the road for Ohio State after the 2017 season, linebackers coach and area recruiter Bill Davis checked in twice at North Catholic with Trojans head coach Patrick O’Shea and inquired about Hill-Green.

The two times Davis stopped by North Catholic resonated with Hill-Green, who eventually set up his visit with the Buckeyes and evidently enjoyed last Tuesday in Columbus.

“During the school year, Coach Davis came to my school one day but he came on a day when I wasn’t there,” Hill-Green told BSB. “When he came back again, that really let me know that he has interest in me, plus he’s the linebackers coach and that’s my position. So that just showed and when he talked to (O’Shea) at school, he wanted me to come out for a visit. He didn’t ask me to camp or workout, he just wanted me to come up and see the campus.”

Beyond the given elements of an average visit with a tour of OSU’s campus and Ohio Stadium, Hill-Green’s trip kicked up a notch inside the Woody Hayes Athletic Center, where he checked out the practice facilities before donning the scarlet and gray in a photoshoot. Davis then hosted him for an individual film session.

The 6-2, 215-pounder enters his 2018 season with momentum after the trip to Ohio’s capital capped a strong offseason. He currently holds FBS offers from Toledo, Temple and Boston College with room for more.

“The process has been going well,” Hill-Green said. “A lot of schools have shown interest in me and told me that I can play at the next level, but I just wanted to get better and keep getting stronger this summer and keep getting bigger because I’m still growing. I’ve just been focused on the now.”

Hill-Green added that Florida, Notre Dame, Stanford, Vanderbilt and Wake Forest have expressed interest in addition to the Buckeyes. Prior to the OSU visit, he spent his summer at two other Big Ten schools and one Pac-12 program.

As the process plays out ahead of his junior campaign, Hill-Green has yet to solidify trips for the fall. However, he does have a return trip in mind.

“I don’t know where I’m going to go this season, but I’m going to try to get back up to Ohio State for a game maybe,” Hill-Green said. “My main goal is just to help my team win to an undefeated season. That’s my team goal — to go undefeated — but my individual goal is to do my job and do my part to help the team win this year.”