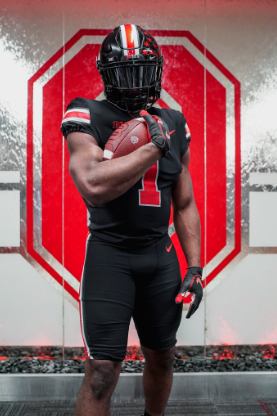 After an 11-day layoff for spring break, Ohio State resumed camp Tuesday with its third practice of March at the Woody Hayes Athletic Center.

As the Buckeyes returned to action in their first of three practices for the week, they hosted a top in-state target on an unofficial visit.

OSU hosted Akron Archbishop Hoban four-star athlete DeaMonte Trayanum, who made his latest trip to Columbus and kicked off what projects as a big recruiting week for head coach Ryan Day and company.

Ohio State’s fourth and fifth practices of spring camp Thursday and Saturday are also expected to bring prospects to campus.

In possession of 14 offers, Trayanum’s scholarships started to roll in Jan. 29, 2018, when the Buckeyes became his first. Before he reached double digits, Notre Dame and Michigan followed in the 24 hours after OSU.

Trayanum made multiple trips to Columbus in the past year as he saw Ohio State recruit him heavily since its initial offer. His next visit comes March 30 at Notre Dame.

The 6-0, 215-pounder starred at running back and outside linebacker for Archbishop Hoban in 2018 after breaking out in 2017.

As a junior, the two-way athlete led the Knights to a 15-0 record and Ohio’s Division II state championship Nov. 29 in a 42-28 win over Massillon Washington.