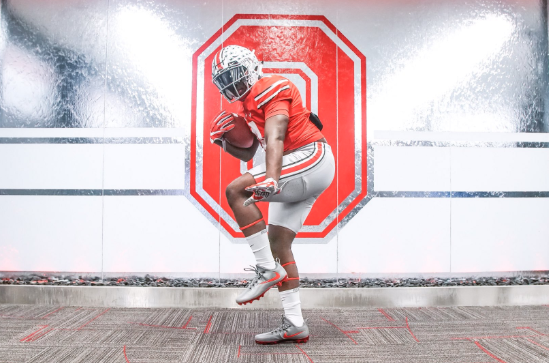 Darvon Hubbard committed July 25 to Ohio State’s 2020 recruiting class as the Buckeyes built early momentum in the cycle, but his recruitment changed Thursday when he dropped from the group.

The 6-0, 200-pounder took to Twitter in the afternoon and announced he would be reopening his process but still considering OSU as a top school going forward.

“Thank you to all the fans and support I have received throughout this process from faily and friends, coaches and all,” a note attached to Hubbard’s tweet read. “Much love to the Ohio State staff for believing in my ability to play the game, and being from Ohio Its (sic) been a dream of mine to play for Coach Urban Meyer. With the changes to the coaching staff I think it is best if I open my recruitment up. I will be De-committing (sic) from The Ohio State University . (sic) This is especially hard for me to say but OSU will still be a top school of mine, but right right I feel it’s best to explore my options. Please respect my decision, and No (sic) media questions please.”

After a cross-country move, Hubbard spent the past two seasons at Scottsdale (Ariz.) Chaparral in 2017 and 2018, where he teamed up with 2020 four-star quarterback Jack Miller and the Firebirds.

Since the offseason, Hubbard reportedly transferred to Surprise (Ariz.) Willow Canyon and will be immediately eligible for the Wildcats in 2019.

Hubbard camped twice with the Buckeyes last June, earning an offer on his second trip back to Columbus when he impressed Meyer and Alford at Friday Night Lights.

“He knows how I operate,” Hubbard said of Alford. “He knows how to talk to me as a person, so I’m able to understand him more than maybe some of my coaches.

Since the commitment, Hubbard stuck with OSU but reportedly planned to take all five official visits.

Georgia, Louisiana State and Tennessee joined Ohio State as the other schools in the Southeastern Conference-heavy mix for his recruitment, he told Bill Greene of 247Sports.

At the time, Hubbard told Greene that he thought the Buckeyes would be “in good hands” with head coach Ryan Day, who took over for Meyer after two years as offensive coordinator/quarterbacks coach.

“I hated seeing Coach Meyer step down, but I knew we would be in good hands with Coach Day,” Hubbard told Greene. “I watched the games when Coach Meyer was suspended, and I thought Coach Day really did a great job. I think he’s a great coach, and I’ve talked to him a few times. Ohio State has told me that everything is good for me, and things are cool with them.

“I definitely want to take all five of my visits, and I might take all of them in the spring, but that hasn’t been decided. I will take one to Ohio State for sure, and then I have a few other schools in mind. Tennessee has been recruiting me really hard, and I definitely want to take one there. LSU has been recruiting me hard as well, so I want to visit there.

“Georgia also wants me to take an official there, and I think they would be a school I’d want to check out also. Those would be three schools right now I’d want to see, along with Ohio State. I do speak with Coach Alford pretty often, and we are cool. I want to visit Ohio State again pretty soon, when I’m back in Akron seeing family.”

Hubbard is the 247Sports composite’s No. 170 overall prospect, No. 15 running back and No. 6 player in Arizona. However, OSU has other top targets at the position in 2020.