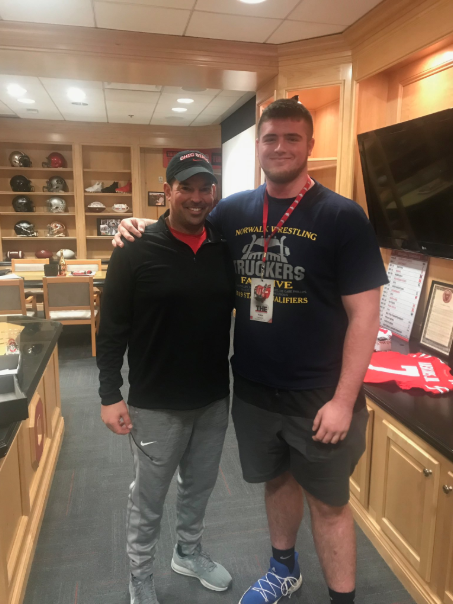 With the start of spring camp, Ohio State also accelerates its recruiting as prospects come to Columbus and check the Buckeyes out.

The process started at OSU’s first practice Wednesday at the Woody Hayes Athletic Center, where head coach Ryan Day‘s staff hosted a handful of players in the classes of 2020 and 2021.

It continued Thursday with a recently offered recruit in the upcoming cycle making his first trip to campus since he earned the scholarship.

Elsewhere on Ohio State’s board for 2020, a recently offered target at a position of need who had been committed elsewhere reopened his recruitment as he eyes a potential visit with the Buckeyes, while another in-state prospect picked up a breakthrough scholarship.

Delving into the details, BSB recaps the recent activity on the trail for OSU as its recruiting starts to heat up again.

In the midst of multiple visits, Barron checked out OSU via area recruiter and special teams coordinator/assistant secondary coach Matt Barnes before he took his subsequent visit Friday at Pittsburgh. Prior to Pittsburgh, Barron made trips to Connecticut and Syracuse last weekend.

From nearby Westerville (Ohio) Central, 2021 quarterback Judah Holtzclaw did the drive Wednesday down Interstate 71 to Columbus and experienced Ohio State’s first practice of spring camp. The 6-5, 195-pounder checked out the Buckeyes in action on behalf of Day and passing game coordinator/quarterbacks coach Michael Yurcich.

Holtzclaw has yet to receive an offer, but his interests are expanding. Over the summer, he camped with several Power Five programs.

After an offer Jan. 31 from Ohio State, Dedham (Mass.) Nobles 2020 three-star Cam Large checked in Thursday to visit the Buckeyes. The 6-5, 240-pounder possesses 26 offers — half of which have come since OSU entered the mix.

Most recently, he added offers from Penn State (Feb. 25) and TCU (Feb. 27). Those followed a trip to Notre Dame the weekend of Feb. 23-24, which resulted in an offer from the Fighting Irish.

Large is the 247Sports composite’s No. 499 overall prospect, No. 12 tight end and No. 5 player in Massachusetts for 2020. He also plays defensive end for his high school team.

Had an amazing visit in Columbus today!! Thank you for having me @OSUCoachKDub @markpantoni #GoBucks ⭕️ pic.twitter.com/QJch3C6koF

Last but not least for Ohio State’s visitors, the Buckeyes’ second practice of spring camp Friday resulted led to an in-state offer for Norwalk’s Trey Leroux. The 6-8, 320-pounder wrapped up the afternoon with a meeting in Day’s office before he and his family toured the Woody Hayes Athletic Center with assistant director of player personnel Weston Zernechel.

The massive offensive tackle has been on OSU’s 2020 recruiting class radar for a while now. Ohio State hosted him Sept. 1 for the 2018 season opener against Oregon State and senior offensive quality control coach Corey Dennis stopped by his school Jan. 11, according to Norwalk head coach Todd Fox.

Leroux has yet to be rated by the 247Sports composite. Elsewhere in his recruitment, he has 12 offers, highlighted by Purdue (Oct. 21) and West Virginia (Dec. 5).

On the topic of recent offers, Sugar Land (Texas) Kempner 2020 four-star offensive guard Akinola Ogunbiyi became uncommitted Wednesday when he reopened his recruitment after nine months. The 6-4, 310-pounder originally committed June 2 to Texas A&M before he added 10 more offers to his list.

Since the Buckeyes offered Feb. 14, Ogunbiyi picked up scholarships from Virginia Tech (Feb. 16) and Ole Miss (Feb. 27) as well. Georgia and Alabama headlined the list of Power Five schools to offer him after the Aggies pledge.