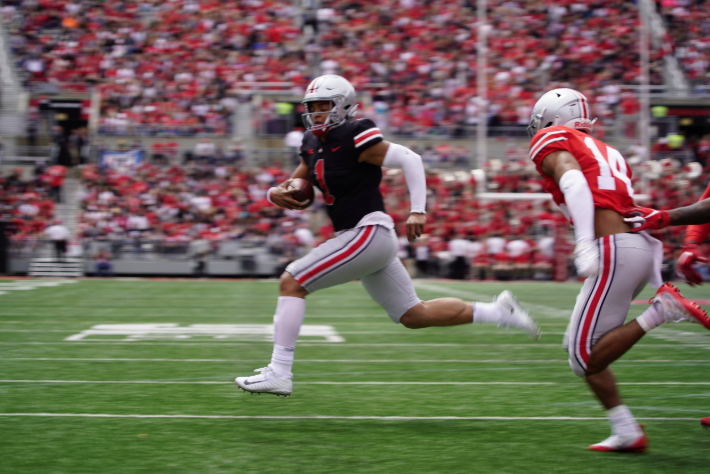 From the revolving door at quarterback between sophomore Justin Fields‘ arrival Jan. 4 out of Georgia and sophomore Tate Martell’s transfer Jan. 16 out to Miami (Fla.), a lot about OSU will look different when its 2019 season opens Aug. 31 against Florida Atlantic.

Fifteen days of spring camp closed Saturday at Ohio Stadium with several top performers headlining the Gray’s 35-17 win over the Scarlet before 61,102 at Ohio Stadium, but the bigger picture delves deeper than just the annual scrimmage.

Tying the spring game together with the previous 14 practices, how is the team taking shape under Day? Between continued production since March 6 and new observations Saturday, Buckeye Sports Bulletin takes a closer look with five things we learned.

1. Garrett Wilson needs to play — a lot — in 2019. Only the third early enrollee since 2012 to have his black stripe removed during spring camp, the freshman wide receiver and 2019 five-star recruit from Austin (Texas) Lake Travis lived up to the hype Saturday when he recorded four receptions for 44 yards for the Scarlet’s second-team offense.

Wilson’s highlight came on in the second quarter when he climbed the ladder against sophomore Sevyn Banks for his 18-yard snag over the 6-1, 200-pound cornerback, snatching a touchdown pass from redshirt freshman quarterback Matthew Baldwin down the right sideline and putting the Scarlet on the board for the 7-7 tie against the Gray.

Throughout spring camp, Wilson (6-0, 188) worked with the first-team offense and has emerged as the projected backup at the “Z” receiver to senior Austin Mack, but he deserves his fair share of snaps when the Horseshoe hosts the Owls and beyond.

2. The dual-threat skill set of Fields is where separation starts between the sophomore transfer from Georgia and Baldwin. While first-year head coach Ryan Day didn’t want to announce a starter as he lets his signal callers duke things out into fall camp — both had ups and downs as passers during the game — Fields ultimately made plays happen on the ground.

The 6-3, 223-pounder took eight carries for 38 yards (4.8 average) with a five-yard keep right past junior safety Isaiah Pryor to put the Gray up 14-7 over the Scarlet in the second quarter. Fields then broke out briefly in the third quarter when he took his longest carry all game for 30 yards deep into opposing territory.

Struggles persisted in the passing game for both arms — Fields completed 4 of 13 passes (30.8 percent) for 131 yards and one touchdown while Baldwin went 20 of 36 (55.6 percent) for 246 yards and two touchdowns to two interceptions — but tucking and running made Fields stand out. While the quarterback competition continues into summer workouts and fall camp, Fields showed a blend of athleticism that Baldwin simply lacks as a pure pocket passer.

Bowen had been between both tackle spots, but the Buckeyes’ first-team unit went with Bowen at left guard while they kept fifth-year senior Joshua Alabi (left) and redshirt freshman Nicholas Petit-Frere (right) at each tackle spot. OSU rounded out its starters with sophomore center Josh Myers and sophomore right guard Wyatt Davis.

The position group welcomes competition in June when Rutgers graduate transfer center/guard Jonah Jackson and Buford, Ga., 2019 five-star center signee Harry Miller — who both attended the spring game as visitors — arrive for summer enrollment. But until then, Bowen brings the unit a versatile and veteran presence at left guard — a much-needed option on a retooling and young line.

4. Zach Harrison is ahead of schedule. No one questioned Harrison’s potential when Ohio State’s five-star defensive end from Lewis Center (Ohio) Olentangy Orange enrolled early in January and got his career started with the Buckeyes during winter workouts, but did he even expect to be so heavily involved with position coach Larry Johnson’s unit by the end of the spring?

Harrison flashed April 5 during OSU’s 12th practice of spring camp when he worked in with the second-team unit and appeared in the “Rushmen” package at three-technique next to sophomore Tyreke Smith along the interior as senior Jonathon Cooper and junior Chase Young manned the edges, and he ended his spring camp strong. The 6-6, 255-pounder worked his way up from the second-team defense when he appeared on a first-team unit with sophomores Taron Vincent, Tommy Togiai and Smith.

Harrison (April 12) followed Wilson (April 8) as just the fourth early enrollee in the past eight years to shed the black stripe before the end of the spring. There were questions about whether or not Harrison would crack Johnson’s deep rotation by the start of the fall, but he appears to be leaving no doubt as his rapid development continues into summer workouts.

5. Redshirt freshman Master Teague complements J.K. Dobbins nicely in Ohio State’s backfield and threatens the standing of junior Demario McCall as the pecking order at running back sorts itself out. With the departures of Mike Weber (NFL draft) and Brian Snead (Iowa Western), Teague made his case for the leftover touches behind Dobbins when he took seven carries for 75 yards (10.7 average) and two touchdowns, while freshman Marcus Crowley — who had 10 carries for 50 yards and one touchdown — manned the second-team offense.

Dobbins is the Buckeyes’ starter, but reps are open for freshman Marcus Crowley, McCall and Teague to take. The 5-11, 220-pound Teague took a step in the right direction during Saturday’s spring game while McCall did not play due to a nagging calf injury that has limited him for the majority of spring camp.

From running backs coach Tony Alford to Day, OSU has publicly acknowledged McCall’s “matchup nightmare” potential in the offense after he spent his sophomore year between positions at H-back and entered the spring with improved versatility as a threat out of the backfield. But can Teague continue his momentum into fall camp as he pushes for Weber’s vacancy?