Buckeye Leaves: Who Stood Out In Ohio State’s Spring Game? 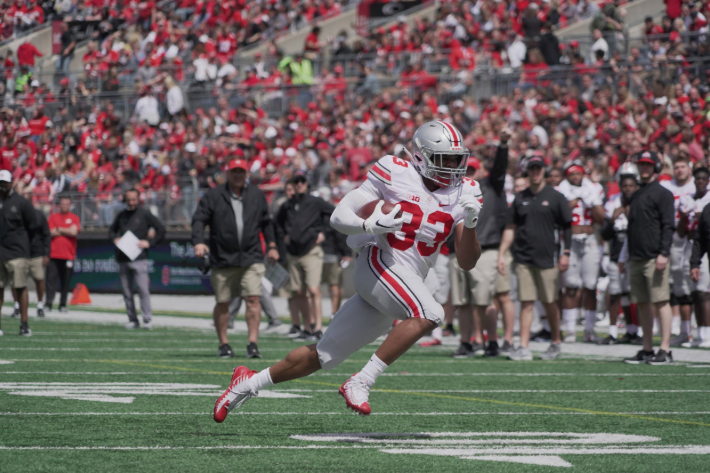 The Buckeyes capped the 15th day of camp with Saturday’s spring game as the Gray recorded a 35-17 win over the Scarlet before 61,102 at Ohio Stadium.

Among the production, BSB sifts through some of the top performers from OSU’s annual scrimmage and hands out its Buckeye Leaves.

Master Teague earned a Buckeye Leaf for his performance in the spring game. The redshirt freshman running back hit the hole hard on each of his carries, showing an impressive burst. The 5-11, 220-pounder ran with a purpose despite the “no tackling” rule.

Teague (5-11, 220) toted the rock five times for 36 yards and one touchdown in the first half, including rushes of 13 and 10 yards, before totaling 75 yards on seven touches — an average of 10.7 per carry — on the afternoon. The Murfreesboro (Tenn.) Blackman product, who was a four-star recruit in the 2018 class, also hauled in one reception on two targets for five yards.

He was also solid in pass protection. His best tote of the day came in the third quarter, a sweep left out of the shotgun, taken 22 yards for a touchdown.

Ohio State redshirt freshman quarterback Matthew Baldwin and early enrollee freshman wide receiver Garrett Wilson hooked up on 98 passes for 1,774 yards and 26 touchdowns while leading Austin (Texas) Lake Travis to the state championship game in 2017, and the two carried that connection over to today’s spring game.

Wilson (6-0, 188) was Baldwin’s first target of the day, and then pulled down an 18-yard touchdown pass over sophomore cornerback Sevyn Banks to tie the game at 7-all early in the second quarter. He had four catches for 44 yards.

The highlights came against the second-team offense, but junior safety Jahsen Wint deserves some recognition for two of his plays he made. Wint snagged a pair of interceptions in the second quarter thanks to identical plays on the ball, cutting to the sideline from midfield and forcing turnovers.

His first came against Baldwin, who looked for sophomore wide receiver Ellijah Gardiner down the right sideline near the red zone but missed slightly. With Banks in coverage, Wint (5-11, 200) crashed in and came down for the pick despite contact through the boundary.

Moments later, before the first half ended, Wint did it again. This time, he stepped in front of fifth-year senior quarterback Chris Chugunov’s throw for redshirt freshman H-back Jaelen Gill down the left sideline with redshirt freshman cornerback Tyreke Johnson in coverage.

Wint’s performance likely makes no difference in where he stands on Ohio State’s defensive depth chart, but his ability to find the ball and make plays is improved as a serviceable backup.