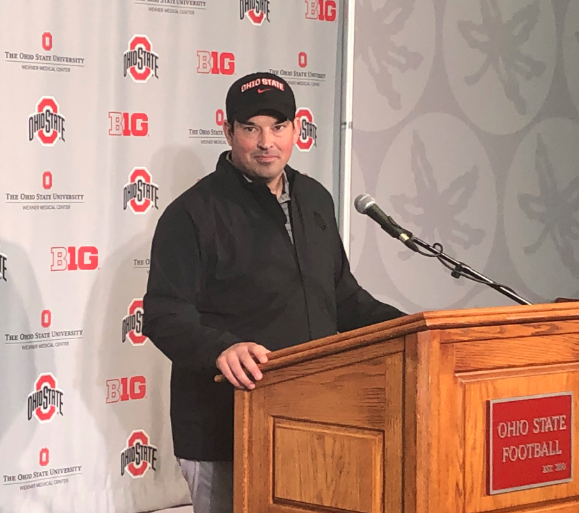 In the two weeks since the April 13 spring game at Ohio Stadium, the position’s picture has shuffled even further. First-year head coach Ryan Day and OSU, however, have reacted on the fly and figured out a best-case scenario in the midst of severely limited options.

In nine days, the Buckeyes went from three quarterbacks — two scholarship arms and a walk-on player — to five with Hoak (scholarship) and Andrade (walk-on) added to the room of signal callers before the 2019 season.

Hoak (6-4, 212) has some experience — his three-year tenure with the Wildcats featured game experience in only the 2018 campaign as a sophomore, making five appearances while completing 13 of 26 passes (50.0 percent) for 167 yards and two touchdowns to an interception.

Andrade (6-3, 205) chose OSU over Fordham, Morehead State and South Alabama scholarship offers — plus a preferred walk-on opportunity from Florida — after completing 299 of 449 passes (51.0 percent) for 4,366 yards and 39 touchdowns with the Bearcats.

The two quarterbacks enter Ohio State’s group in different spots. Hoak arrives with the mentality of competing with Fields (6-3 ,223) for the Buckeyes’ starting job, while Andrade rounds out the depth chart behind Chugunov (6-0, 208) and Vanatsky (6-1, 205).

Despite one appearance — Sept. 8 against Rutgers — in which all he did was hand the ball off at the end of the 52-3 blowout win at the Horseshoe, Chugunov is crucial to the two-deep lineup. The second-year graduate transfer from West Virginia originally joined the 2018 roster with experience as the Mountaineers’ 2017 backup behind starter Will Grier, completing 45 of 95 passes (47.4 percent) for 551 yards and three touchdowns to three interceptions in eight games (two starts).

Beyond the current signal callers, Scottsdale (Ariz.) Chaparral four-star Jack Miller waits in the wings as OSU’s only quarterback committed to the 2020 recruiting class. Ohio State, however, has room for another arm in the next cycle and is pursuing several targets to complement the future depth with Miller (6-4, 210) — the 247Sports composite’s No. 70 overall prospect, No 4 pro-style quarterback and No. 5 player in Arizona.

Vanatsky committed late to the 2018 recruiting class and joined the program last summer for June enrollment, choosing a non-scholarship career in Columbus over a preferred walk-on offer from Marshall and opportunities with NAIA schools such as Georgetown (Ky.) College. As a senior at Cincinnati Hills Christian Academy in 2017, Vanatsky was the Miami (Ohio) Valley Conference Player of the Year after he completed 67 percent of his passes for 72 touchdowns to 14 interceptions.

Day remains involved with the Buckeyes’ quarterbacks, but since he moved to his post of head coach, more responsibilities have been inherited by passing game coordinator/quarterbacks coach Mike Yurcich and senior offensive quality control/assistant quarterbacks coach Corey Dennis.

As offensive coordinator/tight ends coach Kevin Wilson works with Day and others on the staff to tweak the offense accordingly, the dual-threat Fields believes that the 2019 scheme will incorporate more read-option looks than it did while the pocket-passing Haskins operated the 2018 unit.

Fields figures to become the offense’s starter before the season opens Aug. 31 against Florida Atlantic, especially without Baldwin in the picture.

The transfer from Georgia has work to do after he completed 4 of 13 passes (30.8 percent) for 131 yards and a touchdown with the first-team offense in the spring game, but his ability as a runner was evident on eight carries for 38 yards (4.75 average) and a long of 30.

With the Bulldogs in 2018, Fields played situationally behind incumbent starter Jake Fromm, completing 27 of 39 passes (69.2 percent) for 328 yards and four touchdowns while adding 42 rushes for 266 yards (6.2 average) across 12 games.

Regardless of how the pecking order shakes out through fall camp, considering where the quarterbacks were just over a week ago, Day has to feel a lot better about where he has his room right now.