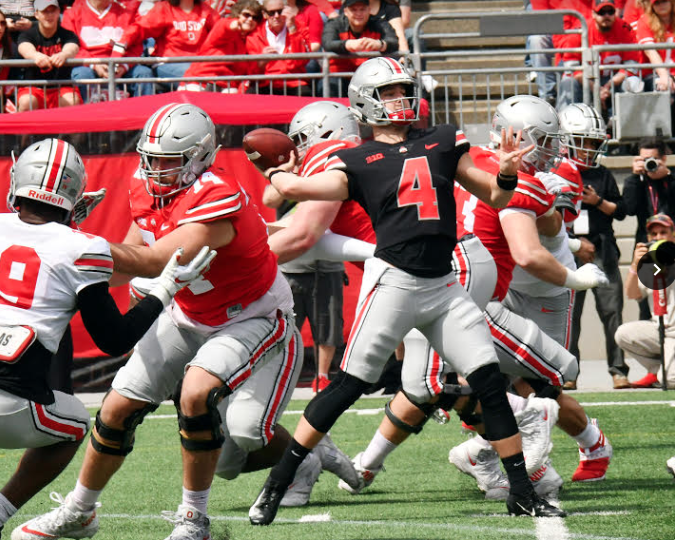 Before the Buckeyes began the 2018 season, they needed to fill out their quarterback depth with one more scholarship arm.

While the offense was fine with Dwayne Haskins in line to lead Ohio State, things were shaky after the sophomore starter as only redshirt freshman Tate Martell and freshman Matthew Baldwin rounded out the talented but inexperienced room.

Then the second-year offensive coordinator/quarterbacks coach, Ryan Day worked the graduate-transfer market late in the cycle last August when he landed Chris Chugunov as OSU’s two-year option from West Virginia.

“I came here for a lot of reasons, both on the field and off the field,” Chugunov said March 8 after Ohio State’s second practice of spring camp at the Woody Hayes Athletic Center. “I’m working on my master’s (degree in sports management) right now while getting to play. And also, me and Coach Day have a really good relationship.

The Buckeyes are through 15 days of spring without Haskins (NFL draft) and Martell (Miami transfer), but camp concluded April 13 at Ohio Stadium in Columbus with more uncertainty.

Ohio State’s depth took an enormous hit as the former four-star recruit from Austin (Texas) Lake Travis decided to take his talents elsewhere, and he leaves just Chugunov and sophomore walk-on Danny Vanatsky behind Fields among the three arms ahead of the 2019 campaign.

“Just being older and having that experience, I’m sure there’s some responsibility that falls on me a little bit,” Chugunov said. “But I don’t really think about it too much. I just kind of walk out here and do my thing every day, and the same thing in the meeting rooms as well.”

The 6-0, 208-pounder from Skillman (N.J.) Montgomery took a long road to joining the Mountaineers and eventually becoming a Buckeye.

As a three-star recruit in the 2015 class, he committed to former WVU head coach Dana Holgorsen (2011-18) and fit the air raid offense with his quick release and passing comfort out of the shotgun.

After a 2018 season as OSU’s fourth scholarship arm — Day’s personal preference — Chugunov ran the second-team offense behind Baldwin and Fields, competing with every snap and knowing his place in the pecking order.

“Just being here and playing at this level, you have to compete every day, right? But that’s not something I think about often,” he said. “Honestly, when they call my name and say, ‘Hey, Chugs, hop in, take some reps,’ I’m like, ‘All right, let’s play ball.'”

While his only appearance came Sept. 8 during Ohio State’s 52-3 rout of Rutgers, Chugunov has much-needed experience from when he backed up Will Grier at West Virginia in 2017.

Until the Buckeyes sift through the options at quarterback and find another addition before the 2019 campaign arrives Aug. 31 against Florida Atlantic, they heavily rely on Chugunov as their immediate backup behind Fields.

“I’ve sat down with Coach Day multiple times, and we’ve talked about the position I’m in and the value it has for the team and the role I play,” Chugunov said. “So I’ve embraced it, and I just come out here to work every day and like I said.

“I’m here. I have experience. I’m going to compete every day and also excel off the field and set myself up for when football’s over while I’m here. I just do whatever they ask me to do.”