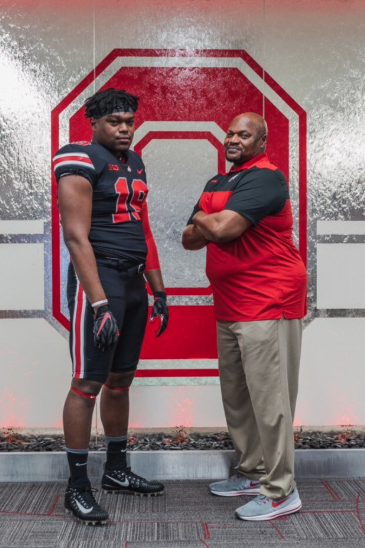 One of Ohio State’s top targets for the 2020 recruiting cycle is one step closer to making his decision.

With nearly 30 offers in tow, Darrion Henry has a wide range of options for college football, but on Sunday, he trimmed the list down to six.

The four-star defensive end from Cincinnati Princeton announced his handful of top choices, including Ohio State in the cut.

The Buckeyes joined Cincinnati, Georgia, Kentucky, LSU and Tennessee among the five others.

OSU has been in pursuit of Henry for the more than a year now, offering him as a sophomore last February. The 6-6, 260-pounder has been back and forth up Interstate 70 to Columbus on multiple occasions since then. Most recently, he made his return trips while Ohio State conducted its first spring camp under head coach Ryan Day.

After he and high school teammate Jaheim Thomas (6-5, 218) — a 2020 four-star outside linebacker whom the Buckeyes offered to end last month — visited for junior day Feb. 2, Henry took in OSU’s eighth practice of spring camp March 29 with his family.

Henry and Johnson returned April 13 for Ohio State’s spring game, prioritized by Day and Buckeyes staffers among the abundance of visitors on hand at Ohio Stadium.

OSU’s 2020 class currently boasts eight commitments, with the latest coming April 12 when Bradenton (Fla.) IMG Academy four-star defensive back Lejond Cavazos (6-1, 185) recommitted, but has yet to secure a defensive lineman.