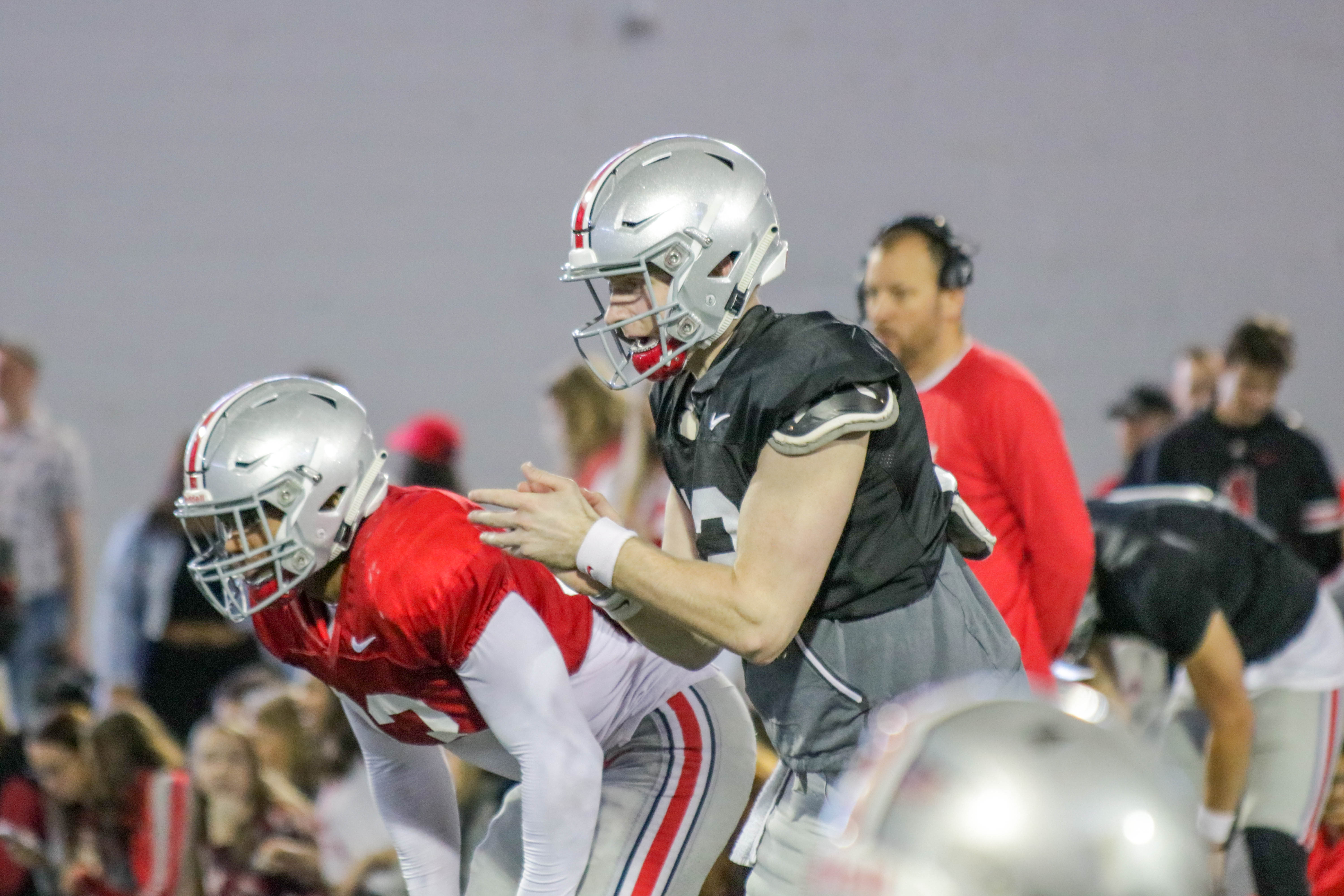 After a report surfaced Thursday from Lettermen Row regarding Matthew Baldwin’s intent to transfer out of Ohio State, the redshirt freshman quarterback confirmed his departure with a parting note on Twitter.

“I want to start by saying I am grateful for my time in Columbus and the relationships formed here at Ohio State,” he said.

The 6-3, 215-pounder placed his name in the NCAA transfer portal five days after he wrapped spring camp with last Saturday’s spring game at Ohio Stadium.

Baldwin completed 20 of 36 passes (55.6 percent) for 246 yards and two touchdowns to two interceptions with the first- and second-team offenses in the Gray’s 35-17 win over the Scarlet before 61,102 at the Horseshoe.

While head coach Ryan Day kept the quarterback competition open into fall camp, sophomore Justin Fields — who transferred Jan. 4 from Georgia — manned only the first-team unit and offered a dual-threat presence with 4-of-13 passing (30.8 percent) for 131 yards and a touchdown, plus eight rushes for 38 yards (4.8 average).

“This spring was huge for me to finally get back on the field after my ACL tear,” said Baldwin, who had to work back from the tear he suffered in his right knee before early enrollment last January. “It felt really great being in the mix of things and taking snaps again. Being able to play in front of 75,000 of the greatest fans in the country was beyond exciting. I loved getting to know Justin and competing with him was an incredible experience for me. I was really proud of what I did and am excited about my progress.

“At the same time, spring was a tough time for me personally. My family and I have prayed and talked a lot about where I belong and what is best for me. In the end, we feel like it’d be better for me to step away from Ohio State. I want everyone to know this isn’t done out of anger or frustration, but I’m not just a football player.

“I want to emphasize the love and respect I have for the entire Ohio State coaching staff and my incredible teammates. Especially, I want to thank Coach Day for his guidance over the past year and for the belief he had in me from the start. He is an amazing coach and a great person. He will do incredible things at Ohio State. I also want to thank the strength coaches who work with us every day.

“Finally, I want to thank (physical therapist) Adam Stewart and the entire physical therapy and training staff for helping me bounce back. Stew is the best in the business and has been such an important person in my life this year. I will never forget what he did for me in what was a very difficult time.”

The former four-star recruit from Austin (Texas) Lake Travis is expected to transfer closer to home.

Baldwin originally came to Columbus as the hand-picked quarterback in the Buckeyes’ 2018 class by Day, then a first-year co-offensive coordinator/quarterbacks coach on former head coach Urban Meyer’s 2017 staff.

His decision to transfer leaves OSU with Fields (6-3, 223) and fifth-year senior Chris Chugunov (6-0, 208) as its only two scholarship quarterbacks — Day’s preference is four — with just sophomore walk-on Danny Vanatsky (6-1, 205) as the third signal caller on the 2019 roster.

“Thank you Buckeye Nation for all the memories and support. I appreciate what this experience has taught me and consider my time here as a blessing,” Baldwin said. “I’m looking forward to my next step in life and I wish the best for each of you.”