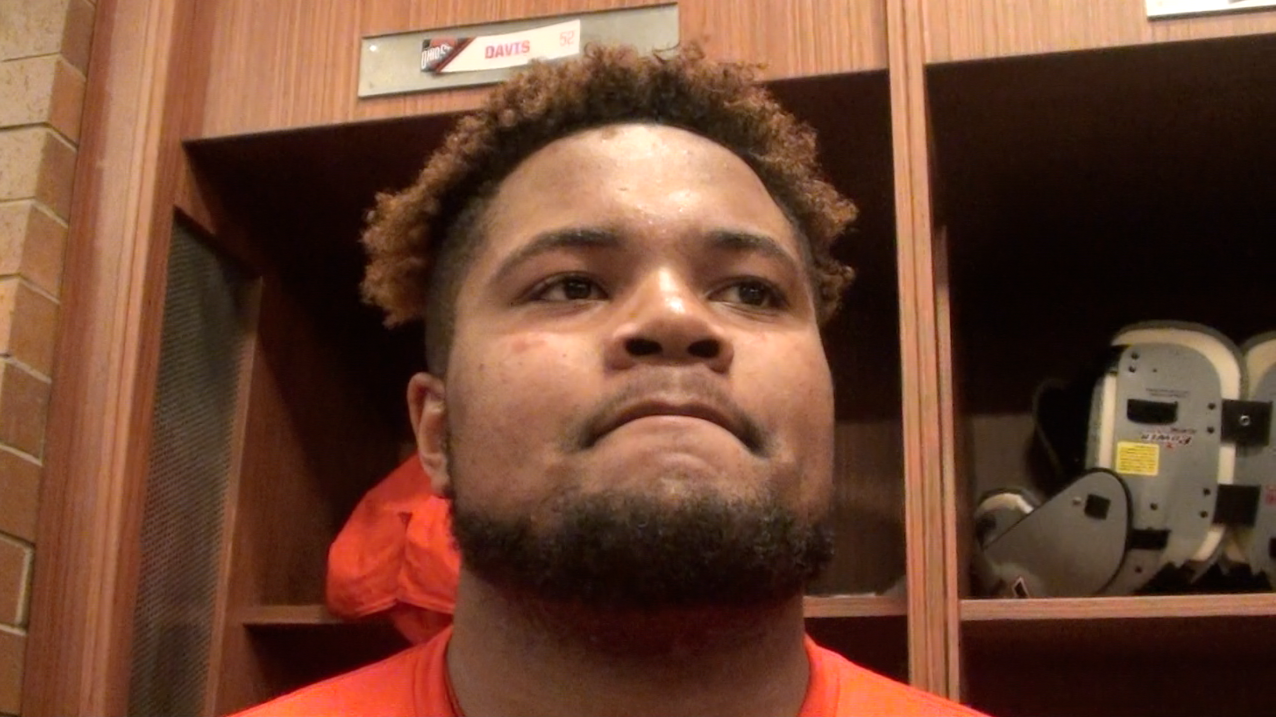 When the Ohio State offensive line lost fifth-year senior and two-year starter Demetrius Knox in the Buckeyes’ 62-39 rout of Michigan Nov. 24, Wyatt Davis embraced the next-man-up approach as he ended his redshirt-freshman season strong in 2018.

Davis made seven appearances, featured across October and November as an extra blocker in jumbo sets for red-zone situations near the goal line, giving OSU’s a much-needed boost up front before he made his transition to starter down the stretch.

“Mentally, I’ve just always got to be ready,” Davis said in December. “At this point, I was traveling (with the team) — so you never know when something’s going to go down the way it does. I just try not to focus on that. I just try to focus on the positives and just getting better each week, doing whatever I can to help the team is.”

Davis showed signs of his five-star status from the Buckeyes’ 2017 recruiting class when he was the 247Sports composite’s No. 24 overall prospect, No. 1 offensive guard and No. 5 player in California.

The Bellflower (Calif.) St. John Bosco product came to OSU for summer enrollment in June 2017 and redshirted his first fall after he underwent an offseason physical transformation.

Davis ended his senior campaign at 345 pounds, entering Ohio State down to 319 pounds before he spent the 2018 season around 310 pounds and adjusted accordingly on the field.

“Just even practice alone, the tempo of practice and being that heavy. Yeah, you’re going to come out for the first couple of plays and do well, but can you do that the entire practice? And once I understood that, that conditioning was very important, I just got committed with our nutritionist and told me (how) to eat and felt better.”

Davis said he “started clicking” in his development on the offensive line’s interior when the Buckeyes began August training camp.

Throughout the fall, though, Davis stayed ready as Ohio State’s next lineman in — junior Branden Bowen battled back from an injury setback — before he eventually emerged Nov. 3 as an extra blocker and tight end en route to 1 of 3 rushing touchdowns as the Buckeyes held off Nebraska 36-31.

“Most definitely, (the tight end jumbo package helped), because that meant I was doing something right at practice,” Davis said. “That was pretty interesting. That was my first time lining up at tight end. I wish I could’ve gotten a little out route, little pass, you know what I’m saying? But no, it was definitely a fun experience.

“Even that alone, just being in that type of environment, even being in a tight end position — yeah, it definitely helped. But I wasn’t down at all this year. I just look at each week of practice — every day, I would go out to practice and I would just try to focus on getting better because you never know when your opportunity is.”

As the offensive line reshuffles once more for the upcoming campaign, Davis brings critical experience to the trenches before OSU begins spring camp March 4.

Ohio State graduated Knox, Pridgeon and senior right tackle Isaiah Prince while Jordan declared for the NFL draft, leaving the sophomore Davis and junior left tackle Thayer Munford (6-6, 319) as the only returning players with starting experience from the past campaign.

The Buckeyes welcome freshman Ryan Jacoby (6-5, 270) as an early enrollee for spring camp and bring further depth in the summer when interior linemen like Buford, Ga., five-star Harry Miller (6-4, 310) and Kahuku, Hawaii, four-star Enokk Vimahi (6-4, 270) enter the mix from OSU’s 2019 recruiting class while Davis becomes the elder statesman among the guards.

“They’ve helped me a lot,” Davis said of Knox and Bowen. “And what to expect, they told me that, coming out for your first game, you’ll be (excited). Heart’s going to feel like it’s pumping 1,000 times. It didn’t because I knew what to expect. I was confident with the guys I was out there with. The fact that they had confidence in me to step up and do the job — I felt like I just had to go out and play.”