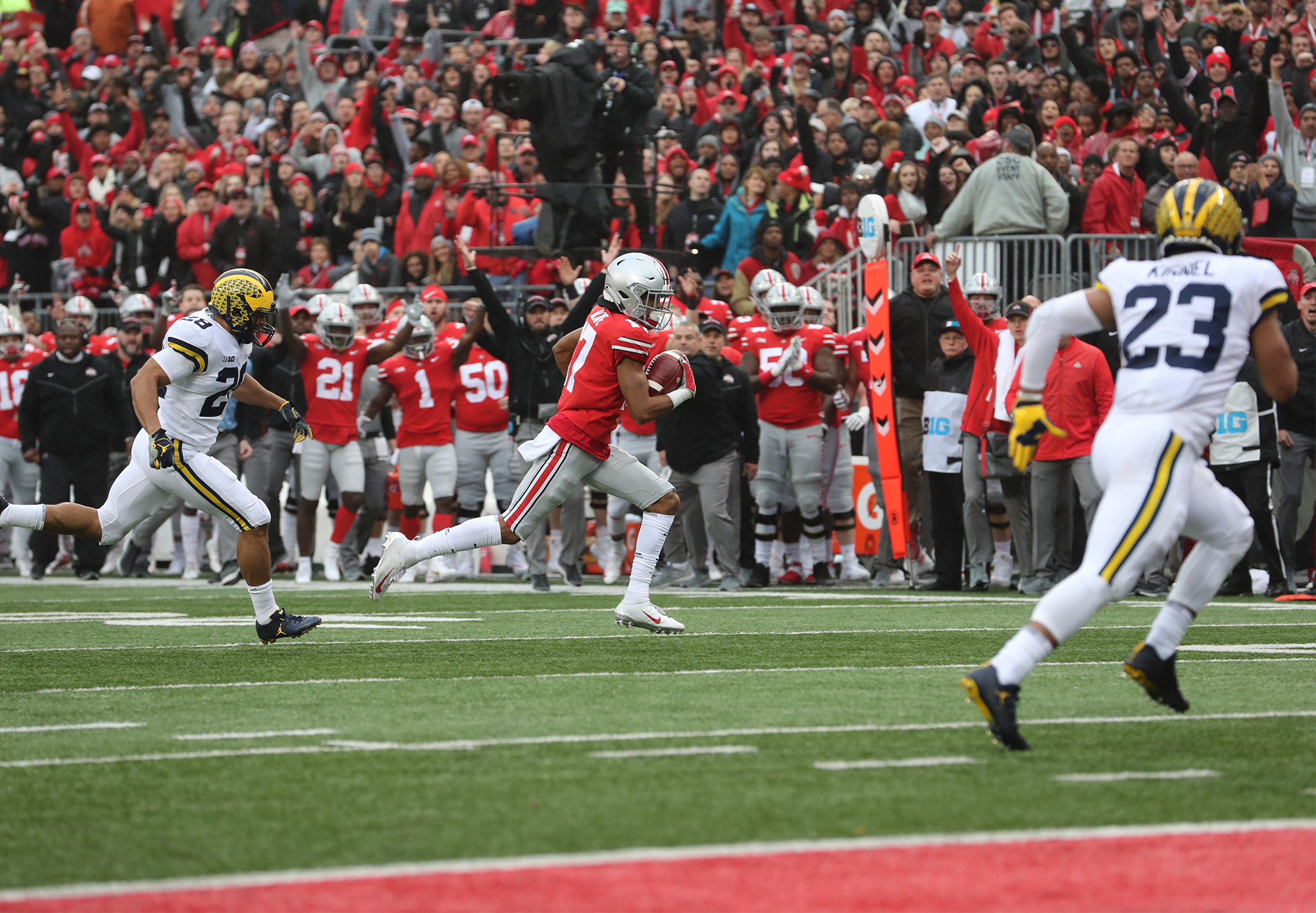 Dwayne Haskins threw six touchdown passes and freshman Chris Olave had a critical punt block in the third quarter to lead No. 10 Ohio State to a 62-39 victory over No. 4 Michigan on Saturday at Ohio Stadium for a seventh straight win in the series.

Olave’s block was returned by freshman Sevyn Banks for a 33-yard touchdown to make it 41-19 in the third quarter. After a Michigan (10-2, 8-1) TD, fifth-year senior Parris Campbell immediately took a pop pass from Haskins and raced 78 yards for a 48-25 margin before a roaring throng of 106,588.

Michigan coach Jim Harbaugh is 0-4 vs. OSU while Urban Meyer is 7-0 vs. the Wolverines.

Campbell had six catches for  192 yards and two touchdown catches.

Junior Mike Weber, a Michigan native, rushed for 96 yards and  a TD on 13 carries.

Michigan quarterback Shea Patterson was 20 for 34 for 187 yards, three TDs and an interception.

Nico Collins had four catches for 91 yards and two TDs for U-M and Karan Higdon, who sort of guaranteed a victory, had 72 yards on 15 carries.

The game was full of penalties and momentum shifts.

Ohio State threatened to blow the game open on the third Haskins’ TD, 31-yards to Johnnie Dixon, for a 21-6 lead with 3:18 left in the first half.

But Michigan stunned the Buckeyes with two TDs in six seconds with under a minute to go and trailed 24-19 at the half after a Blake Haubeil 19-yard field goal on the last play of the half made it 24-19.

The Buckeyes forced a three-and-out to start the game and senior K.J. Hill returned the 55-yard punt by Will Hart 23 yards to the OSU 43. Haskins ran for nine and Dobbins two for the first down.

Haskins found Olave on a crossing route and he scored from 24 yards at the 11:29 mark for his first career TD on drive that took six plays and went 57 yards in 1:57.

Michigan made it 7-3 with 6:22 left in the first on a 39-yard field goal by Jake Moody. The Wolverines made it 7-6 at 14:51 of the second quarter on another long drive that was aided by pass interference on junior cornerback Damon Arnette. On third-and-six from the 13, sophomore linebacker Pete Werner made a TD-saving break-up on a pass to Zach Gentry. Moody kicked a 31-yard field goal. The drive was 12 plays, 52 yards using 5:12.

Haskins and Olave did a command performance with a second 24-yard TD with 9:08 left in the first half to put Ohio State ahead 14-6. The nine-play, 80-yard drive that took 2:59 got a jump when sophomore tight end Luke Farrell gained five yards on third down to keep possession at the OSU 34.

Big plays also included a 12-yard catch by senior Terry McLaurin and 27-yard catch-and-run by Hill to the Michigan 28. and Weber rushed for four before Olave ran down the right sideline then cut in at the goal line to make the catch.

Haskins threw his third touchdown pass of the first half for a 21-6 lead with 3:18 to go when the Wolverines blew coverage and Dixon was open by 15 yards.

At the start of the drive, the Buckeyes faced dire straits when head coach Urban Meyer was called for an unsportsmanlike conduct when he protested a non-call on a high hit to Haskins.

On the next play, facing third-and-17 from their own 14, the Buckeyes got a break when Michigan was called for pass interference, setting up a first down at the 29.

The game was all Ohio State’s before the stunning turnaround.  Once again an Arnette pass interference on third-and-9 from the U-M 47 moved the chains to the OSU 38.  Patterson scrambled 15 yards to the 23 before the deep ball to Collins made it 21-13 with 47 seconds left.

On the kickoff, McCall signaled for the fair catch at the goal line but fumbled and Nate Schoenle recovered for the Wolverines at the 9. On the first play, Evans had a nine-yard TD grab with 41 seconds left. The two-point try failed when junior defensive end Jonathan Cooper tackled Patterson in the backfield.

OSU got the ball back at the 25 and the Wolverines committed three penalties for 30 yards (holding, pass interference and illegal substitution). Haskins found McCall for 33 yards to the U-M 3 with 15 seconds left.

Weber had a one-yard catch and backup freshman QB Tate Martell entered and gained a yard to the 1. Haskins returned and threw incomplete to Victor at the pylon, prompting a 19-yard field goal by Haubeil as time expired for the 24-19 lead.

Ohio State’s second series of the third quarter started at its 42. Dobbins had four carries for 22 yards before Campbell caught a Haskins’ throw at the 32 and ran to the 5 for a 31-yard gain.

Martell came in again and got the same result atthe end of the second quarter. He rushed for zero, Dobbins got three, then no gain and Haubeil kicked a 19-yard field goal with 8:25 left in the third.

The Wolverines committed as kickoff miscue of their own and started at its 8. The took a 34-19 lead with 4:41 to go in the third when Olave burst through the middle and blocked the punt. Banks picked it out of midair at the 33 and ran it in.

Michigan turned it over again on its next series when Patterson was intercepted by junior safety Jordan Fuller at the U-M 26 and returned to the 22. Hill’s reception took it to the 2 and Weber, off a pitch by Haskins, made it 41-26 with 3:10 left in the third.

Michigan made it 41-25 with 14:11 left in the game, going 75 yards in 3:59 and eight plays. A pass interference again aided the drive that ended with Patterson’s 12-yard TD to Collins. The two-point try failed.

Campbell on the first play from scrimmage took the short touch pass from Haskins and burst around the right end to go untouched. (Note: The play was originally ruled a run and not changed to a pass until the following morning).

Michigan responded with an 86-yard drive that consumed 11 plays and 4:13 to pull to within 48-32 as Ben Mason ran for the score from there.