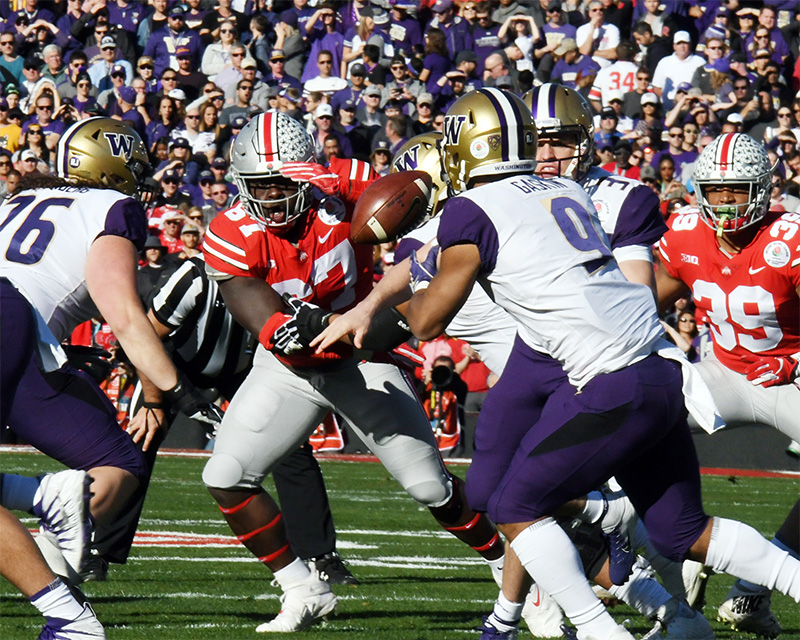 PASADENA, Calif. — With less than a half to play, the 105th Rose Bowl was well in hand for the team wearing scarlet and gray.

At least, that’s what it looked like on New Year’s Day in Pasadena, Calif.

No. 6 Ohio State scored on a 3-yard run from sophomore back J.K. Dobbins with 8:23 to play in the third quarter, putting the Buckeyes ahead of No. 9 Washington, 28-3. The Huskies had hardly moved the ball, and Ohio State was scoring with relative ease.

Those turned out to be the Buckeyes’ final points of Urban Meyer’s tenure as head coach, though, but Ohio State (13-1) was still able to hold on for a 28-23 victory over Washington (10-4).

The Huskies struck back with 12:17 to play when running back Myles Gaskin threw a jump pass to Drew Sample to make it 28-10. Less than six minutes later, Gaskin punched the ball in himself from a yard out, and he scored again with less than a minute to play to make it a one-possession game for the first time since Ohio State went ahead 14-3 early in the second quarter.

“At halftime, we just said take it one drive at a time,” Washington quarterback Jake Browning said after the game. “And I think coming out in the second half, Myles definitely sparked it. And fourth quarter we were able to move the ball up and down the field pretty well, and we were just a little too little too late.

“But we’re always going to keep swinging, we always did keep swinging, and I think that’s kind of how we are as a team. We’re never out of it. Just keep battling.”

Washington’s final chance came down to an onside kick. Ohio State called a timeout just before the first attempt, and the second was recovered by fifth-year senior wide receiver Johnnie Dixon, allowing the Buckeyes to kneel out the remainder of the clock.

Wins are nothing new for Meyer at Ohio State (or at any of his four head coaching stops). The 54-year-old has been a head coach for 17 seasons, spending two years each at Bowling Green and Utah before six at Florida and seven at Ohio State – that’s all part of an overall coaching career that spanned 33 years.

The Rose Bowl marked the end to all of that – assuming things go as planned – sending Meyer out with an 83-9 record at Ohio State and a 187-32 record overall.

Of all those 187 wins, though, the last one was a little bit different.

“I would have been on the phone recruiting the last half of the walk off the field if it wasn’t our last game,” Meyer quipped in the postgame press conference. “And right now I’d be starting to put pencils to who is coming back, who is not coming back, and what do we do at left tackle, what do we do this, what do we do that. But the new guy’s got to worry about that, and we’re certainly going to help him. So it felt different.”

While Meyer has said on numerous occasions that he doesn’t expect to coach again – in fact he’s expected to serve an assistant athletic director at Ohio State after his retirement – plenty of speculation has continued. For her part, Meyer’s wife, Shelly, told ESPN that she has a firm opinion on that front.

“I would be ecstatic if he didn’t (coach again),” Shelley Meyer said. “I’m done. I want him to be done. He’s too intense.”

Parris Campbell was targeted early, and he was targeted often. That could describe the entire season for Ohio State’s fifth-year senior starting H-back, or it could refer to the Rose Bowl alone.

Campbell, an Akron St. Vincent-St. Mary product, reeled in 11 receptions on New Year’s Day as the Buckeyes topped Washington. That total gave Campbell 90 receptions for the season – the most ever for an Ohio State player in a single year. The previous record of 85 was set by David Boston in 1998, but Campbell had already surpassed that mark with seven receptions before halftime.

With three touchdown passes in the first half, Ohio State sophomore quarterback Dwayne Haskins became the sixth player in NCAA Division I history to throw 50 scoring strikes in a single season.

Overall in the Rose Bowl, Haskins completed 25 of 37 passes for 251 yards and those three early scores, but struggled for much of the second half as Ohio State scored just seven points after the break. He improved to 13-1 as a starter, though, in what will likely be his last appearance for the Buckeyes before heading off to the NFL, although he said after the game he hadn’t yet made a final decision.

“I still have a lot of time making the decision, working with my family and my teammates and coaches to figure out what’s best for me,” Haskins said. “But right now I’m excited to get this win. Excited to leave Coach (Meyer) with this victory for myself and the rest of the teammates. It’s a blessed situation right now.”

Haskins was named the offensive player of the game for his performance, while sophomore safety Brendon White earned the top defensive honors in the 105th Rose Bowl.

White finished the game second among Ohio State player with eight tackles (all solo), including two tackles for loss, to go with a pass breakup. He also had an interception on Washington’s fourth-quarter two-point conversion attempt that, if the Huskies had converted, would have made it a three-point game before the they attempted to kick onside.