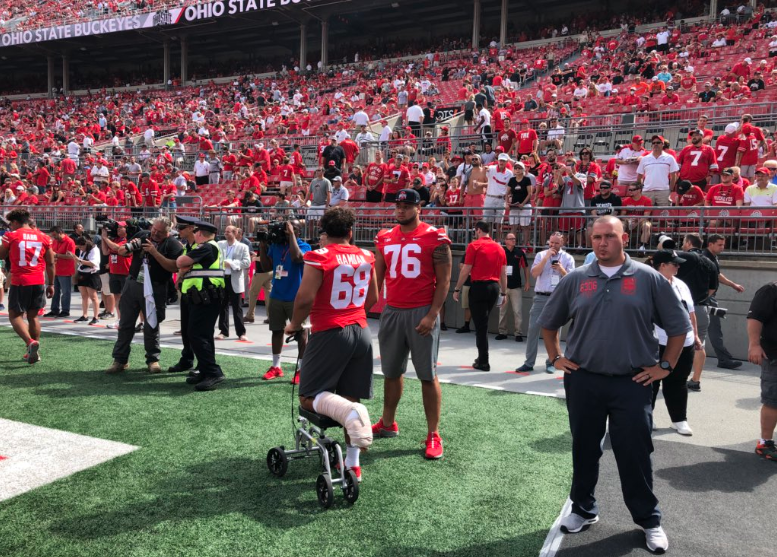 The 6-7, 312-pounder posted a picture to his Instagram story and stated that he hopes “third surgery’s a charm” with its location tagged to The Ohio State University Wexner Medical Center.

A team spokesperson confirmed Bowen’s surgery to BSB, but there was no update on the length of the offensive lineman’s recovery timeline.

In the afternoon, however, Bowen published a post on Instagram and explained why he had surgery on his leg for the third time.

“I found out a couple weeks ago that my fibula hadn’t fully healed, and was not connected (known as a non-union), and would most likely never fully heal on its own,” a part of Bowen’s post read. “I tried to play through this for a while, but the pain became too much as it was affecting how I was playing, from running, to simply taking my steps as an offensive lineman.”

Over the past 11 months, Bowen gradually worked his way back as he participated in Ohio State’s spring and fall camps.

Ohio State opened its season Sept. 1 with a 77-31 victory against Oregon State, but Bowen did not dress as fifth-year senior Demetrius Knox started at right guard.

Before the game, acting head coach Ryan Day acknowledged Bowen’s setback but did not have an update when asked about the offensive lineman’s return.

“(Bowen) has been dealing with that leg injury and coming back from it has been a little bit slower than he’s liked,” Day said Aug. 27. “But he’s still working through that now. But he has missed some time and so I know he’s been frustrated with that, but it’s a long road to recovery with the injury that he had.”

According to Branden Bowen's Instagram story, Ohio State's junior offensive lineman is undergoing another surgery. It's been a tough road to recovery for Bowen, the Buckeyes' starting right guard last season, since he broke his leg Oct. 7 against Maryland. https://t.co/LLSIaZnFoZ pic.twitter.com/Y1KIwTBlBi