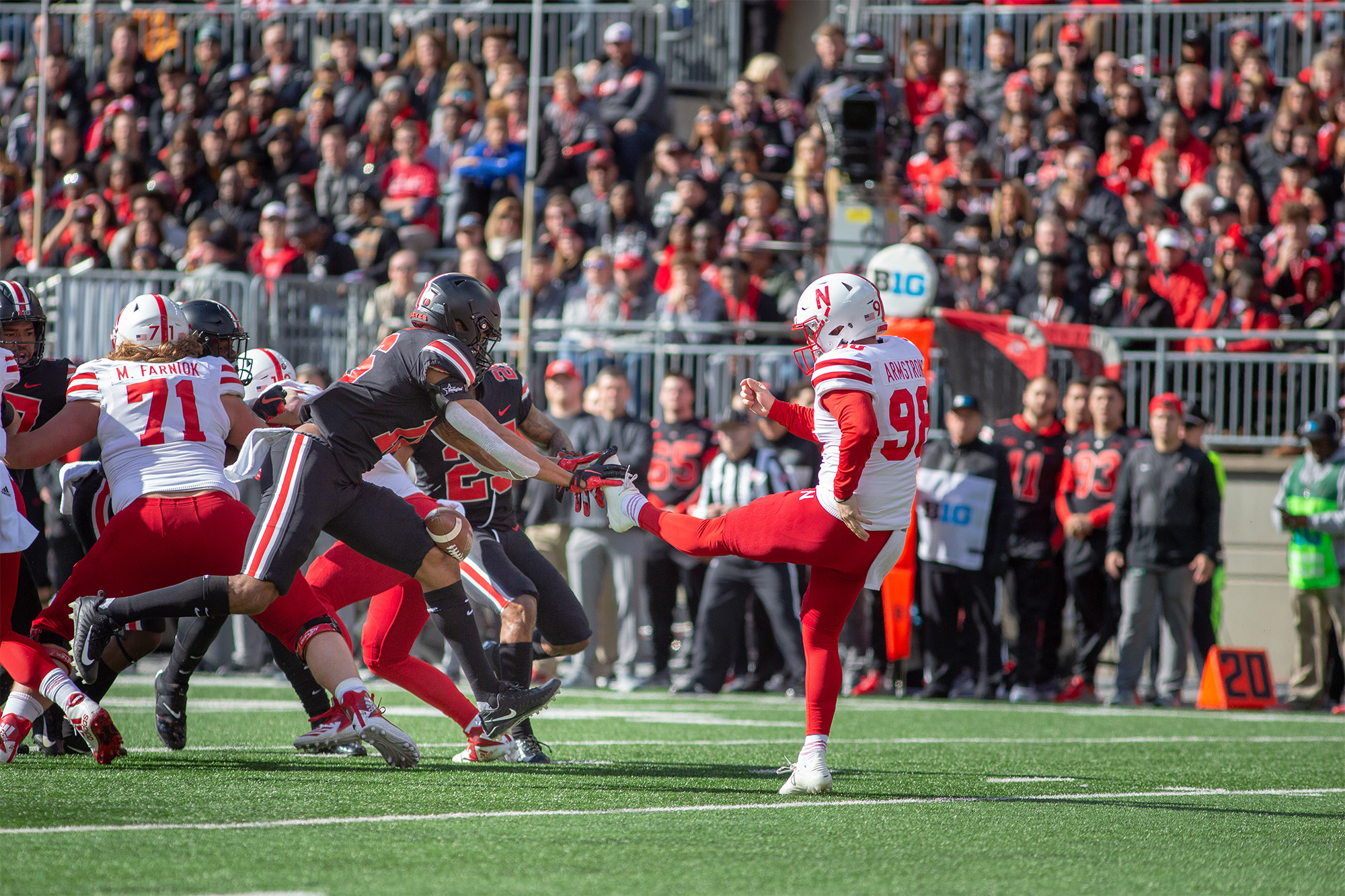 Ohio State was not sharp coming its open date, but the Buckeyes were good enough to rally in the second half for a 36-31 victory over Nebraska at sunny Ohio Stadium on Saturday.

After a Nebraska field goal, Dobbins ran 42 yards for his third TD and a 36-24 lead after the two-point conversion failed.

Dobbins had 163 yards on 23 carries and Mike Weber added 91on nine runs.

Haskins was 18 for 32 for 252 yards, two touchdowns and an interception.

Devine Ozigbo had 20 carries for 86 yards and a TD and Stanley Morgan Jr. had seven catches for 87 yards.

Nebraska took the opening touchback and rammed the ball down OSU’s throat to the tune of a 12-play, 75-yard, 5:04 drive to take the 7-0 lead.

Martinez was 3 for 3 for 25 yards and had six carries for another 46 before Devine Ozigbo scored from the 1 on a second-and-goal with 9:56 left in the first quarter. Martinez had a 13-yard pass to Stanley Morgan Jr. and a 7-yard completion to Jack Stoll on a fourth-and-2 from the OSU 45 to keep the drive alive and an offside penalty gave the Cornhuskers another first down at the Buckeye 11.

The ensuing kickoff was interesting. Whether Caleb Lightbourn attempted an onside kick is debatable, but he nearly missed the ball and it squibbed ahead 1 yard.  With an additional offside call, the Buckeye started at the Nebraska 31 but did nothing with the miscue.

Dobbins ran for 5 and 4 yards but a run by H back Parris Campbell resulted in a 1-yard loss and Weber gained only a yard on the next play and boos emanated from the crowd as the Buckeyes were stopped on downs at the 22.

The cheers returned when junior linebacker Keandre Jones went unscathed to block a punt from the Nebraska 22. The ball went out of the end zone for a safety at the 7:10 mark of the first quarter to make it 7-2.

To compound matters, the Buckeyes took the kickoff/punt and drove 68 yards in six plays, consuming 1:52 to take a 9-7 lead on Johnnie Dixon’s 42-yard TD reception with 5:11 left. The series was helped along by 12-yard catch Demario McCall.

The Buckeyes padded the lead after Nebraska’s three-and-out with a possession that started ominously at the OSU 43 due to an offensive pass interference call on Binjimen Victor. But a pass interference on Nebraska two plays later got the Buckeyes out of trouble at their 48 and Haskins passed 13 yards to Campbell and had a 9-yard flip to Luke Farrell to the 26.

Dobbins then followed with a rush of 16 to the 10 and went over left guard for the final yardage on the ensuing play to make it 16-7 with 1:51 left in the first quarter.

The second quarter didn’t have as much scoring but there were moments. Nebraska drove the OSU 10 early before Martinez scrambled and made an ill-advised backward pass that junior defensive end Jonathan Cooper recovered for OSU at the 26.

On the Huskers’ next possession Ohio State junior safety Jordan Fuller was ejected for targeting. Because it occurred in the first half, he will be eligible to play the next game at Michigan State.

The next time OSU got the ball Haskins was sacked and fumbled it away at the Nebraska 36. It was costly turnover because Martinez took the Huskers 64 yards in 10 plays over 4:00 to pull them to within 16-14 on his 2-yard run with 4:52 to go before the band played.

Martinez had completions to Morgan for 11, Spielman 14 and Mike Williams 15 along the way.

Another Ohio State put the Cornhuskers in position to take the lead when K.J. Hill fumbled at the OSU 47 after a 30-yard grab.

The Buckeyes were powerless to keep them off the board as Nebraska took a 21-16 lead with 15 seconds left in the half. The Huskers covered the 47 yards in eight plays (all runs), using 3:54.

Ozigbo had 27 of them on ground and Martinez capped the drive with a 2-yard keeper.

OSU’s first series in the second half went to the Nebraska 18 but Haskins was intercepted in the end zone by Lamar Jackson.

The Buckeyes regained the lead with 5:39 left in the third quarter thanks to Dobbins’ 3-yard carry. Prior to that, Weber had rushes of 27 and 7 yards, the latter to the Nebraska 29 and 15 more were tacked on for a hands-to-the-face penalty. Farrell had a grab for 7, Dobbins ran for 4 and then the score.

Nebraska pulled to within one score, 30-24, on an 18-yard field goal by Barret Pickering with 7:46 to play as the Cornhuskers squandered a 46-yard catch by Morgan to the OSU 20. They had first-and-goal from the 8 but got no further than the 4 and Martinez threw an incompletion on third down.

OSU went 82 yards in seven plays, chewing 2:48 off the clock. The big plays before the score were Johnnie Dixon’s 12-yard catch and a 17-yard reception for Farrell. Haskins’ run for a two points failed.

The Buckeyes got the ball back and ran the clock out.