Ohio State Head Coach Ryan Day: ‘It Will Continue To Be Our 1st Priority To Recruit Ohio’ 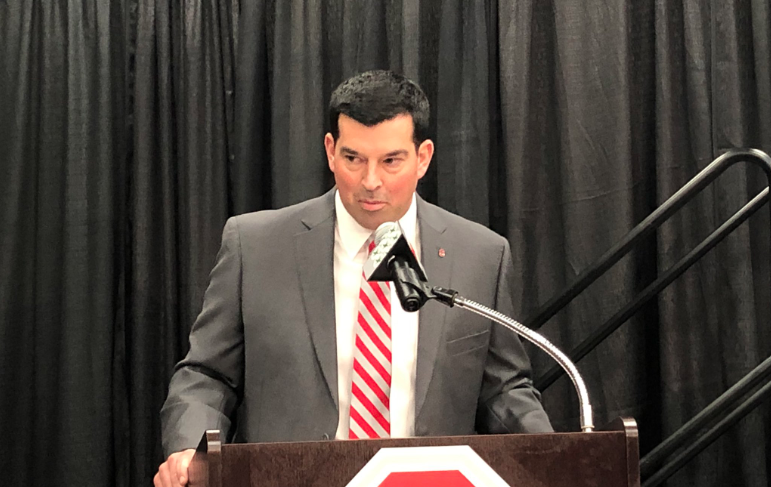 Throughout the hour-long press conference that took place Tuesday afternoon at the Fawcett Center, where Meyer handed the Buckeyes’ keys over to Day with Smith’s blessing, efforts on the trail were among the talking points while the three were explaining OSU’s leadership transition.

But to start, Day drove home an important point in his opening remarks when he spoke directly to coaches and players on high school football teams scattered throughout the talent crop of Ohio State’s back yard — from Columbus to state borders.

“To the high school coaches in Ohio: We have the best coaches and some of the best high school programs in all of America here at Ohio,” he said. “And it will continue to be our first priority to recruit Ohio football players. Every young football player in the state of Ohio should dream about one day becoming a Buckeye. And it’s our staff’s responsibility to make sure we recruit them at the highest level.”

Those words from the Buckeyes’ new head man resonated with the Ohio high school football community, specifically trickling to two top coaches in the state with ties to the program. Mentor head coach Steve Trivisonno, who developed the Cardinals’ duo of four-star offensive tackle Ryan Jacoby and defensive end Noah Potter — respectively committed to OSU’s 2019 class since March 1 and April 16 — credited Day for publicly placing a premium on in-state recruiting.

Despite his status as an outsider of sorts from Manchester, N.H., Day appears to understand the imperative piece local prospects play into Ohio State’s success as he balances those efforts with the increasingly national approach Meyer has built over the past seven years.

“That’s great to hear — I think that’s going to be something he’s got to do,” Trivisonno told BSB. “(Day) isn’t an Ohio guy, so sometimes people don’t quite get that. I think they’ve got to understand the importance of it. Nice part is he’s been in the system here, so he understands what Ohio high school football is and then obviously what he’s got to do to make it and keep it happy. You’ve always got to walk that line. You can’t make the people in Ohio mad. That’s one of those few things.

“If you want to survive, you better do it or you’re not going to be here long. In the end, you’ve still got to have the Ohio guys — Ohio guys can’t be leaving, you’ve got to go get them and that’s the key. Obviously, Coach Day came out and Ryan Day said that (Tuesday) and that’s what’s going to make him successful and make him that long-term success here. He’ll come on that ability to do that.”

“There’s just a wealth of talent throughout the state, but especially when you look at northeast Ohio and then Cincinnati part of Ohio, with some of the schools from both regions that produce some great talent. I think you would be missing the boat if you didn’t go after some of that talent. Not to mention, just talent all over the state.”

As a mentor to a pair of former Tigers in sophomore wide receiver Jaylen Harris and freshman defensive end Tyreke Smith, Stephens watched closely when the then-acting Day guided the Buckeyes through training camp in August to starting 3-0 in September.

“I paid close attention to Coach Day when he was serving as interim head coach,” Stephens said. “I think one of the things I looked at was just his demeanor on the sidelines and how interacted with players. Obviously, having two former Cleveland Heights players down there, I can only go by judging him from that standpoint. But from everything I’ve seen, I’ve been impressed.”

Among the 20 commitments in OSU’s classes of 2019 and 2020, only four hail from Ohio — Jacoby, Potter, Lexington 2019 four-star outside linebacker Cade Stover and Cincinnati St. Xavier 2020 five-star offensive tackle Paris Johnson — although the coaching staff has been involved with an abundance of in-state recruits across both cycles. On the roster, Ohio State boasts more than half (64) of its players — scholarship and walk-on — from the local scene.

As Day aims to continue the trend of keeping the state’s top talent home, Stephens sees promise in the way the Buckeyes’ new head coach approaches the gig — on the field and on the trail.

“He has a certain demeanor about him that I think you need to be a head coach at The Ohio State University and I think he’s going to do a phenomenal job,” Stephens said. “Everything I’ve heard about him is that he’s just tremendous — not just a tremendous coach, but just a tremendous person in general.”