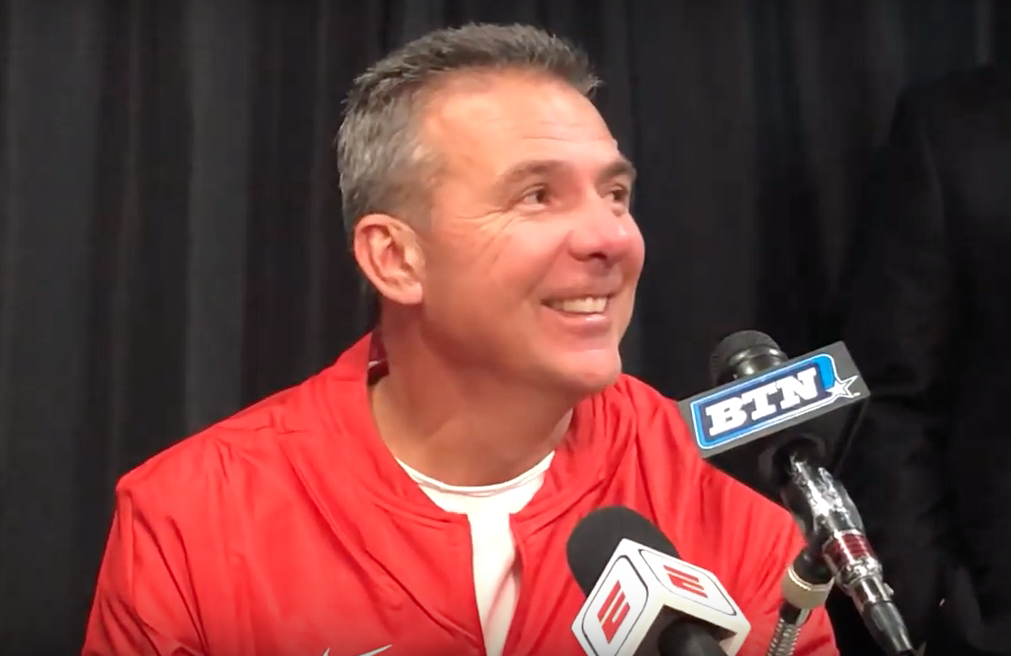 It was announced Tuesday morning by Ohio State that the Rose Bowl will be Urban Meyer’s last game as the Buckeyes’ head football coach.

Meyer took over a reeling program ahead of the 2012 season and immediately brought Ohio State back to national prominence after a one-year hiatus. The Buckeyes, despite dealing with a bowl ban, went undefeated in 2012 and a year later were one game away from playing for the final BCS national title.

The 54-year-old coach had plenty of memorable moments at Ohio State in his seven years as the head of the program. Here are the top five from Buckeye Sports Bulletin.

Meyer’s first game as head coach came against Miami (Ohio) in Ohio Stadium on Sept.  1, 2012, and went well overall for the Buckeyes. Ohio State won 56-10, and with the game well in hand by the fourth quarter, Meyer admitted he took a moment to stand back and take in the scenes.

“The day overall, it was a great day. Hang on Sloopy kicked it off in the fourth quarter. And I stared at that for a while, watched it,” he said. “Told a couple of people that I’ve never seen that before. Checked that out.”

It was the first of 24 straight wins to kick off his tenure at Ohio State, a streak that wouldn’t end until the 2013 Big Ten title game against Michigan State.

Meyer’s first season was hampered by a bowl ban, making Ohio State’s regular season finale against Michigan the final game of his first season with the Buckeyes. The night before at Earle Bruce’s famous ‘Beat Michigan Tailgate’ Meyer got emotional when talking about the senior class he had inherited.

The Buckeyes went on to beat Michigan 26-21 in Ohio Stadium, the first of seven wins Meyer would accumulate against the Wolverines.

Ohio State’s comeback win over Penn State in 2017 was memorable for multiple reasons, but mainly because of the manner in which it was done.

Meyer’s squad fell behind by as many as 18 points in the game, one they had to have to keep playoff hopes alive. Playing at home and hoping to avenge 2016’s lone regular season loss, Meyer’s squad staged a furious comeback as the Buckeyes won 39-38 in one of the best games of Meyer’s tenure.

The week that followed took a bit away from the victory over the Nittany Lions, but in the moment, the win was as big as any victory Meyer had collected in his time at Ohio State.

We packaged these two together because they were both significant in Meyer’s career.

The first, a double-overtime thriller, sent Ohio State back to the College Football Playoff despite not winning the conference title. Meyer famously collapsed to the ground in a moment of exhaustion and jubilation as Curtis Samuel waltzed into the end zone for the game-winning score.

Two years later, in what would be his final Michigan game, Meyer was the underdog against the Wolverines for the first time in his career. All his team did was throttle the No. 4-ranked Maize and Blue, 62-39, to advance to a second straight Big Ten title game.

The Buckeyes would go on to defeat Northwestern in the game and capture a second straight conference crown after beating Wisconsin for the championship a year earlier.

This one is pretty easy, but you can’t mention Ohio State’s 2014 national title without mentioning the two games that came before the 42-20 win over Oregon in the championship.

Meyer and then-offensive coordinator Tom Herman put together some of the best game plans in Ohio State history for Cardale Jones to step in for J.T. Barrett in the final three games. Jones led the Buckeyes to wins over Wisconsin (59-0 in the Big Ten title game), Alabama (42-35 in the Sugar Bowl) and the Ducks (42-20 in the national championship game) to capture Ohio State’s first title since 2002.

It was the lone national title Meyer would win in his seven years at Ohio State, but because of the manner in which it was done, it is arguably the most memorable national title in school history.