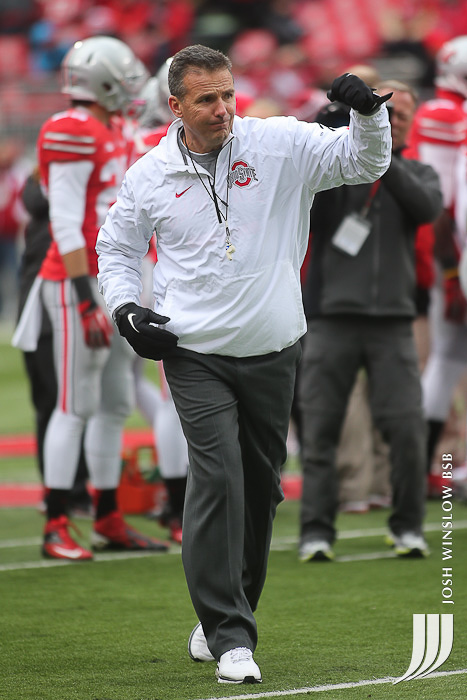 Urban Meyer announced his retirement from coaching on Tuesday and said he believes he will not return to coaching again. That being said, his career in athletics could be far from over.

Meyer and Ohio State athletic director Gene Smith both mentioned the idea of keeping the outgoing head coach around Columbus after the Rose Bowl, however it was clear that no concrete decision had been made.

“I look forward to working with Urban in his new capacity,” Smith said in his opening comments Tuesday. “You’ll soon get your new goals and objectives in your new capacity as together we seek to maximize the potential of our 30 head coaches and 68 assistant coaches and over 1,000 student-athletes that we’re all blessed to serve.”

Meyer, who is just 54 years old, worked for ESPN as an in-game analyst during his one year hiatus from coaching in 2011 after he left his head coaching job at Florida. As he once again prepares for life away from the sideline, Meyer said he still has a passion for helping young people achieve their goals.

“I hope to somehow have an impact on our student-athletes and be involved in this athletic department and this great university,” he said.

When asked if he was done coaching for good, Meyer said, “I believe I will not coach again.”

Meyer also made a point to mention that his son Nate is just an hour and a half away getting ready to play his first baseball season at the University of Cincinnati. Despite having just one game left to coach, Meyer said he wants to help out however he can with the university and the football program in the future.

“I love Columbus. I love Muirfield, where I live. I’ve always been a Buckeye as long as I can remember,” Meyer said. “Gene Smith, like I said, our relationship has always been good. It’s over the top now. And I trust him with my life. And our families are very close.

“I’m going to still call him boss. However I can help this — I believe in Ohio State,” Meyer continued. “I believe in the spirit when you walk around this campus. I believe in Buckeye Nation, because I lived it my entire life. I believe that this is a different place. And I want to help in any way I can. And I believe in our new head coach.”

Ryan Day, who will take over the head coaching duties full time on Jan. 2, said he will lean on Meyer for coaching advice once the job is his. Day has spent the last two years of his coaching career under Meyer at Ohio State.