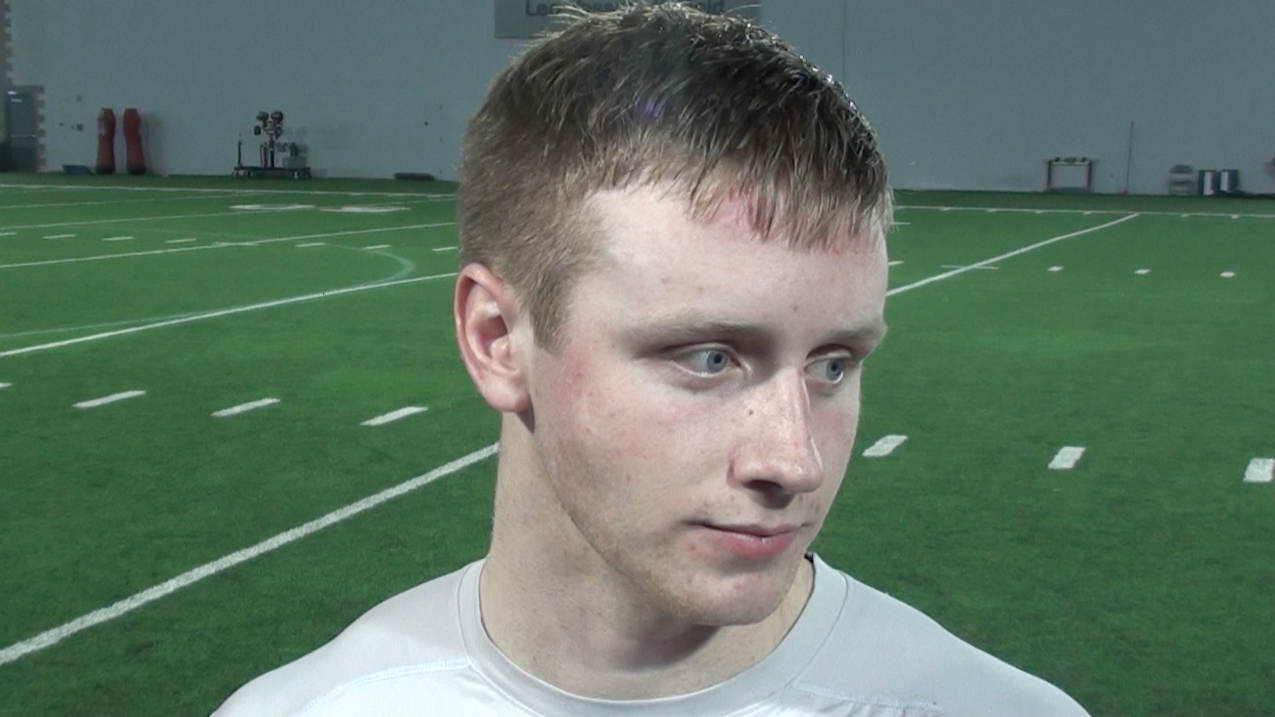 When quarterback Matthew Baldwin arrived at Ohio State from Austin (Texas) Lake Travis last January, his 2018 spring camp was a polar opposite compared to what he does now.

In the thick of the Buckeyes’ current position battle with Georgia transfer and OSU sophomore Justin Fields, Baldwin thinks back to where he was last March and April when he was fresh off a torn ACL.

Restricted to a far corner of the Woody Hayes Athletic Center’s indoor practice field with stationary bikes, speed ladders and conditioning equipment, Baldwin rehabbed his right knee while he started up a long road back.

“I was in the pit over there … that’s where the injured guys workout over there,” Baldwin said Friday after OSU’s second practice of spring camp. “It’s generally not a very happy place. … I really didn’t get to do much. It was all mental, trying to learn the stuff. Mental reps are awesome and that’s how you really learn when you can’t play, but you can’t really know an offense until you’re in it, playing. And I learned that in the season when I actually was getting reps. The offense just started clicking.”

Baldwin sat behind Dwayne Haskins, Tate Martell and Chris Chugunov while Ohio State went 13-1 in the fall. Haskins declared for the NFL draft, Martell transferred to Miami (Fla.) and Chugunov returned as Baldwin and Fields headline the Buckeyes’ signal callers in the spring competition.

“(Fields) probably went to Georgia with that same mindset, come in and start, and Jake Fromm held him off,” Baldwin said. “He has his strengths and his weaknesses. I have my strengths and my weaknesses. I’m just glad I can get to compete against a guy like that. No one wants to be handed anything, I don’t think. You don’t feel like you earned it. You’re not going to be handed things here. So I never expected that, coming in.”

In his first of two years as offensive coordinator/quarterbacks coach before he became head coach, Ryan Day handpicked Baldwin in December 2017 for OSU’s 2018 recruiting class. Day went out and got Fields, but Baldwin knew what type of room he was entering upon his early enrollment last spring with Haskins, Martell and Joe Burrow around at the time.

“Tate was also a five-star,” Baldwin said. “So I knew, no matter what, you’re going to be competing against someone good here. I think I was kind of chasing Tate. I think that was kind of my position, so I had a fire under me. And then now Tate leaves and Justin comes, so I guess he’s kind of chasing me or we’re kind of fighting each other. So it is kind of different, but I think I have the same motivation.”

Around several old and new faces on offense, from fellow Lake Travis product and current freshman wide receiver Garrett Wilson to passing game coordinator/quarterbacks coach Michael Yurcich, Baldwin looks to take the next step at quarterback while Fields pushes. As practices progress, so does Baldwin — physically and mentally — from a far different perspective than he had in his first go-around.

“I feel, pretty much, 100 percent right now,” Baldwin said. “I think the only thing — I’d say my body is 100 percent. The only thing now is confidence, you know? Like, sometimes when I run, I might subconsciously run — trying to cut left, not planting as hard on my right leg, just not me thinking about it because it happens. That’s just something that takes time.”