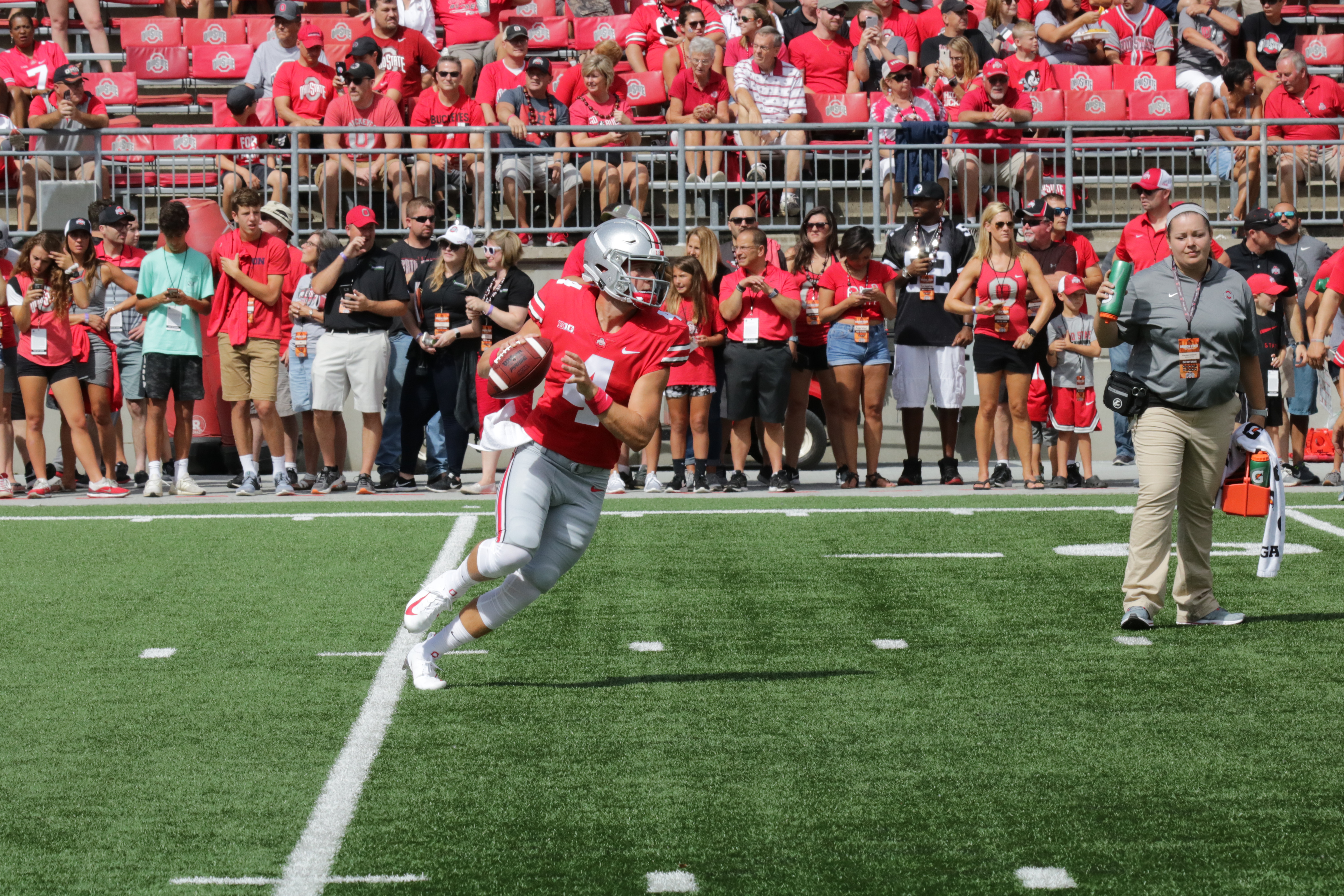 Down to three scholarship quarterbacks after sophomore Tate Martell announced his transfer to Miami (Fla.) on Tuesday, Ohio State keeps its fingers crossed as sophomore Justin Fields awaits his decision on immediate eligibility.

Until the NCAA clarifies the hardship-waiver fate of Fields, the former five-star recruit and No. 2 overall prospect in the 2018 class who announced his transfer from Georgia to the Buckeyes on Jan. 4, head coach Ryan Day is left with just two scholarship signal callers.

One of those arms is redshirt freshman Matthew Baldwin, who projects as OSU’s next man up — the other is fifth-year senior Chris Chugunov, recruited by Day to bring Ohio State’s offense an experienced option in case of emergency.

“Somebody with some experience,” Day said of what the Buckeyes were looking for, searching into August when Chugunov transferred with two years of immediate eligibility before the 2018 season. “Somebody that’s played in some college football games. Somebody that is old enough and mature enough where he’s going to be able to come in and, in a short period of time, pick up the offense, and then quick release and accuracy.”

The 6-1, 203-pound Chugunov came to OSU after three years at West Virginia. With the Mountaineers, he completed 45 of his 95 passes (47.8 percent) for three touchdowns to three interceptions across 10 games (two starts) in former head coach Dana Holgorsen‘s air raid offense.

As the backup to Will Grier, who elected not to enter the NFL draft and came back to WVU for the 2018 campaign, Chugunov chose to transfer rather and pursue a master’s degree elsewhere. With his bachelor’s degree in finance, he picked Ohio State over Arizona State and Florida Tech (Division II).

“I think that’s a lot better for him,” Milich told BSB. “Chris is a passer. He makes quick decisions. He’s a quick hitter. He throws the deep ball. If you’re looking for him to run the ball — that’s the wrong guy.

“What people don’t really get a lot out of him, too, because he’s been in shotgun for so much, but he was younger, we had him under center. If you watch him, if he were to take plays under center, he had great feet.

“His pass drops were phenomenal. Guys get in shotgun and they get very lazy with their feet. Chris is not lazy with his feet. His feet are tremendous. So if you watch that, if you ever seem him under center and drop back, he’s got that classic drop-back passer footwork. So I think, in this situation, I think it fits him really well.”

By the fall, with an eligible Fields and a healthy Baldwin, Chugunov is likely to return to third string as he completes his master’s degree in hospitality management.

Two months away from the spring, however, Chugunov’s position with Baldwin among OSU’s scholarship quarterbacks after Fields is imperative.