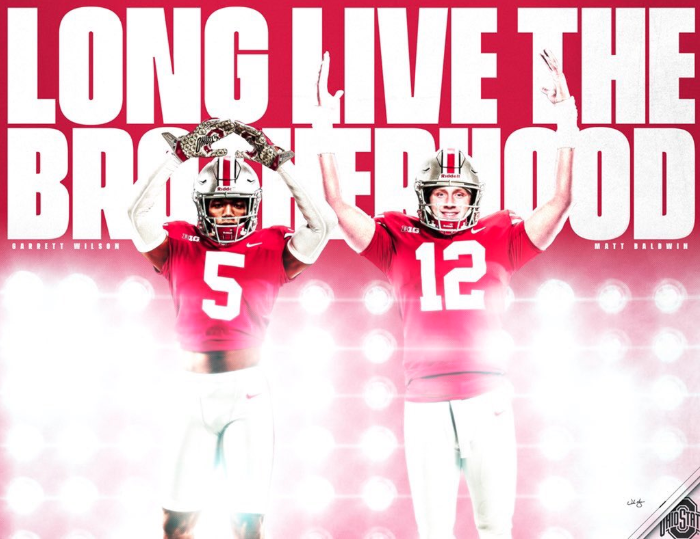 Before the Buckeyes brought Matthew Baldwin and Garrett Wilson to Ohio State over the past two recruiting cycles, the quarterback-receiver tandem tore up the high school football scene.

After the duo led Austin Lake Travis to the 2017 Texas 6A Division I state finals, the four-star Baldwin had been committed since Dec. 7, 2017, and enrolled early at OSU in January 2018 before Wilson followed suit.

At the end of the spring, the five-star Wilson committed April 29 to Ohio State’s 2019 class, sticking with the Buckeyes throughout the fall before Dec. 19 when he ultimately inked his letter of intent.

Now in Columbus, Wilson is enrolled and back with Baldwin, looking to pick up where they left off from their final high school season together March 6 when spring camp starts.

While practices at the Woody Hayes Athletic Center resume with Baldwin in an uphill battle against Georgia transfer and sophomore quarterback Justin Fields, he embraces his reunion as a familiar face and top target enters OSU’s offense.

“Ten out of 10, the excitement level, if you want to put it on a scale,” Baldwin told BSB in December as he anticipated his wide receiver’s Jan. 7 arrival. “I just can’t wait. He and I have a great connection, great chemistry. I loved throwing to him in high school, so I just can’t wait for him to be here.”

With Wilson, Baldwin catapulted the Cavaliers to a 13-3 record in 2017 — his only season as a starter — highlighted by a 70-percent completion rate and 44 touchdown passes with over 4,000 yards through the air. As a junior, Wilson benefited directly from Baldwin’s gunslinging when he recorded 98 receptions and 1,7774 yards (18.1 average) while totaling 34 touchdowns in his breakout season.

“With Baldwin, I know what I’m getting myself into,” Wilson said. “I’ve been around him for the last five, six years. He’s such a hard worker, such a good person. He’s someone I want to be like. I feel like if I hang around people like that, that’s who I’m going to be.

“I love that kid. I’ve always wanted (to team up). I feel like we didn’t end the way we wanted to in high school. We ended up losing the state game, and it’s just great to come back up here and get the chance to work with him again and finish the way we want to.”

After he tweaked his right knee late in the 28-14 semifinal win for Lake Travis over Katy on Dec. 16, 2017, Baldwin’s attempt to play through the injury was unsuccessful. Baldwin’s right knee buckled on his first drop back to pass in the Dec. 23, 2017, final against Allen and he left the game as the Cavaliers fell 35-33.

Back to 100 percent from the torn ACL as he enters his second spring camp, Baldwin takes the first year in stride with Wilson among the new crop of wideouts coming on. However the signal callers shake out in April and beyond, Wilson is happy to have Baldwin back by his side as he catches on and learns the offense.

“I had an idea (of the offense) from Baldwin,” Wilson said. “I talked to him at least twice a week while I was still in high school. We definitely kept in touch. He’s always checking on me, I was checking on him. He definitely gave me some tidbits of what to expect and stuff like that.

“Even now while I’m here, we’ll go out and do a workout and I’m asking him, ‘What do you think this is going to be like?’ And he’s telling me. So it’s definitely good to have someone like that around.”