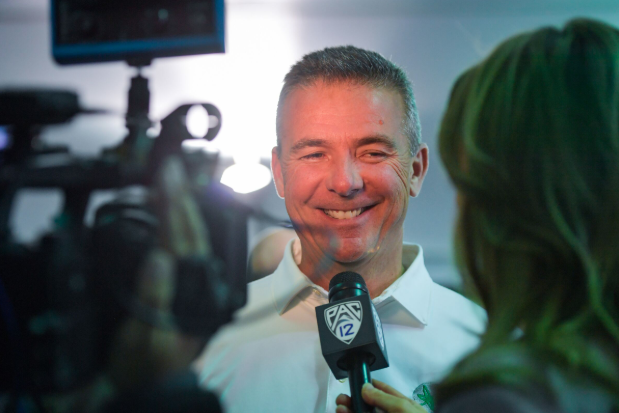 Urban Meyer is no longer Ohio State’s head coach, but the former seven-year leader of the Buckeyes will be back around college football for the 2019 season.

Meyer (2012-18), who on Dec. 4 announced his retirement for after OSU’s game against Washington in the Rose Bowl on Jan. 1, has been hired by Fox as a college football studio analyst.

According to Andrew Marchand of the New York Post, Fox is bringing on Meyer and former Southern California running back Reggie Bush (2003-05) for a “yet-to-be-named Saturday morning pregame show” to air at 11 a.m. ET on network television in the fall.

“With a head coach that won three national titles in 10 years, two of the most successful college quarterbacks in recent memory and one of the sport’s most electric running backs, our new college football pregame show has the game covered from all angles,” Fox Sports National Networks president Mark Silverman said in a statement. “Not only will this all-star cast resonate with viewers because of their recent on-field accomplishments, but this group is going to have a lot of fun discussing the games each week.”

On Jan. 18, Michael McCarthy of Sporting News first reported Fox was close to finalizing a deal with Meyer as “its star college football analyst” for the potential pregame show.

Common themes from the reports via Marchand and McCarthy indicated that Fox sees Meyer, 54, as a marquee piece to put its coverage of college football on par with ESPN’s “College GameDay.”

McCarthy wrote two months ago that Fox views Meyer as an on-air talent who can have a similar impact as former Ohio State quarterback Kirk Herbstreit (1989-92) has had across the past few decades at ESPN.

“Urban and Reggie will make fantastic additions to our already impressive college football roster, and we’re looking forward to seeing Brady shine in his new role,” Silverman said. “We think that this entire lineup will educate and entertain viewers with the unique FOX attitude that viewers are familiar with.”

Meyer last worked as a studio analyst with ESPN in 2011, when he was between head-coaching jobs at Florida (2005-09) and Ohio State.

While the structure of his job with Fox makes Meyer work from its Los Angeles studios early in the fall of 2019, the program broadcasts road trips for games later on.

Given the weekly duties of the position, Meyer should still be able to conduct his role under Gene Smith in the athletic department.

Meyer stepped down from his post with the Buckeyes, who on Jan. 2 officially elevated two-year offensive coordinator/quarterbacks coach Ryan Day (2017-18) to head coach, after he had health concerns flare up throughout what was a rocky 2018 campaign before OSU finished 13-1.

An issue that stemmed from an arachnoid cyst on his brain caused Meyer headaches over the course of the fall, culminated by a scene on the sideline against Indiana on Oct. 6 when he dropped to a knee.

After a three-game suspension in September for the mismanagement of former wide receivers coach Zach Smith (2012-18), Meyer made his full-time return Sept. 22, guiding the team to a 10-1 mark.