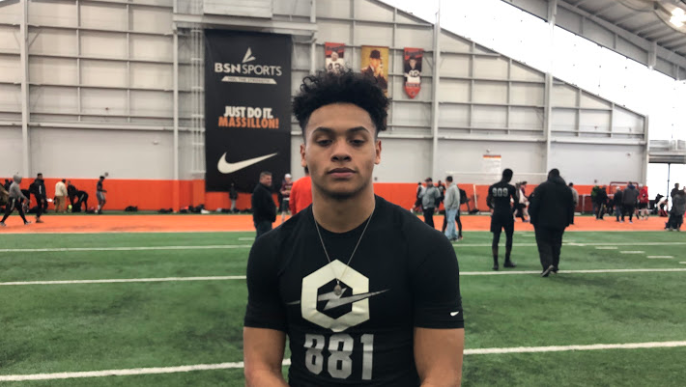 MASSILLON, Ohio — With ability to play just about anywhere on the field, Cameron Martinez chose wide receiver Sunday at The Opening Regional Canton and starred as one of the camp’s top performers.

After a junior campaign at Muskegon, Mich., where he won MLive Football Player of the Year as a dual-threat quarterback, Martinez shattered single-season school records on the ground with 254 rushes for 2,527 yards (9.95 average) and 38 touchdowns while completing 31 of 56 passes (55.4 percent) for 645 yards and 13 touchdowns to one interception.

Martinez has since amassed 20 offers with a Feb. 15 scholarship from Ohio State among the flurry.

“I’m better with the ball in my hands,” Martinez told BSB. “But naturally, I think I’m better at defense. A lot of teams give me the option of what I want to do, so it’s really going to come down to how I feel and what I want to play. … If I could, I would play both right now.”

Before he competed at Massillon Washington and put on a clinic with his straight-line speed and route-running finesse, Martinez made a visit last Friday to see the Buckeyes, who conducted day eight of spring camp. His first OSU trip since the offer provided an eye-opening experience, where he connected with head coach Ryan Day and assistants on both sides of the ball.

“When they offered me … it seemed like I was more on the defensive side,” Martinez said. “I came down there Friday and (wide receivers coach) Brian Hartline loved me on the offensive side. He thought he could see me at the H-back position like the K.J. Hill, Parris Campbell type because they’re not really recruiting any H-backs right now.

“So it’s kind of going to come down to me. I think, personally — if I had to choose right now — I would maybe play defense because Coach Hafley’s more of my guy. But I’m in contact with Hafley and Hartline a lot. They’re cool.”

As he builds his bond with Hafley, Friday’s visit opened Martinez’s eyes to pro potential on defense. Hafley, who spent the past seven years in the NFL and most recently spent the 2016-18 seasons as defensive backs coach of the San Francisco 49ers, sat Martinez down and broke down how his athleticism fits into Ohio State’s new position — the “bullet” — as a hybrid safety/linebacker.

“That’s what it was kind of like,” Martinez said. “(Hafley) was playing film of somebody he used to coach in the league. He showed me what he does, moving around, covering, coming off the edge. I love moving around, so any chance I can get to do that, I think can excel in that position — especially if I’m thinking about going to the league, aspirations of doing that, too. So I think doing that, I would love to (play the position).”

The visit marked years in the making for Martinez. He spent his earlier career in Columbus at summer camps, learning from former head coach Urban Meyer and the rest of the staff.

“When I was younger, I went there for some one-day camps and some kids camps,” Martinez said. “This was my first time with the offer, talking to all the coaches and I just had a blast. I loved it. I mean, I love everything about it and what they have to offer. It was just a great experience.”

Specifically with Hartline, Martinez experienced what so many wide receiver recruits have said about the Buckeyes’ second-year position coach. Day and Hafley have set the foundation with Martinez, but he solidified his relationship with Hartline as well.

“A lot of it was with Coach Hafley, too, and Coach Day, but he’s just an energetic guy,” Martinez said of Hartline. “Every time I talk to people, they say there’s no coach like Hartline. He showed me — he had a presentation for me, talked about (wide receiver potential) — he really gets the best out of his players. With a coach like that, that gets you better, it’s good.”

Northwestern (Sept. 29), Michigan (Nov. 11) and Michigan State (Jan. 11) started to pick up Martinez’s recruitment with scholarships throughout his junior year. He added Minnesota, Purdue and Penn State in January before Iowa State, Nebraska and Wisconsin in February with visits lined up while balancing an AAU basketball slate.

“I’m doing AAU (basketball) right now, so (visiting) spring (football) games are tough for me,” said Martinez, who led Muskegon to a 13-1 mark on the gridiron and before the Big Reds posted a 21-4 record on the hardwood. “My dad’s the basketball coach. I really like basketball, too, so I’m doing that. I don’t really have any spring game dates, but maybe during the week. I’m taking a whole spring break trip going to colleges next week — I actually leave (Monday) — to Northwestern, Iowa, Iowa State, Wisconsin, Minnesota, Purdue, Indiana.”

Had a good time at U〽️ with the family!! pic.twitter.com/DJo5YtloEd

Martinez stayed home last weekend when he made his local visit with Michigan, which joins OSU atop the Big Ten schools in hot pursuit of him. While he sees the process pick up and looks to cut down his top choices by the summer, Martinez is in no rush to make a commitment.

“I’m in no hurry right now,” Martinez said. “I’d love to do it before the season. But like I said, I’ll get an opportunity to see all these teams and get a blueprint out. Hopefully, I want to have a top five at least in the summer. So if I can, I’ll do that. And if I have to do it before the season or after, I’m fine. But like I said, I’m just in no hurry.”