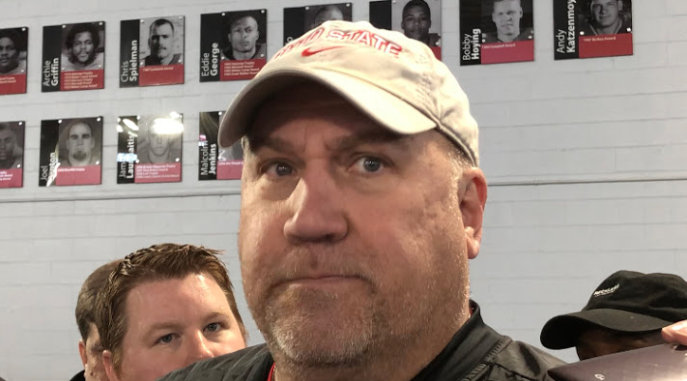 Ohio State started spring camp March 6 with a bit of a curveball on the offensive line, where head coach Ryan Day revealed junior left tackle Thayer Munford would be out for the next month and change as he recovers from his lower-back issue, leaving position coach Greg Studrawa no choice but to develop depth among those left in the trenches.

The departures of four starters from the 2018 team — left guard Malcolm Pridgeon, center Michael Jordan, right guard Demetrius Knox and right tackle Isaiah Prince — leave holes on the offensive line. Munford and sophomore Wyatt Davis, who started the final two games of the fall as Knox’s replacement at right guard, return the experience as projected starters in the trenches for 2019.

“First of all, I don’t know how you replace those guys,” Studrawa said Monday after the team’s ninth practice of spring camp at the Woody Hayes Athletic Center.

“I’m excited about how the young guys are working right now,” Studrawa said. “Their development’s coming along really well.

“So I like where we’re at right now. Replacing (the four departures)? I don’t know. I’ll tell you, that’s hard. That was a lot of experience.”

Formerly the starting right guard as a sophomore in 2017 before he broke his left leg, which most recently followed with an early-September setback, Bowen is between both tackle spots — left and right — but a leader among the unit.

“It’s pretty natural,” Bowen said Monday. “I’ve played tackle throughout my time here, on and off. In camp, during 2017, I was actually playing left tackle because Jamarco Jones was sick. So that’s why they ended up moving me to right (guard). … I’ve always been playing tackle throughout my career.

“I feel good emotionally. It’s fun to be the leader. It’s fun to be looked at as a guy that is counted on, especially helping the young guys along — (freshman) Ryan Jacoby, early enrollee — it’s been fun just taking on that leadership role.”

Finding the best five up front remains a work in progress until Jackson and Miller join the competition, giving redshirt freshman center Matthew Jones and redshirt freshman tackle Max Wray more reps in the meantime, while Petit-Frere rounds out the underclassmen gaining experience and making progress as he spends his first spring camp working with Alabi and Bowen at both tackle spots.

“It’s different,” Petit-Frere said Monday. “I’ve been learning a lot, getting better. Winter was a big time for me. (Strength coach Mickey Marotti) really got me ready. It’s feeling a lot like how (the 2018) Under Armour (All-American Game) was because I’m competing. I know what I’m doing. So now it’s more like, ‘Go out and do it. Be athletic. Do your thing. Be confident.’ Do everything like that.”