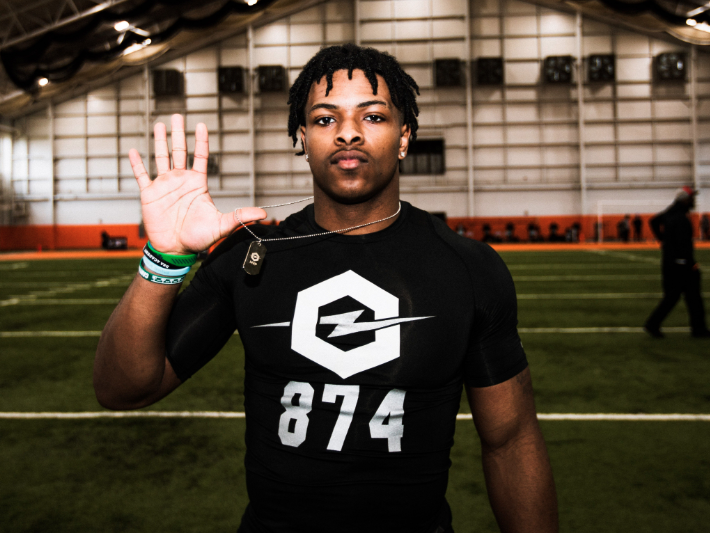 MASSILLON, Ohio — Despite wintry weather, the show went on Sunday for The Opening Regional Canton, which showcased some of the top talent in Ohio and its surrounding region at Massillon Washington’s indoor field.

Among the high school football players in attendance, an abundance of Ohio State top targets and offer candidates competed. Across all positions, BSB breaks down the camp’s top takeaways with observations and notes.

Fresh off Friday’s visit, his first since he added a Feb. 15 offer from the Buckeyes, Cameron Martinez made defensive backs look silly at The Opening Regional Canton. Recruited as an athlete in the 2020 recruiting class with takers on offense and defense, Martinez worked out at wide receiver and stole the show. The position’s MVP went to Oak Park, Mich., 2020 three-star wide receiver Maliq Carr (6-6, 230), but Martinez verified his ability on offense as he blazed by defenders in a variety of routes. Among his offers, a list of more than 20 scholarships, Martinez (5-11, 175) told BSB he came away from the OSU trip with interest as an H-back after conversations with head coach Ryan Day and wide receivers coach Brian Hartline.

Without the likes of Cincinnati St. Xavier five-star offensive tackle Paris Johnson (6-7 1/2, 295) or Oak Park, Mich., five-star offensive guard Justin Rogers (6-2 1/2, 311), who were previously listed on The Opening Regional Canton’s roster but ultimately did not attend, an Ohio State commitment highlighted the offensive linemen in attendance. Three days after OSU offered Trey Leroux during March 8’s visit, he accepted his scholarship and joined the Buckeyes’ 2020 group. The 6-8, 320-pounder was hard to miss when lined up among all the linemen and held his own with an up-and-down performance during 1-on-1 drills. He got beat early on but recovered well during later snaps, moving his feet and keeping each opposing defensive lineman in front of him. Looking to build the class and touch base with offensive line coach Greg Studrawa, Leroux told BSB he makes his next visit April 13 for OSU’s spring game.

Norwalk (Ohio) High 2020 three-star offensive tackle and Ohio State commitment Trey Leroux is a work in progress, but he recovered well in the later portion of his 1-on-1 reps.

Leroux made 6-8, 320 look easy at times with the way he stopped and cut to keep his defender in front. pic.twitter.com/EDsF5zNqh7

Ahead of his Monday visit for Ohio State’s ninth practice of spring camp at the Woody Hayes Athletic Center, Damon Payne put on a show en route to defensive line MVP. Offered by OSU last April, Payne is listed at offensive guard but has received looks from the Buckeyes as a defensive tackle. The 6-4, 275-pounder faced Groveport (Ohio) Madison 2020 three-star offensive guard/defensive tackle Terah Edwards at the end of the 1-on-1 drills and powered past the 6-4, 310-pounder — who had a solid day himself. Whether on offense or defense, the two-way lineman looks the part of a top target for the Buckeyes. Payne and West Bloomfield, Mich., 2021 running back Donovan Edwards (5-11, 190) each told BSB about visiting Monday for Buckeyes practice.

Along the same lines as Payne, Braiden McGregor showed why he has Ohio State among his hopefuls as the four-star defensive end from Port Huron (Mich.) Northern delves deeper into the process. McGregor said he plans to put out his top 10 at some point Monday and the Buckeyes are likely in the cut with Day, defensive line coach Larry Johnson and co-defensive coordinator Greg Mattison recruiting him hard. On the field, McGregor blew by offensive linemen off the edge. Avon, Ind., 2021 offensive tackle Blake Fisher (6-6, 300) faced off against McGregor at the end of the 1-on-1 drills and held his own before the 6-5 1/2, 248-pounder clawed through the final rep to take two out of three. While OSU competes with Clemson and Michigan, among others, McGregor has an official visit to Notre Dame set next weekend for Friday through Sunday.

Despite consecutive fumbles, DeaMonte Trayanum took advice from coaches and responded strong as he finished his performance with running back MVP. The 6-0, 220-pounder looked the part and stuck around afterward to do drills with the defensive backs where he showed his athleticism and versatility in coverage against wide receivers  — and earned an invite to The Opening Finals at The Star in Frisco, Texas, from June 30-July 3. Trayanum took a March 19 visit to Ohio State and remains high on the Buckeyes, who continue to recruit him as an athlete with running back and defensive positions among the possibilities. A pair of other 2020 targets for OSU — Dublin Coffman four-star Michael Drennen (5-11, 195) and Fairfield, Ohio, three-star Jutahn McClain (5-10, 180) — showed shiftiness as all-purpose backs, while Edwards also shined.