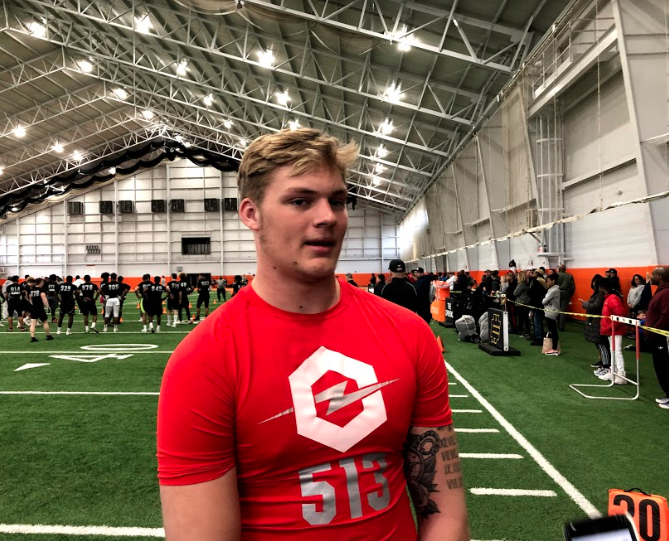 MASSILLON, Ohio — Four months ago, Greg Mattison was Michigan’s defensive line coach and the lead recruiter in the Wolverines’ hunt for Braiden McGregor as they worked aggressively to keep one of their top targets home.

In the time since then, Mattison crossed enemy lines Jan. 7, leaving U-M after his second stint — he coached there from 1992-96 and 2011-18 — to join first-year head coach Ryan Day’s 2019 staff at Ohio State as co-defensive coordinator.

As a result, the Buckeyes’ pursuit of Port Huron (Mich.) Northern’s McGregor got a boost.

OSU was already heavily involved with the 2020 four-star defensive end, but teaming Mattison and sixth-year defensive line coach Larry Johnson together — plus McGregor’s tie to Day — might make for a direct hit against its rival up north.

Trading in his maize and blue for scarlet and gray, Mattison’s relationship with McGregor stays the same — but the message has clearly changed.

“(Mattison to Ohio State) definitely changed my perspective on the way this whole recruiting thing goes,” McGregor said Sunday at The Opening Regional Canton. “I was like, ‘OK, it is what it is.’ And then you kind of think about it, and (start to question), ‘But all the stuff you said negative about Ohio State?’ And it’s like, ‘OK.’ You realize he’s the same guy.

“I like him a lot. He was one of my favorite recruiters out of Michigan. He was at a couple basketball games — him and Coach Day were there. I just really like him a lot. I have a good relationship with (Mattison) and his wife.”

After he completed his junior season on the hardwood, McGregor’s focus shifted back to the gridiron last weekend at Massillon Washington’s Paul L. David Athletic Training Center.

The 6-5 1/2, 248-pounder put on a clinic at defensive end with his burst off the edge as he earned a top-five finish among the regional defensive linemen in attendance from the classes of 2020 and 2021.

Ahead of his first official visit Friday at Notre Dame, McGregor walked through the next steps in a recruitment where he has the Buckeyes among the favorites.

“Coach Johnson, Coach Day and Coach Mattison — every single day, I text them,” McGregor said. “They’re the guys that stay in contact with me every day. I’ve gotten to know them really well and I like them a lot.”

McGregor’s process picked up last April when he strung together his first few offers from powerhouse programs, ignited by the Fighting Irish (April 10) and Michigan (April 21) across an 11-day span.

He camped June 12 at OSU for its second one-day position camp of the summer, getting his foot in the door before receiving an offer Oct. 3 and visiting for the Nebraska game Nov. 3.

Six months later, McGregor has seen his recruitment go completely national with 36 offers to his name, although he trimmed the list down Monday and a released a top 10.

“I’m really high with Ohio State,” said McGregor, who added that he hopes to make his return during a weekday trip in April. “I like them a lot. I like the coaching staff there.”

Despite the cut to 10, McGregor’s process appears to be winding down as several schools — Clemson, Notre Dame and U-M — take priority in the pack with Ohio State. Alabama, Florida, LSU, Miami (Fla.), Penn State and Oregon rounded out the others.

A southern swing last month — highlighted by Clemson (March 14), Florida (March 21), LSU (March 22) and Alabama (March 23) — opened McGregor’s eyes to possibilities away from home. Beyond those visits, he was supposed to see Penn State last Saturday but had his wisdom teeth taken out.

The road led McGregor back to the Midwest from Massillon to South Bend, Ind., where he gets his first official visit started over the weekend with the Fighting Irish, who have ninth-year head coach Brian Kelly and associate head coach/defensive line coach Mike Elston looking to lock him up.

“It’s kind of just to get back on campus, get a feel for it,” McGregor said of Notre Dame, which has a big official visit weekend built up as the Fighting Irish host Lake Forest, Ill., 2020 four-star defensive end target Rylie Mills and Denver Mullen 2020 four-star defensive tackle commitment Aidan Keanaaina. “I want to get around the players because I haven’t been around the players that much and I want to get to know what the kind of guys are at Notre Dame, so that’s the main thing that I’m going back for.”

Slated to get McGregor back on campus at some point in April, the Buckeyes are on a collision course with Notre Dame and the Wolverines while he sorts through his options.

Day, Johnson and Mattison make an intriguing case for OSU as its battle continues with the Fighting Irish and U-M.

But will it be enough to make a difference?