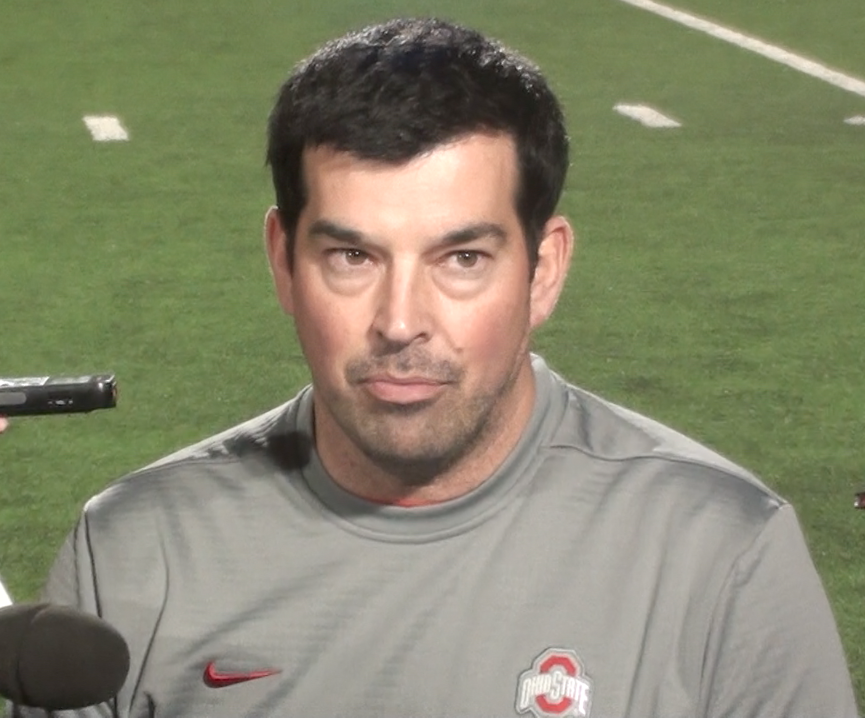 While one more game remains on the schedule for No. 6 Ohio State (12-1) before its football season closes Jan. 1 at 5 p.m. ET in the Rose Bowl against No. 10 Washington (10-3), recruiting never stops.

So when athletic director Gene Smith needed head coach Urban Meyer to decide Sunday on the 2019 season and beyond, efforts on the trail were at the forefront of the Buckeyes’ motives to promote second-year offensive coordinator/quarterbacks Ryan Day.

Since the announcement of Meyer’s retirement Tuesday at the Fawcett Center, Day joined OSU’s coaching staff across the country as they try to keep their classes of 2019 and 2020 intact while drawing in others to each group before an imperative slate of official visits from Dec. 7-9.

“The thing that really started to make things, when recruits started asking me, ‘Will you be here for four or five years?’ Recruits I’m very close with. And this early signing date has put pressure all over this world — the college football world. Our guys, Ryan’s going to be in four states (Wednesday), I imagine. He better be. Because we lost a week of recruiting. And the signing date’s coming up and that’s over 92 percent of the kids sign on that date,” said Meyer, who has catapulted the program into new heights on the trail from 2012-18.

“Also, if you sign a scholarship and the coach decides to leave after that they’re free to go. So this was — and people will say, ‘Why would you let recruiting get in the way?’ That’s a silly question. That’s the blood — you want to have a good team you recruit. And you recruit very hard. So that put a little push on it. And to be honest, I didn’t want to mislead recruits. Gene and I both felt — not felt, we knew — and that’s what made it now, the decision now.”

Day spent time outside of Ohio in Illinois, Texas and Georgia among his marathon slate of stops — for 2019 commitments top targets — in the days after he assumed Ohio State’s head-coaching duties on the trail.

After he emphasized his plan to prioritize Ohio, the Buckeyes got their first commitment since Nov. 4 in either cycle when they added Cleveland St. Ignatius four-star linebacker Tommy Eichenberg to the 2019 class Thursday.

While the whirlwind has only just begun for Day, who is tasked with filling out OSU’s current cycle between the early signing period from Dec. 19-21 and then the traditional signing day Feb. 6, he understands the increased importance recruiting plays into his new job.

“After we get done here, it’s going to be a sprint to get out and get in homes and get around some of the families,” said Day, who had several in-home visits with commitments in Ohio State’s 2019 class, including Wednesday’s trip to see top-rated recruit and Austin (Texas) Lake Travis five-star wide receiver Garrett Wilson. “Obviously a lot of relationships that are already built there. Some other ones, especially on defense, that maybe aren’t as strong yet. But the response has been great. The response has been strong. And excited to get on the road.”

Smith pointed to Day’s talent and value as a leader, which made the 13-year athletic director keep thinking back to Meyer‘s assistant when he conducted research on candidates elsewhere and backed off his idea of searching nationally for the Buckeyes’ 25th head coach.

“We’re fortunate to have had Ryan in our presence to be able to develop (a succession plan),” Smith said of Day, Boston College’s offensive coordinator from 2013-14, who jumped back into college football after he spent his 2015-16 stretch in the NFL with the Philadelphia Eagles and San Francisco 49ers as a quarterbacks coach under longtime mentor and now-UCLA head coach Chip Kelly. “He has proven that he’s ready for this challenge during this last two years. He understands our higher purpose, which is the total student-athlete development strategy. He understands the profiles of the student-athletes we need to recruit. And the reality is we have a strong infrastructure in place that I know that he has embraced and will continue to embrace.”

The last change, while in basketball, led to Smith poaching men’s head coach Chris Holtmann from Butler after OSU mutually parted ways with Thad Matta after 13 years from 2004-17

“I was looking for a recruiter, I thought I was pretty clear with people that recruiting is big,” Smith told BSB in July 2017. “We have to get back to what Thad did so excellently for a long time – you lock up this state and get into the contiguous states. But we’ve got to lock up this state. And so I was really, really pressing in my profile for a recruiter.”

While certain steps remain unclear for Day, with coaching decisions on the horizon in January despite reportedly retaining four support staffers, the past two seasons he spent under Meyer make his objective for December and beyond abundantly clear.

“His focus is to go recruit — go recruit,” Meyer said of Day. “Make sure the staff’s exactly how you want it. And other than that down the road you can adjust things. But this recruiting gig, that’s all laser lights have to be on that, 100 percent. And I know he’s, first of all, he’s a great recruiter. And I think the way that things are set up here, that can be full-time energy on that and not some other stuff.”