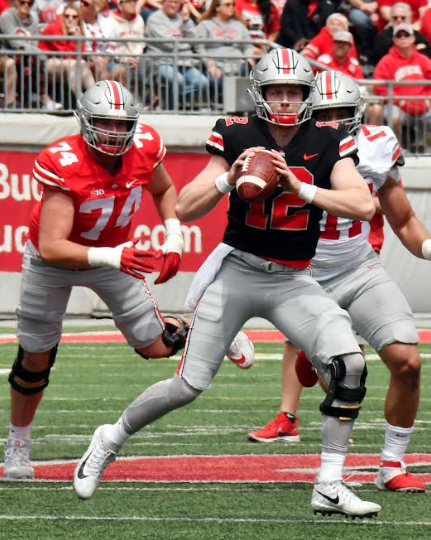 After the Ohio State spring game, sophomore Justin Fields was the only Buckeyes quarterback made available for interviews.

But after the Gray’s 35-17 win over the Scarlet, in which Fields (4 of 13 for 131 yards and a touchdown) and Baldwin (20 of 36 for 246 yards and two touchdowns to two interceptions) both struggled with inconsistency as passers throughout the course of the scrimmage, skill players on Ohio State’s offense saw flashes from each signal caller.

“They played great,” said fifth-year senior H-back K.J. Hill, who hauled in two receptions for 43 yards (21.5 average) with a long of 33. “I liked how they stayed in the pocket with hands in their face. It shows us they’re comfortable back there, but they definitely made strides from the beginning of the spring.”

While the Buckeyes welcomed in Fields (6-3, 223) — the 247Sports composite’s former five-star recruit and No. 2 overall prospect from the 2018 class — Jan. 4 from Georgia, Baldwin (6-3, 215) has been steadily progressing his way up the depth chart since he enrolled early last year.

All the way back from the torn ACL in his right knee that delayed development after he emerged as a four-star recruit out of Austin (Texas) Lake Travis, Baldwin’s path to 100 percent followed with a strong finish to spring camp.

“It was hard for him because when he was here, he really wasn’t able to do much because the timing was such that he came off that knee injury and then the season started and he was really full-time (healthy) and by then, we didn’t want to put him down on the scout team where he had (defenders) coming off the walls at him and he’s getting exposed to getting a guy falling on his knee because it wasn’t there yet,” Day said April 10 after OSU’s 13th practice of spring camp. “So he was with us and he was kind of in the back taking mental reps while Dwayne (Haskins) and Tate (Martell) were taking most of the team reps. So he really wasn’t doing a whole bunch. He was trying to (develop). It was all up here (in his head). And it wasn’t easy for him. It was a long fall, but it was the right thing to do because we didn’t want to expose him to getting hit. He wasn’t really confident on that thing yet.”

Beyond his debut last weekend in the Horseshoe, Baldwin’s battle with Fields trickles through summer workouts and into fall camp as he looks to take the next step.

While Fields was the only quarterback to only run the first-team offense in the spring game, extra reps with the first- and second-team units gave Baldwin snaps he needed as his on-field acclimation continues.

“I’ve seen him grow just as much as any other player,” said fifth-year senior H-back C.J. Saunders, who recorded three receptions for 35 yards (11.7 average) — including an eight-yard touchdown pass from Baldwin in the second quarter. “And I’m really, really proud of him for that. He’s really started to come into a groove with his confidence. He has the ability. For him, it’s just telling himself, ‘I can do this.’ Listen, I think once he (does) that, he can really challenge. So for him, just keep winning the mental battle because it’s so much of what it is — his mental battle — and like I said, I’m just really proud of him, how he did out there.”