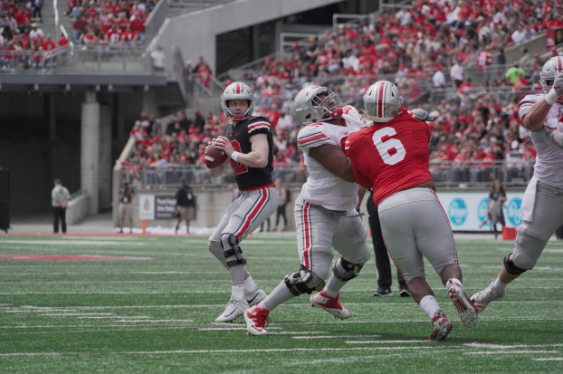 Baldwin had been competing with Georgia transfer Justin Fields, a sophomore, throughout spring camp for the Buckeyes’ starting quarterback position.

Baldwin, an Austin (Texas) Lake Travis product, has spent just one season in Columbus, and during that year he was mainly recovering from an ACL injury.

Baldwin’s departure would open up the starting slot for Fields to take the reigns as the primary signal caller for the Scarlet and Gray. However, losing Baldwin will put the Buckeyes in a hole as far as depth.

If Ohio State is unable to bring in a graduate transfer (which will most likely be a goal of Day’s), then the only other scholarship quarterback left on the roster will be senior Chris Chugunov, a former West Virginia transfer.

Per Letterman Row, those familiar with Baldwin’s thinking attributed the decision more to a desire to be closer to home rather than a concern about future playing time or any issues with the coaching staff. After all, Baldwin waited his turn in high school at Lake Travis, only starting there for one season.

“In high school, I had [Baylor quarterback] Charlie Brewer one year ahead of me, so I had the option my sophomore year to transfer schools,” Baldwin said after the Rose Bowl. “That was competition, and I could have ran away from it and gone to get mine, started some other place for some worse school for three years. But I stuck with it, and I think it eventually made me much better sitting behind him and getting to play my senior year.

More information will be added to this breaking story, so stay tuned.