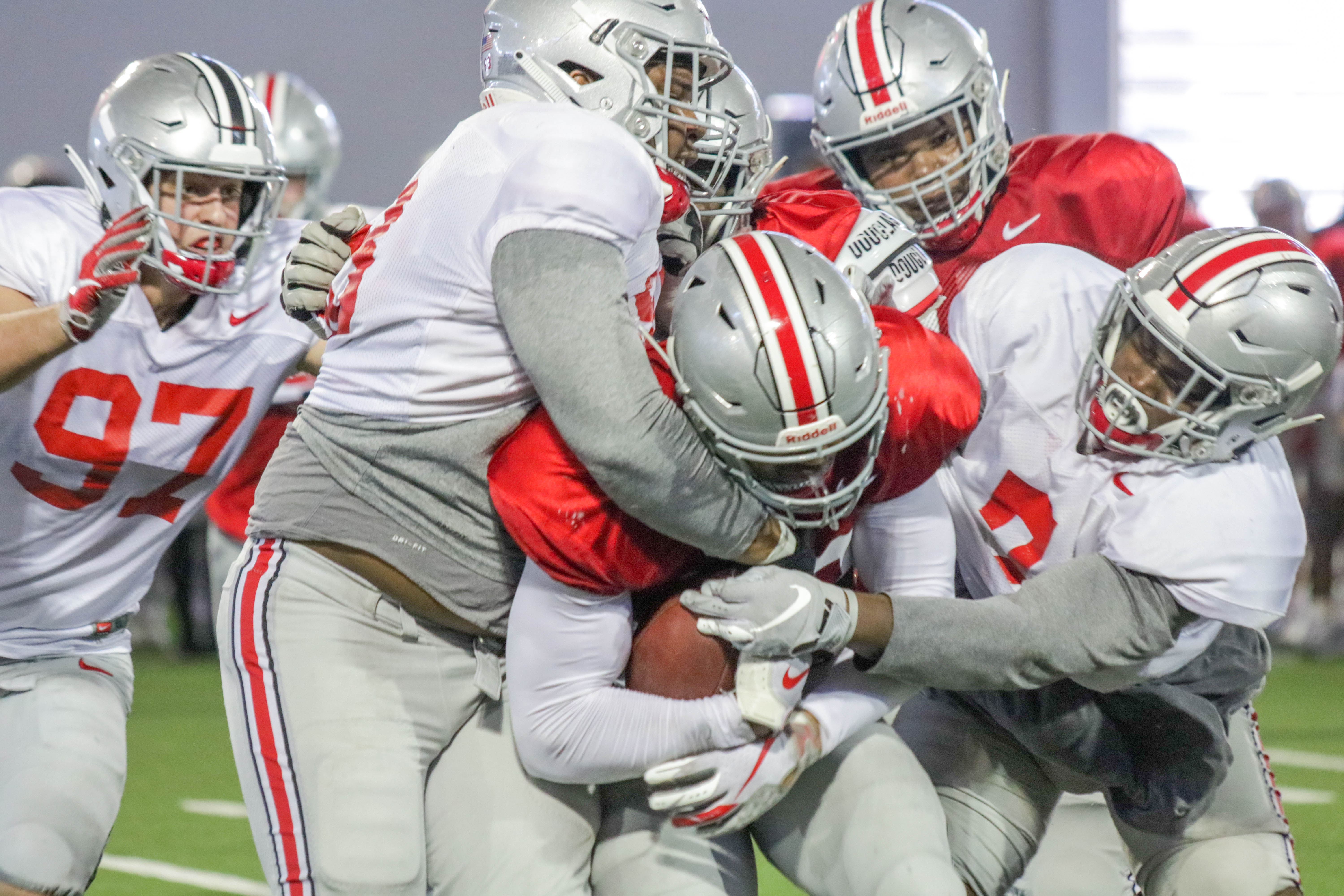 Among those tweaks, Washington was needed. OSU’s linebackers hit the reset button after a pair of up-and-down seasons under former position coach Bill Davis, who left Jan. 8 to pursue NFL opportunities and subsequently landed with the Arizona Cardinals three days later.

As sophomore linebacker Teradja Mitchell (6-2, 242) continues to compete with juniors Tuf Borland (6-1, 232) and Baron Browning (6-3, 248) for the starting job in the middle, he embraces his clean slate under the energetic Washington ahead of the 2019 campaign.

“Him and Coach Davis are both great coaches,” Mitchell said after Ohio State’s fourth practice of spring camp. “They both invested a lot of time into us and helping us get better. Coach Washington — he’s a younger guy, has a lot of energy. But they’re both great coaches and definitely appreciate both of them.”

Like Mattison, Washington spent the previous year at Michigan, where the two assisted the Wolverines — among other achievements — to the No. 2 total defense in college football with 275.2 yards allowed per game.

For the Buckeyes, while the defensive line was the unit’s strength, the second level struggled mightily on the 2018 season with 403.4 yards allowed per game — the No. 72 total defense in college football.

The former U-M coaches spent March 6 through April 13 as mentors to OSU’s linebackers, but Washington in particular worked the 15 days of spring practices with purpose for the position group’s aggressive principles — gain ground, create knock-backs and finish on the ball.

“Everybody’s been learning everything, which is great,” Washington said. “It helps you, in terms of trying to put people in positions to play. So it’s been competitive, but guys are working, so it’s awesome.”

As they wait their turn — Gant and Pope finished the spring on the projected second-team defense but remain in the hunt for rotational reps — the underclassmen soak up Washington’s knowledge.

Gant in particular has welcomed Washington’s approach as he aims to elevate his game, following a developmental freshman year on kickoff coverage with Mitchell and Pope.

“I love (Washington),” Gant said. “Energetic guy, comes in with a lot of passion. Loves to coach, loves to coach us. Just brings the energy to us and teaches very well. He goes over the stuff that we should know quickly, he goes over the stuff that we need to know and then he talks to you on a personal level as well about what you need to get better at and stuff like that.”

Several months before Ohio State resumes its action on the field with fall camp in August, the 2019 season figures to put the linebackers in an opportunistic position.

With playmaking chances expected to rise, Washington wants more freedom for the Buckeyes’ linebackers, keeping disciplined eyes while coming down and wrapping up.

OSU has work to do as its defense undergoes the transition before the upcoming campaign arrives, but Washington likes what he sees from his position group so far.

“Honestly, they just kind of have bought in and gone to work,” Washington said. “Everything’s new because you’ve got new scheme, right? So I think that’s tied into it, but there’s no resistance, there’s no — if you’re making a mistake, you’re very rarely making it twice — so I think they’ve taken to it … I try to focus on the stuff that matters, now fixing what they’re doing or encouraging them, that type of deal, so I think they’ve been doing well with that adjustment.”