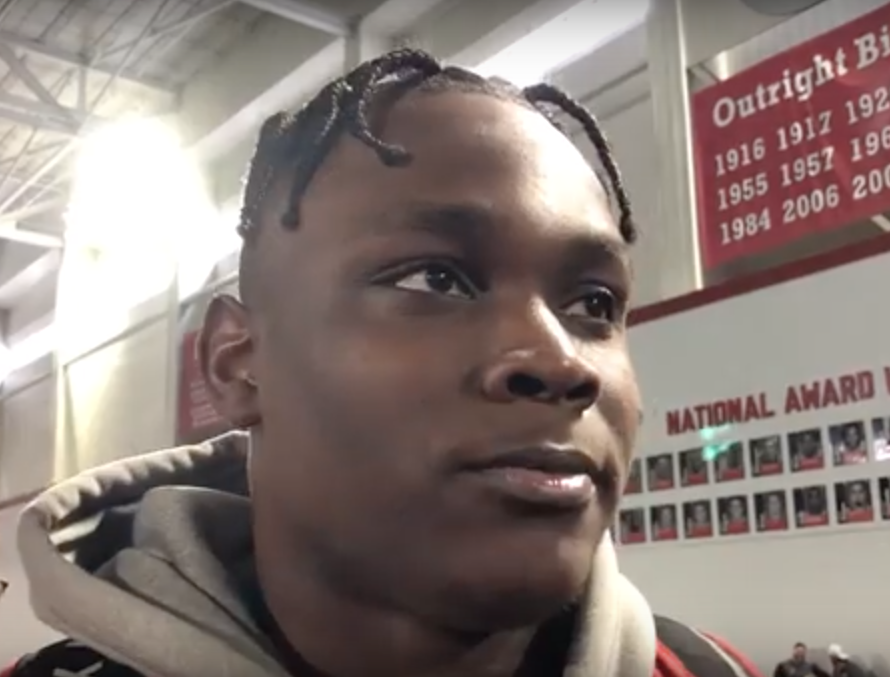 Spring camp marked fresh starts for players old and new on Ohio State’s 2019 roster, and perhaps no one has taken more advantage of the circumstances than Teradja Mitchell.

The sophomore linebacker from Virginia Beach (Va.) Bishop Sullivan spent his 2018 season stashed behind three starters ahead of him, but with an uptick in reps since spring practices picked back up, he surges into camp’s end as a top option at a premium position on the Buckeyes’ defense.

While injuries have hampered juniors Tuf Borland (right knee) and Baron Browning (hamstring), Mitchell has stepped up, manning middle linebacker with the first-team unit during OSU’s fifth practice March 23 and working closely behind Browning in the team’s 11th practice April 5.

“It’s going well,” Mitchell said March 21 after Ohio State’s fourth practice. “Definitely getting a lot more reps than I did last year. Everybody’s just getting developed, learning the new defense. So everybody’s getting an equal amount of reps, everybody’s getting better. So I would say it’s a great spring right now.”

After he debuted in the 2018 campaign with 10 games on special teams, notably kickoff coverage, Mitchell makes progress as his exposure to defense continues.

Mattison and Washington, whom Day stole from Michigan, work directly with Mitchell and the position group as the scheme simplifies and lets the linebackers play free — which fits the 6-2, 242-pounder’s game in particular.

“My style of play, I’m aggressive,” Mitchell said. “I like to thump, play inside, play in the gaps. So I feel like that’s the best fit for me.”

Borland (6-1, 232) and Browning (6-3, 248) remain the veterans in the room while the competition at middle linebacker is expected by Day to trickle into August’s fall camp, but Mitchell has left an impression ahead of the April 13 spring game.

“Teradja’s been there every day,” Day said April 5. “He’s done a good job on special teams.”

Washington echoed those sentiments March 21 when he shared his thoughts on Mitchell and the push from the sophomores such as Dallas Gant (6-3, 232) and K’Vaughan Pope (6-1, 231) to compete in the position group.

Mitchell believes he started his career slow upon summer enrollment last June, coming to Columbus in poor physical shape and subsequently falling behind.

Now with a full year under his belt as he nears the end of the spring, he looks back on the past 10 months and sees the progress.

Mitchell hears the outside buzz from fans on social media who pull for the former four-star recruit in the 2018 class — the 247Sports composite’s No. 44 overall prospect, No. 2 inside linebacker and no. 2 player out of Virginia — to win a starting spot.

But as the competition continues, Mitchell keeps the focus on daily improvement — individually and collectively — with getting the linebackers back to playing like the Silver Bullets atop his priorities.

“That’s why we came here — we came here to compete,” he said. “We knew everybody was good, so it helps us get better. That’s not the thought process we’re going through. We’re just going out here every day to work and get better, and the best plays.