Ohio State Drops Out Of WNIT, Ends Season With Loss To Morehead State 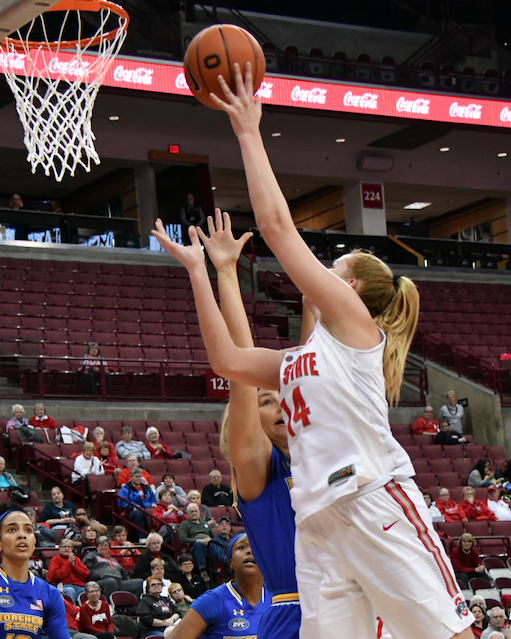 Ohio State failed to take advantage of a postseason opportunity with a first-round matchup Wednesday against Morehead State when the Eagles ran away from the Buckeyes for a 71-61 upset before 1,114 on hand at Value City Arena in Columbus.

The loss for OSU ends its 2018-19 season with three straight losses and dips below the .500 mark at 14-15 overall. Morehead State (24-10) extends its run to March 23-26 in the second round of the Women’s National Invitational Tournament against either Miami (Ohio) or Western Kentucky.

“From a concentration, focus and will-to-fight (standpoint), we just didn’t have the same edge that we had in January and most of February,” head coach Kevin McGuff said when asked by BSB about the team’s second-half collapses against Rutgers (66-56, March 3) and Wisconsin (73-63, March 7). “That’s the hard part because we had made so much progress and then kind of regressed there at the end.”

Juhasz left the game late in the fourth quarter and did not return after she appeared to fall awkwardly on her right ankle. Juhasz got off the floor with the help of team trainers before she walked to the locker room under her own power.

“I think she’s fine,” McGuff said. “She kind of rolled up on her ankle.”

The Buckeyes battled back from a 10-4 deficit through the initial 4:36 of the opening period with a 13-1 run to end the first quarter. Graduate guard Carly Santoro’s layup with 29 seconds left put OSU up 17-11 into the second quarter.

After the Eagles took back the lead, as late as the 4:29 mark of the second quarter, before Ohio State ended on another surge. The Buckeyes ripped off a 9-2 run in the final 3:55, culminated by Juhasz’s layup with two seconds left to beat the buzzer and take a 31-25 lead into halftime.

When the Buckeyes’ advantage blossomed to 38-29 on the precipice of double digits at the 7:14 point, Morehead State clawed back and ended the last 6:43 third quarter with a 19-7 margin. OSU lost its lead with 2:18 left in the period on the first of Jeune’s consecutive three-pointers, failing to break a 45-45 tie after a 4-0 spurt between Miller’s free throws and Juhasz’s layup when Jeune drilled another triple while 42 seconds remained and gave the Eagles a 48-45 edge into the fourth quarter.

“In the second half, once again, we get a lead but we just never played consistently enough to sustain that lead or even stretch it out,” said McGuff, whose team got beat on the boards by a 44-34 rebound margin. “And I think we let them then get comfortable. Now, all of a sudden, they’re making shots that they wouldn’t otherwise make.”

The contest’s last 10 minutes carried more of the same — offensive momentum for Morehead State and fading hopes for Ohio State. After the Buckeyes scored the first bucket of the fourth quarter on graduate guard Carmen Grande’s layup 19 seconds in, trailing 48-47, the Eagles surged ahead. Morehead State’s lead ballooned to 59-49 with 5:14 left — its largest before the margin was finalized at 71-61 by the final horn.

“It was definitely a tough game to go out to,” said fifth-year senior forward Makayla Waterman, who had a pair of points and rebounds off the bench. “If we did well and we gave it our all, we’d be happy. But I think that was a pretty bad game for us.”