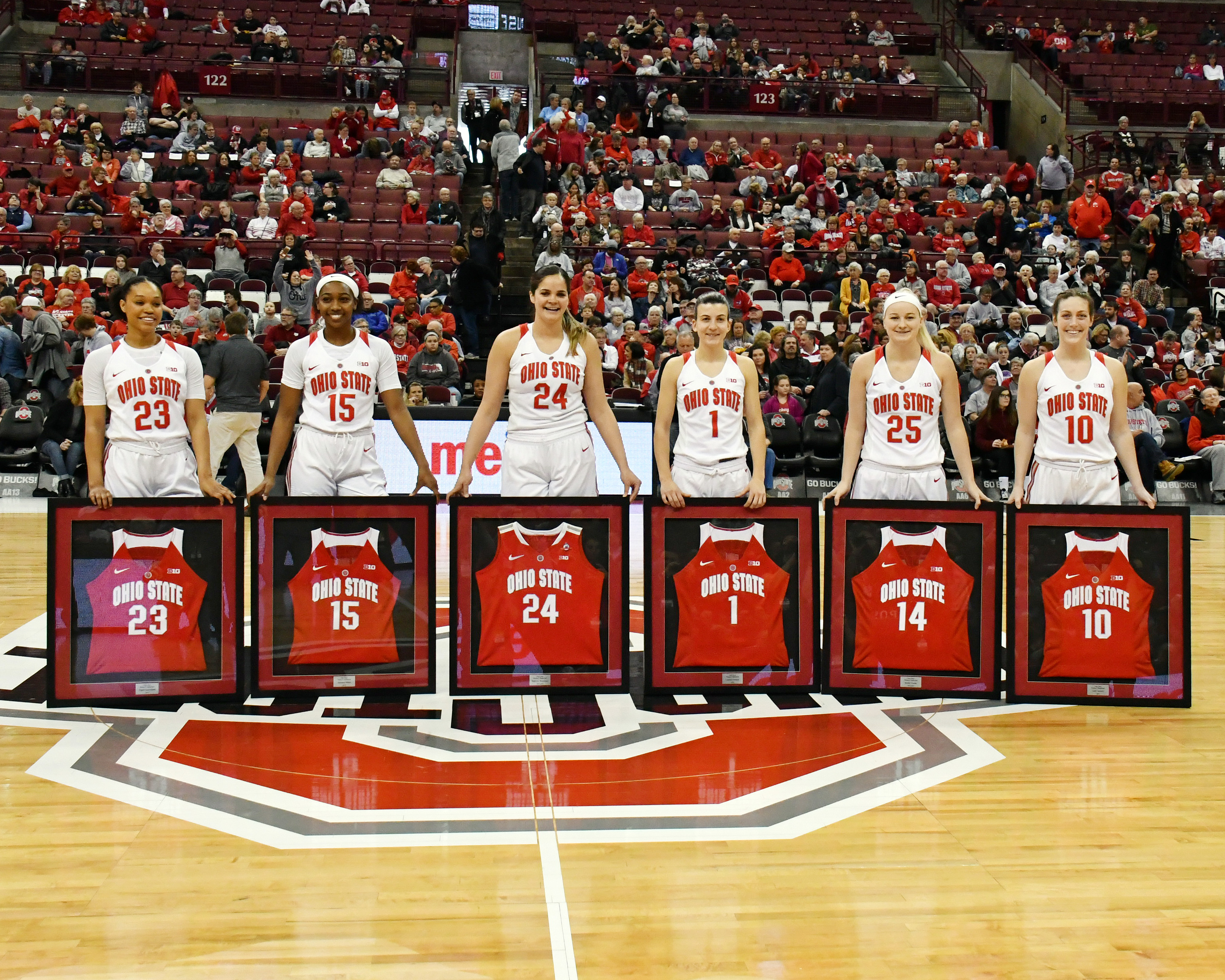 Back on its home floor to close the regular season Sunday at Value City Arena, the Ohio State women’s basketball team led until the fourth quarter of its 66-56 loss to Rutgers. Before a sizable crowd of 5,030 in Columbus, the Buckeyes missed a chance to sweep the Scarlet Knights after Feb. 14’s 59-39 road rout.

While the Buckeyes played for their seniors before they enter the Big Ten tournament March 6-10 at Bankers Life Fieldhouse in Indianapolis, underclassmen rounded out the scoring effort against Rutgers (21-8, 13-5). OSU’s freshman starters, guard Janai Crooms (12) and forward Dorka Juhasz (six), combined for 19 points, while freshman forward Aaliyah Patty pitched in four off the bench.

“We just really came unglued with their pressure and our turnovers,” said head coach Kevin McGuff. “Our ability to handle that just wasn’t very good. The hard part was it was good at times and we handled it and everything was fine, and when it wasn’t, it wasn’t. I think, as much as anything, it was us just not making a mistake and not letting that carry over to the next couple (of possessions).”

The pair of Ohio State freshman starters opened the first quarter strong as the Buckeyes got on the board with Crooms’ three-pointer and Juhasz’s layup through the initial two minutes, setting up Grande’s triple and resulting in an 8-0 run at the 7:47 mark. Rutgers stopped the drought on Jordan Wallace’s put-back layup at the 6:59 point, but OSU struck back five seconds later with Santoro’s fast-break layup at the other end to command a 10-2 lead.

The Knights responded with Zipporah Broughton’s fast-break jumper at the 5:31 point, but Ohio State created further separation on a 7-0 spurt to go up 17-4 with 2:13 left. Rutgers put up a pair of free throws from Arella Guirantes before the Buckeyes added five more points on Crooms’ jumper and Miller’s trey, surging ahead 22-9 after Tekia Mack’s three with 43 seconds to go gave the Knights a response.

Action slowed down in the second quarter when Rutgers started up 7-2 and cut OSU’s lead to single digits, 24-16, at the 7:34 mark. Ohio State went back up double digits after Santoro’s jumper and Juhasz’s layup, around Stasha Carey’s layup, put the Knights down 28-18 at the 6:03 point.

Rutgers rallied behind five straight points from Broughton, bringing the score to 28-23 with 3:49 left before Patty’s layup 14 seconds later stopped the potential run and started one for the Buckeyes. Waterman’s jumper at the 2:42 mark, followed by free throws from Grande and junior guard Jensen Caretti, summarized a 10-2 spurt for OSU — culminated by Santoro’s three-pointer with 23 seconds to go — burying Rutgers 38-25 at halftime.

The Knights came out fired up for the third quarter with a 5-0 strike from Carey’s layup and free throw to Guirantes’ layup, and McGuff called timeout as Ohio State’s lead shrunk to 38-30 at the 9:23 point. Mack’s layup at the 8:37 mark made the Rutgers run 7-0 before Santoro seemed to give the Buckeyes an answer with a triple at the 7:30 point, going up 41-32, but the Knights responded with buckets from Guirantes and Broughton for a 41-36 margin with 6:47 left.

Rutgers kept its foot down, swishing four free throws and cutting OSU’s lead to 41-40 — an 8-0 run since Santoro’s trey and 13-2 advantage since halftime — at the 3:47 point. Crooms stopped Ohio State’s bleeding two seconds later with a pair of free throws, sparking a 9-6 edge in the last 3:45 to lead 50-46 over the Knights into the final 10 minutes.

Rutgers came out in the fourth quarter with a 10-1 run, taking a 56-51 advantage into the 5:53 mark. Ohio State’s only score came at the 8:59 point on Santoro’s free throw, allowing the Knights to take their first lead of the game with 6:14 left after Broughton’s three put the Buckeyes down 53-51, followed by Charise Wilson’s make from long range the ensuing possession.

OSU called timeout, trading three-pointers between Broughton’s make at the 4:34 mark and Waterman’s response 21 seconds later. Ohio State tried to cut into Rutgers’ lead with Santoro’s two free throws at the 3:23 mark, but the Buckeyes remained cold from the floor and Guirantes’ layup with 2:22 to go gave the Knights enough cushion as they closed out their 20-6 frame for the 66-56 comeback.

Broughton and Guirantes led all scorers with 19 points apiece, complemented by Mack’s 14 to pace the Knights in double figures. Rutgers shot 39.0 percent (23 of 59) from the field and 20.8 percent (5 of 24) on three-pointers.

“It just came down to our turnovers,” Waterman said. “We couldn’t take care of the ball. It was working for us for a while … but it caught up with us. If we want to win any games, that can’t happen. I think we know that. We’re just getting frustrated with ourselves. I think that fourth quarter was all because of turnovers.”