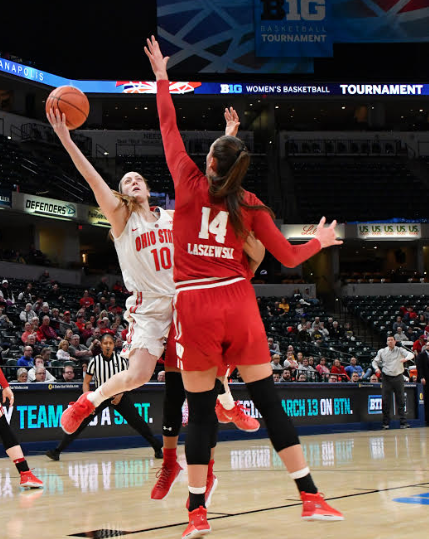 INDIANAPOLIS — After a double-digit halftime lead, Ohio State failed to keep its foot down in the third and fourth quarters. Wisconsin caught fire in the second half, where the 13th-seeded Badgers outscored the fifth-seeded Buckeyes by 20 points and delivered a shocking 73-63 upset before 3,173 on hand Thursday afternoon at Bankers Life Fieldhouse.

“We had talked about before the game, ‘We’ve got to be the hardest-playing team,'” head coach Kevin McGuff said from the bowels of the arena after the game, outside an OSU locker room with blank stares. “And I think we were the hardest-playing team in the first half, but they played harder than we did in the second half. We quit defending, and that’s what happens when you do that.”

Graduate guard Carmen Grande led Ohio State with 12 points and seven assists while freshman forward Dorka Juhasz added a double-double on 10 points and 16 rebounds, but the Buckeyes had no answer for the Badgers’ senior duo of Kelly Karlis and Marsha Howard. Karlis (game-high 24) and Howard (23) combined for 47 of UW’s 73 points, with 32 from the pair in the second half.

Ohio State led all the way until the fourth quarter — the same story from its 66-56 loss to Rutgers on Sunday. After a 16-point collapse against the Scarlet Knights, an identical result followed the Buckeyes to Indianapolis.

“I definitely thought (the Rutgers result) was behind us,” Grande said. “Coming into here, it was a fresh new game.”

Aside from Wisconsin’s three-pointer from Karlis at the 6:37 mark, Ohio State took advantage of the Badgers’ offensive woes through the first 5:25, jumping out to a 7-3 lead. Santoro started OSU off with a layup at the 7:40 point to break a drought of two-plus minutes from both sides. Crooms doubled Ohio State’s edge to 4-0 with a fast-break layup 32 seconds later and drained a triple with 6:02 left to put the Buckeyes in front by two buckets.

Ohio State offset UW’s late-period surge thanks to Santoro’s and-one layup with 11 seconds left and took a 15-12 edge into the second quarter. The Buckeyes shot 7 of 14 (50.0 percent) from the field with 12 points in the paint.

Ten seconds in, Juhasz splashed a three from the corner and Grande did the same at the top of the key on the ensuing possession as OSU jumped out for an 8-2 run after Miller’s floater rattled home and built the lead to 23-14 with 7:44 left. Ohio State took control from there, extending the run to 11-2 when Grande’s second three-pointer went through and put Wisconsin down 26-14 at the 6:20 mark.

Karlis kept the Badgers within single digits with a triple at the 4:23 point after a timeout, but the Buckeyes stuck back with three free throws from Juhasz and Santoro to stay up 29-17 as 1:38 remained. UW sank two free throws from Kendra Van Leeuwen at the 1:12 mark before Crooms and Howard traded treys in the final minute, keeping OSU ahead with a 32-22 halftime lead.

Ohio State kept its lead at 10 points through the first 1:07 of the third quarter, but Wisconsin crept back into the ballgame on 8-1 run, cutting the Buckeyes’ lead over the Badgers to 35-32 at the 4:44 media timeout. The teams traded triples before Miller’s make from long range in the corner sparked OSU’s 8-2 run — all points coming by Miller, who added a layup and another trey — to go up 46-37 with 1:26 left, but UW answered with consecutive threes from Karlis and Gilreath in the last 1:05, trailing 46-43 entering the final 10 minutes.

“I don’t know what happened at halftime, but we came out and they just got … a really good run,” Juhasz said. “They were tougher. It’s hard to say, but they were tougher.”

Wisconsin’s surge spilled into the fourth quarter when the Badgers opened the first minute with back-to-back buckets from Howard, who gave UW its first lead — 47-46 at the 9:14 point. Ohio State initially gave Ohio State the response the Buckeyes needed with an and-one layup at the 8:46 mark, putting OSU back on top 49-47.

But a back-and-forth sequence ensued with Crooms’ layup between consecutive Wisconsin threes, putting Ohio State down 55-51 after Howard’s two free throws at the 6:53 point. Searching for answers, McGuff called timeout five seconds later as the Buckeyes tried to regroup.

OSU came out with a costly offensive foul on Miller, handing the ball right back to the Badgers out of the break. UW kept going, running away with an 18-12 advantage en route to the 73-63 final.

Back at .500 for the first time since Feb. 17 when they were 12-12 after the initial win over the Badgers, the Buckeyes await their postseason fate with the WNIT, which announces its 64-team bracket on March 18. OSU needed four victories to defend its Big Ten tournament title and earn the conference’s automatic bid for an appearance in the NCAA tournament.

“We’ve had success in this tournament and we didn’t have it today, though,” McGuff said. “But I told them — we didn’t play hard enough in the second half, and you don’t get a chance to do it over.”