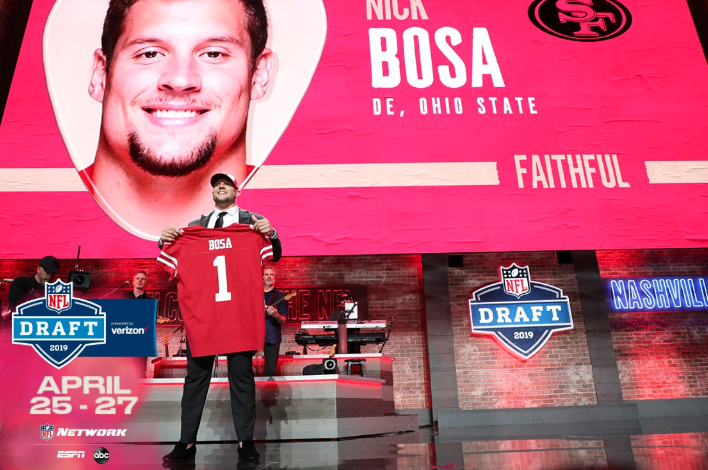 As he went through his process throughout the past four months, Nick Bosa knew where he wanted to begin his NFL career.

After the San Francisco 49ers selected him with the second overall pick when the first round of the 2019 draft got underway Thursday in Nashville, Tenn., the former Ohio State defensive end (2016-18) started his next chapter how he had hoped.

With several family members and a mentor in Buckeyes defensive line coach Larry Johnson on hand, Bosa walked onto the stage, shook league commissioner Roger Goodell’s hand and flashed a smile as he traded his scarlet and gray for scarlet and gold.

“It means everything,” Bosa said. “Just (a) storied franchise, they know how to win and I think they’re on the right track, so I’m excited to be a part of it.”

On his journey from Columbus to San Francisco, Bosa was often linked to the 49ers.

After he tested and performed March 2 near the end of the NFL scouting combine at Lucas Oil Stadium in Indianapolis, Bosa stood on his numbers during OSU’s March 20 pro day but had dinner with San Francisco brass later that night.

For general manager John Lynch and head coach Kyle Shanahan, Bosa was the pick the 49ers had in mind all along before they pulled their trigger on the 2017 All-American.

“Nick Bosa is a player who we have long coveted and grown in our appreciation,” Lynch said. “Probably every time we watch him, it gets better and we’re very pleased to have him a part of our organization. I think he adds to a very talented group on the defensive line as something that Kyle and I had as a priority when we got here.”

The 6-3 3/4, 266-pounder’s pass-rush prowess has been evident since he signed his letter of intent with Ohio State’s 2016 recruiting class as a five-star prospect from Fort Lauderdale (Fla.) St. Thomas Aquinas.

In the time since then, Bosa racked up 17 1/2 sacks — among other numbers — across 30 games with the Buckeyes.

San Francisco’s 4-3 scheme provides an opportunity for Bosa to step in immediately, with the 49ers seeing the OSU product as more than just a situational edge rusher.

“I see him as a three-down player,” Shanahan said. “He’s got to come in and do it, but he plays the run well. His best strength is rushing the passer, but he can play in all three downs and play all situations.”

When the Arizona Cardinals — as expected — elected to take for former Oklahoma quarterback Kyler Murray at No. 1 overall, Bosa fell into San Francisco’s lap.

Seven months removed from Sept. 20 surgery for his core muscle injury, which ultimately resulted in him leaving Ohio State for health rehabilitation and combine preparation, he heads to the 49ers at 100 percent with immediate-impact potential.

“I think it was necessary to be healthy by this time,” said Bosa, who went down just three games into the Buckeyes’ 2018 campaign, leaving early Sept. 15 in the third quarter of the 40-28 win over TCU. “I think it would have (altered my position) here if I even tried to come back, so it was a season-ending injury and I really needed to get my body right before I even thought about playing again.”

Bosa, who recorded 77 tackles (29 for losses) and forced two fumbles with a pair of recoveries as he terrorized opposing Big Ten offensive linemen through two years and change, left more than enough on tape for San Francisco to like.

Lynch remembered former OSU defensive coordinator Greg Schiano (2016-18) when he broke down his impression of Bosa before the 49ers finally went on the clock.

“Nick has a tremendous first step,” Lynch said. “He gains a ton of ground. It’s incredibly quick. But I think (Bosa has) a mix of speed and power, and then he’s an absolute technician with his hands. Kyle jokes a lot, ‘It looks like he’s been, since 3 years old, doing pass-rush moves with his family.’ He’s so proficient with it.

“Greg Schiano, down at a visit … I think he captured what my eyes were seeing, what our eyes were seeing better than anyone when he said, in all his years of coaching, he’s never had a player whose hands and feet are married together better than Nick Bosa. So that’s what we see and he’s not only incredibly talented, powerful, fast, but he’s very efficient in the way he plays. You put that together and I think you have a pretty special package.”

Hungry for his return to the gridiron, Bosa embraces the star potential he emits in the eyes of Lynch and Shanahan.

“(They are getting) somebody who’s going to work so, so hard,” Bosa said. “Somebody who’s not going to be comfortable with being average. I’m going to go into every practice and find new ways to get better and that’s what I love about football. You have to really focus on something if you really want to get better at it and rep it over and over again.”