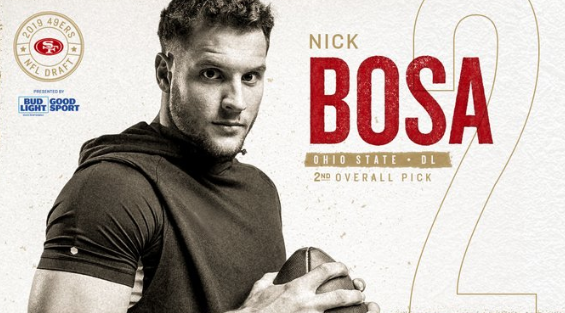 Nick Bosa became Ohio State’s first player taken Thursday when the San Francisco 49ers selected the three-year Buckeyes defensive end (2016-18) with the second overall pick in the first round of the 2019 NFL draft.

The 6-3 3/4, 266-pounder and former five-star prospect from Fort Lauderdale (Fla.) St. Thomas Aquinas in the 2016 recruiting class quickly became a star at OSU.

Before he saw his collegiate career cut Oct. 16 short due to a core muscle injury that required surgery as a junior in 2018, Bosa tallied 77 tackles (29 for losses), two forced fumbles, two fumble recoveries and 17 1/2 sacks across 30 games.

Since he stepped away from Ohio State, dropping out midseason to focus on his injury rehabilitation and draft preparation, Bosa impressed March 3 during the NFL scouting combine at Lucas Oil Stadium in Indianapolis.

Bosa solidified his status as a top-three lock, proving a full recovery six months after the season-ending procedure Sept. 20.

He moved well during position drills, which came after strong testing numbers between a 4.79-second time in the 40-yard dash and a 29-rep result on the 225-pound bench press.

Bosa stood on those combine numbers, attending pro day March 20 at the Woody Hayes Athletic Center but choosing to spectate rather than participate.

While in Columbus, Bosa had dinner with the San Francisco 49ers.

He continued to draw interest from Arizona shortly after, having dinner with Cardinals brass March 29 in his Fort Lauderdale hometown.

The NFL is in Bosa’s blood, following his older brother Joey’s footsteps after he was selected by the Los Angeles Chargers — then of San Diego — with the third overall pick in the 2016 draft’s first round.

Their father John was also a first-round selection, taken by the Miami Dolphins with the 16th overall pick in the 1987 draft.