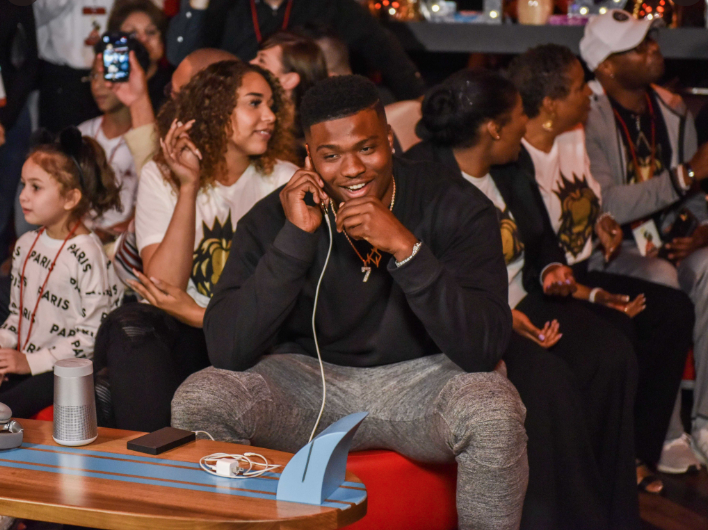 After the New York Giants selected Duke’s Daniel Jones with the sixth overall pick in the first round of the 2019 NFL draft Thursday, Ohio State’s Dwayne Haskins smirked and shook his head when he heard commissioner Roger Goodell announce the news.

Far away from the draft’s opening night action in Nashville, Tenn., Haskins watched the broadcast with family and friends at the local bowling alley Bowlmor Rockville in Gaithersburg, Md., as 14 teams passed on him.

The move took nine more slots, but the Buckeyes’ 2018 starter finally received his phone call when the Washington Redskins selected Haskins with the 15th overall pick after he fell to the middle of the first round — the third quarterback taken, following Jones and Oklahoma’s Kyler Murray, the latter of whom the Arizona Cardinals grabbed with the first overall pick.

As a result, Haskins has newfound motivation.

While he approaches an ideal situation in a homecoming of sorts — Haskins has family from Gaithersburg, Md., and attended Potomac (Md.) Bullis School — his fire is burning after several quarterback-needy franchises passed on him.

“To be honest, I’m more motivated now than ever,” Haskins told Jen Lada of ESPN. “There’s a bigger chip on my shoulder. The league done messed up.

“I’m just blessed by God, blessed for my family — I’m right down the street — so we’re going to do it right this time, so it’s crazy.”

Maryland made Haskins, but New Jersey raised him.

Before he signed his letter of intent with the Buckeyes as a four-star prospect from the 2016 recruiting class, Haskins grew up in Highland Park, N.J., and rooted for New York.

After he expressed a desire of playing for the Giants and learning behind veteran starter Eli Manning, Haskins instead heads across the NFC East to a division rival, competing against his childhood team and looking to prove them wrong during a different homecoming.

“I mean, family’s everything, right? Basis of foundation,” Haskins said. “All these people right here are right down the street. Just to think that I started here in high school and I didn’t have a chance to go to Maryland, and now I’m going to come back to the area and we’re going to do it right this time.”

Haskins (2016-18) previously committed to Maryland before flipping from the Terrapins and heading to Columbus.

He started his career behind the likes of J.T. Barrett (2013-17) and Joe Burrow (2015-17), waiting his turn before he emerged in 2018 as a Heisman Trophy finalist while leading OSU to a 13-1 record with Big Ten and Rose Bowl championships.

As the road leads him back home, Haskins has a chance to compete in Washington, entering the quarterback room with Case Keenum and Colt McCoy while also learning from Alex Smith.

“We’re excited, obviously, to get Dwayne,” Washington head coach Jay Gruden told local media Thursday during a press conference after the first round wrapped up, in which the Redskins selected Haskins and Mississippi State edge rusher Montez Sweat (No. 26 overall). “A quarterback that has performed like he has in one year of playing football is quite astonishing, really. He’s got all the tools to be an exceptional quarterback in pro football. So that’s a matter of getting him in the building, get him taught up with the offense and just going slow with him.

“We’re excited to have him. Great kid, great player, very smart. We had a chance to talk to him at the (NFL scouting) combine, obviously. We flew him in here, had a long talk with him, went to dinner with him. Spent a lot of time with him and we feel really good about where he is as a player, where he’s going.”