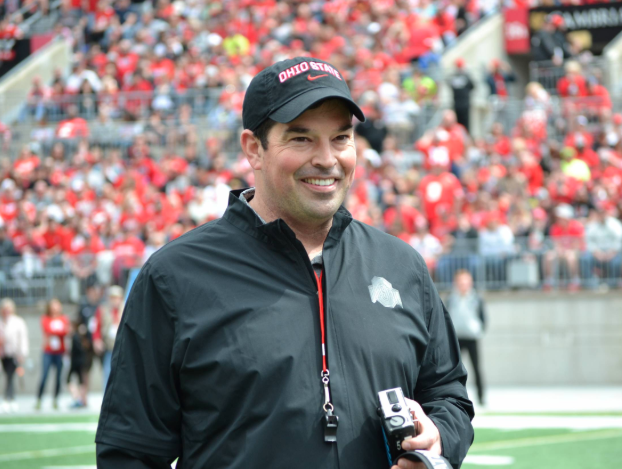 Since the calendar flipped to May, head coach Ryan Day and the Ohio State staff have hit the recruiting trail hard.

The Buckeyes closed out April with post-camp recruiting activity in the form of list cuts for the 2020 cycle and a major commitment from the 2021 class.

In the time since then, Day and assistant coaches have branched out efforts for 2020, 2021 and even 2022, highlighted by offers to over a dozen recruits listed below.

Hardy has since added opportunities from Tennessee (May 1), Kentucky (May 2), Auburn (May 2) and Central Florida (May 3).

Felix, who additionally had Mississippi State (April 10) among three early bids with Purdue and LSU, also gained UT and UCF on the same dates while Florida State (May 2) entered the mix.

The first of many offers in the Lone Star State for the week, the Buckeyes went southwest May 1 and offered 2021 tight end Dametrious Crownover.

The 6-6, 235-pounder from Grandview, Texas, had exploded over the previous two days with more than half of his initial 12 bids — Arizona State, LSU, North Texas, Purdue, Texas Christian and Colorado — entered the equation. He has since added an opportunity from Georgia (May 3), bringing the count to 13.

According to 247Sports, Crownover is the No. 73 overall prospect, No. 2 tight end and No. 12 player in Texas for 2021. While he has potential to play defensive end, his recruitment is currently led by offensive coordinator/tight ends coach Kevin Wilson and offensive graduate assistant/assistant tight ends coach Trey Holtz.

I am beyond blessed to have received an offer from THE OHIO STATE ⭕️‼️ pic.twitter.com/XWz7ckttwE

I would like to thank @OhioStateFB for extending me an offer and the jboy process for making me the young man I am‼️ @247Sports @247recruiting @OhioStateAlumni @Rivals @Jboy_Recruits pic.twitter.com/jslLEbSFKG

Ohio State’s evaluation of wide receivers in 2020 led to an offer May 3 for Norfolk (Va.) Maury four-star KeAndre Lambert. The 6-0 1/2, 172-pounder’s 27th scholarship overall followed Miami (Fla.) and Louisville entered the race in April, adding to his list of Clemson and Texas A&M, among others.

Named the wide receiver MVP after The Opening Regional D.C. at the St. James Sports, Wellness and Entertainment Complex in Springfield, Va., he now heads to The Opening Finals from June 30-July 3 at The Star in Frisco, Texas. Lambert is the 247Sports composite’s No. 244 overall prospect, No. 45 wide receiver and No. 4 player in Virginia for 2020.

After he added Penn State, Illinois, Notre Dame and Georgia to his list since May 1, 2021 all-purpose back Will Shipley picked up another big offer May 4 when the Buckeyes extended one.

The next day, he reached double digits with North Carolina State. The Wolfpack joined Michigan and Penn State, among others, in the previous two weeks.

Blessed to receive an offer from THE Ohio State University. pic.twitter.com/3A6Bo2C7a0

Ohio State stayed in the DMV area May 7 with its offer to Baltimore Mount Saint Joseph’s Dont’e Thornton.

The 6-4, 179-pounder committed Feb. 2 to Penn State but has since added scholarships from Oregon, West Virginia and Tennessee. Among those bids, Thornton has shown interest in exploring opportunities outside of the Nittany Lions, taking a visit May 5 to see the Mountaineers.

The first of two offers May 7 at Jersey City (N.J.) St. Peter’s Prep, the Buckeyes extended a scholarship to 2020 four-star outside linebacker Cody Simon with co-defensive coordinator/secondary coach Jeff Hafley and linebackers coach Al Washington in the New York metropolitan area. The 6-1, 218-pounder’s 18th overall bid followed Vanderbilt (May 1), Miami (April 9) and Kentucky (April 9) in the past month.

The younger brother of Notre Dame sophomore linebacker Shayne Simon (6-3, 230), Cody Simon possesses an opportunity with the Fighting Irish (April 6, 2018) as well. Simon is the 247Sports composite’s No. 187 overall prospect, No. 14 outside linebacker and No. 5 player in New Jersey for 2020.

Extremely honored to have received an offer from The Ohio State University‼️ pic.twitter.com/ULVz6oTEUe

Keith Miles Jr. was OSU’s second offer May 7 at St. Peter’s Prep, picking up his 17th overall scholarship. He added opportunities from Alabama (May 3), Kentucky (May 2) and Boston College (May 1) throughout the previous week.

I am blessed to have received an offer from @OhioStateFB thanks #Buckeyes @CoachJeffHafley @CoachRyanDay pic.twitter.com/qMX6ssStlj

The Buckeyes became the 13th overall offer May 7 for Argyle (Texas) Libert Christian 2022 safety Cristian Driver. He announced an opportunity the next day from Baylor, upping the list to 14.

Before he even started his freshman year of high school at Forth Worth (Texas) Nolan Catholic, Emeka Megwa earned an offer June 9, 2018, from Baylor.

The 6-0, 200-pounder’s list has since ballooned to 11 bids at the FBS level with OSU becoming the latest May 7.

Also May 7, Nebraska and Texas extended scholarships to the 2022 running back.

#AGTG I AM EXTREMELY BLESSED TO RECEIVE AN OFFER FROM THE OHIO STATE UNIVERSITY!!! pic.twitter.com/2ypzksA7EN

Following the footsteps of two former four-star defensive ends in Jayson Oweh (6-5, 250) and David Ojabo (6-5, 252), Aaron Armitage appears to be the next big lineman from Blairstown (N.J.) Blair Academy. Ohio State targeted Oweh (2018, Penn State) and Ojabo (2019, Michigan) across the past two recruiting classes before they signed their letters of intent elsewhere in the Big Ten, but Armitage is another chance to add an intriguing edge rusher from the Jersey boarding school.

The 6-4, 240-pounder — originally from Toronto — picked up his first opportunity Nov. 5 from Virginia. After he added Rutgers (Nov. 17), Syracuse (Jan. 28), Pittsburgh (March 8 and Penn State (March 13), Armitage blew up entirely in April. Following mid-month opportunities from Vanderbilt (April 16) and Wisconsin (April 17), he saw his list explode as the spring evaluation period got underway. On April 30, Armitage announced four new offers — LSU, Michigan, Purdue and Duke. The next day, Maryland and Boston College entered the mix May 1. The rest of the week included Kentucky (May 2), West Virginia (May 3), Georgia Tech (May 3) and Massachusetts (May 8).