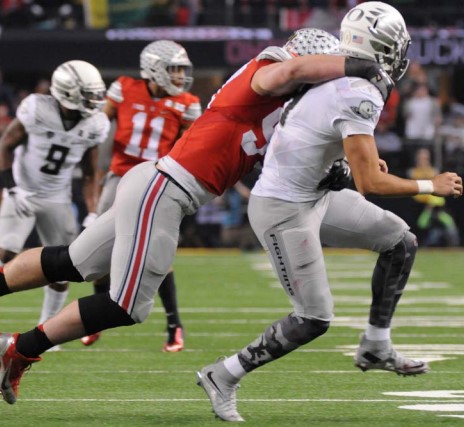 With the return of football up in the air, now serves as a perfect time for reflection on the history of football, and the strategic evolution of the game. To do that, the film study will be spending the offseason looking back at classic Ohio State games. Today’s film study takes a look at Ohio State’s 2015 national title win over Oregon. Video is from this cut-up. Last week’s film study can be found here.

There were only two times in the span of the 2014 season that Ohio State was outcoached or out-gameplanned entering a matchup. The first, against Virginia Tech, saw the Buckeyes falter for 60 minutes against a 46 bear defense that aimed to shut down the read option. With little to no adjustment from Ohio State, the Hokies were able to cruise to the upset. The second came against Oregon in the national title game.

The Ducks came out on the first drive with a perfect gameplan for beating Ohio State’s two-high safety, quarters defense. They went to the flats early to stretch the defense out, loosening up the middle of the defense and forcing the linebackers further outside than they would usually line up.

That started on the first play from scrimmage, with a four-wide bunch look that utilizes a stick concept on both sides of the ball to back those outside corners up, while holding the attention of the linebackers with a handoff fake in the backfield. It works well with Ohio State dropping into a cover 3, as the lineman who drops into the outside zone where the pass is going is slow to arrive to his zone. Marcus Mariota has an easy completion, and Ohio State has something to think about for the next play.

On the next play, Oregon runs another quick hit to the sidelines, this time to the open side of the field away from where the handoff fake is directing the linebackers. The defense is again behind, struggling already with Oregon’s pace, and the result is another easy pass for Mariota.

With the defense a little shell-shocked and eager to defend the flats after those two passes, Oregon goes to a simple handoff with bubble screen fakes to either side. The linebackers, now on high alert for a pass to the edge, bite on those screen fakes just enough to give Oregon an even, five-on-five matchup up front, with just four Buckeye lineman and the middle linebacker to deal with. The blocking is solid, and Ohio State is too spread out to collapse in on the halfback until he picks up a solid gain.

Later in the drive, Oregon opens up the arsenal even further, misdirecting the Buckeyes with a fake to the jet sweep action and running to the short side of the field with Mariota. Oregon only has to block the line and one linebacker again here, so the Ducks pull both guards to serve as a security detail for Mariota, taking on the one remaining linebacker and clearing room for another first down run.

To finish the drive off, Oregon goes back to the play action, and at this point, Ohio State’s defense is, put nicely, a mess. There are openings all over the backfield, and all Mariota has to do is pick his favorite. He does, and just like that, Oregon picks up seven points off of a masterclass in scripted play calling.

Unlike the Virginia Tech game, however, Ohio State had an adjustment for this, and certainly to the delight of the defensive coaching staff, it only involved a change for one player on the defense.

Ohio State’s key to stopping Oregon for the rest of the game is linebacker Darron Lee. Known for his athleticism and aggressiveness thanks to his time as a safety in high school, Lee made a name for himself in 2014 as a missile that could be fired into the backfield. Up until this game, that was his primary role on the team. He set the edge, rushed the quarterback, and played serviceable but not great zone and man coverage. To beat the Ducks, Ohio State put him in the role that he was born to play, using him as a hybrid safety/linebacker who had less of a true zone or man assignment, and more of a general goal to cause as much chaos as he could.

A large part of that job centered around Mariota, the director of the offense. Lee was asked to take the lethal threat out of Oregon’s offense by sticking as close to Mariota as he possible could. As put by Spencer Hall at the time, “the Buckeye defense turned a Heisman Trophy winner into a largely harmless irrelevance with nice numbers and zero danger.” The whole defense was certainly involved, but the dulling of Mariota was primarily a Lee operation, and he executed it flawlessly.

On options like this one, Ohio State used Lee off of the edge to keep Mariota in check and to force a handoff directly into a line that was only focused on stopping the running back.

In the case of a handoff threat to the open part of the field, Lee again drew the assignment, asked to cover the entire far side of the field alone so that the rest of the defense could handle a Mariota keeper to the short side. This play was never going to anyone but Mariota, but the trust that Ohio State had in Lee to do this job still served a crucial role, even on plays like this, because it announced to Oregon that the Buckeyes were supremely confident that only one defender was needed to deal with any of the frills of the offense. When Oregon’s option misdirections aren’t being taken seriously by the defense, they lose their magic. When they can be covered by a single guy, they become even less dangerous.

Lee’s role as “problem causer” for the Ducks translated into the passing game as well. Ohio State deployed him on every blitz imaginable, attacking each offensive lineman at some point in the game to speed up Mariota’s pressure clock, and more importantly, to take attention away from his receivers. When a quarterback is worried about a pass rusher, it becomes an even larger issue than the pass rusher himself. Lee got home a couple times, like here, but the just the threat of a pass rush from that linebacker spot was enough to scare Mariota out of taking bigger risks or holding onto the ball for a tick longer.

While Lee was used mostly as a spy to keep Oregon running directly into the rest of the defense, he had his share of individual excellence as well, perhaps no more so than on these three plays. On the first, Lee is actually designed to be playing man coverage on the halfback heading to the flats out of the backfield, in case the option fake is actually a play action with a quick pass tag attached to it (Oregon had started experimenting briefly with RPOs by this point). Lee sticks with his man but keeps his eyes on the backfield, watching for Mariota to tuck the ball and run.

When Mariota does, Less breaks off the man coverage, sets the edge, and helps bring Mariota down right past the line of scrimmage. This kind of situational awareness and athletic ability is as rare a talent as any in college football, and Lee makes it look completely natural.

In the fourth quarter, with Oregon looking to drive to tie the game, Lee again breaks out the spectacular, this time against a handoff. Playing as an overhang safety to the play side, Lee reads the handoff in the backfield and breaks quickly to set a wide edge, trying to force the halfback inside so that Curtis Grant, the inside linebacker, can wrap him up. Instead of just setting the edge and looking to stack and shed the wide receiver blocking him, Lee gets there early and decides to just make the play himself, as Royce Freeman looks to break outside of Lee’s edge.

Lee destroys the wideout as soon as Freeman cuts outside and ends the play without any drama. Another play with an incredibly high degree of difficulty made to look easy.

The bow on Lee’s performance comes just a play later. Oregon is running a play action with a slant concept that gave Ohio State problems for most of the game. with Mariota hoping to dice in-between the two levels of zone defense, with three defenders in each level. Lee is responsible for the underneath-right third of the field, and his zone ends right where Mariota is looking to hit his target. Without any help in the middle third underneath, and with the deep zone still a bit further down the field, this is primed to be a solid gain with touchdown potential if the deep safety misses a tackle.

Instead, Lee tracks the route once he reads the play fake, and shifts from run defense mode to pass defense mode in a split second, just in time to make a full extension into the air, knocking the ball off its trajectory just enough to keep it short of the target.

This is the most literal example because it very well could have saved a touchdown, but without Lee’s efforts, Ohio State’s result in this game probably looks quite a bit different. There are very few defensive performances more valuable than this one in recent Ohio State history, and Lee did it with an adjustment on the fly against a Heisman winning quarterback in the national title game. The heroes of Ohio State’s national title run have been as well covered as anyone in school history, from Cardale Jones to Ezekiel Elliott, Devin Smith, the offensive line, Joey Bosa and Vonn Bell, but Lee was just as crucial, if not even more so than anyone else on the field against the Ducks.

Ohio State saw what could’ve been on that first drive, turned to Lee to stop it, and he played well-above expectations every single time he was tested.